THE PERKY ONE: Do they look feckless and misdirected by obsessing so much on this issue and not perhaps looking at the big picture? 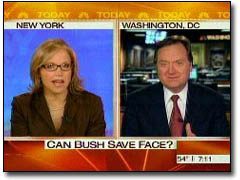 RUSSERT: Well, the commission on September 11th said exactly that, and in the grading that they gave Congress and the administration very recently, they said this is still the one area that is so woefully insecure. If a terrorist is going to bring a dirty bomb into the country, this is how they would do it.

RUSH: It’s one of the ways they could do it. Katie, where were you the last three weeks? Does Congress look feckless? Congress thinks that they’ve never been more heroic than they were yesterday. “I know there are detectors for radiation in every single port, but we only check 5%.” I’m not even sure if that’s true. I hear all these things that get thrown around, I don’t even know if that’s true. Like I said, we need a new regulation. Everybody shipping something into this country that we’re going to take in via one of our ports, the cargo, the box, the container, has to say, big yellow sign, “There is no WMD in this crate,” and that way we won’t have to open it and look at it. There are ways to do this. (interruption) That’s right, if we kill the terrorists they’re not going to be mailing us anything. My reaction is, still, Katie, where were you? Now she’s talking about how this wasn’t any big deal, is Congress perhaps being feckless? Good Lord! You combine this with the fact that now they’re trying to find a scandal in the fact that Bush and Rove (heavy breathing) might have actually interceded under cover of darkness and told the DPW people to yank the deal. All right, here’s something funny. This is Chris Matthews with Margaret Carlson last night on Hardball. The liberals are foaming at the mouth. Margaret and Chris are tangling over whether Matthews actually mentions Katrina in his laundry list of Bush’s problems.

MATTHEWS: Margaret, I look at a pattern of events. They come out of people’s mouths. Conservatives or liberals or whatever. Katrina, the competence question. Miers, that nomination for the Supreme Court that was so bad we’ve almost forgotten it. The Cheney weirdness of a guy not even checking in with the boss after something like that, and now the ports issue. Is there a pattern of not being on base, as we say in baseball, being caught off base by the president?

CARLSON: And you forgot, Katrina.

MATTHEWS: I started with that.

CARLSON: Oh, sorry. It took you so long; I’d forgotten what you first said, sorry.

RUSH: (Laughing) Chris, your questions are too long. Nobody can remember them.