The Giant Sucking Sound is Jobs COMING IN

RUSH: Let me share with you an editorial today in the Wall Street Journal. This editorial warms my heart. It has practically everything in it that I said the first couple, three days of the port deal story. ‘Dubai Ports World finally threw in the on its American operations yesterday, agreeing to sell them ‘to a U.S. entity.’ We hope that entity turns out to be Halliburton, if only for the torment that would cause certain eminences on Capitol Hill.’ I’ve got a sound bite. In fact grab sound bites four and five. They’ll fit well with this editorial. Let’s go back to this program, February 20th, 2006, last month, talking about the port deal. 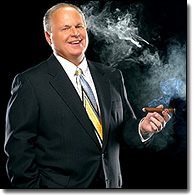 RUSH ARCHIVE: There’s only entity that can bring peace to this whole deal. There is only entity that could successfully run these operations, and that is Halliburton. Now if somebody could persuade whoever it is that’s running Halliburton to intercede on behalf of America, oh, would not that be great? Wouldn’t you love to see the steam? ‘This is a Rove trick! This is a Bush trick! They knew that this would never go! They knew the American people would never stand for the UAE buying these ports, so Halliburton comes in! It was a trick all along! It was a trick all along — and now Halliburton is going to get a steal of a deal,’ blah, blah. I would love it. It’s one of those things that I would make my week, if Halliburton comes to the rescue.

RUSH: That was February 20th. Last night on the news hour with Jim Lehrer, the guest hostette was Margaret Warner interviewing Norman Ornstein of the American Enterprise Institute, and Margaret Warner said, ‘Hey, Norm, the congressional reaction at first sounded a little cautious. How do you read it now? Was it enough to avert a collision?’

ORNSTEIN: They’ve got a dilemma now because there simply American companies that have the know-how and the breadth to do this, interestingly and perhaps ironically what I heard earlier in the day is they were looking at those that have the kind of resources. Halliburton was a name that came up.

RUSH: These guys think that they’re the first to hear something, the first to come up with something! He’s wrong. There are two American companies that do this. They’re small, but the number of terminals here is relatively small. It’s thought that one of them could do it, and neither one of them is Halliburton. Now, anyway, so here’s the Wall Street Journal even suggesting that Halliburton would be a great company to take it over. They’d love to see it just for the fun of it. ‘Dubai Ports was susceptible to this political stampede because it was an Arab-owned company buying port operations, which Democrats have played up as uniquely vulnerable. But this is also the second such mugging of a foreign investor in recent months, following last year’s demagoguery against a Chinese company’s bid to buy Unocal, a middling American oil company.

‘If Members of Congress want a real security crisis — a financial security crisis — they’ll keep this up. What’s especially dangerous here is that we’re seeing the re-emergence of the ‘national security’ protectionists. They were last seen in the late 1980s, when Japan in particular was the target of a political foreign-investment panic. The Japanese were buying Pebble Beach and Rockefeller Center, and so America was soon going to be a colony of Tokyo. A Japanese bid for Fairchild Semiconductor of Silicon Valley was seen as a threat to American defense. Those fears seem laughable now. But here we go again, with new targets of anxiety,’ and I remember the first two days of this reminding you of this exact thing had happened with the Japanese.

I know the Japanese (interruption). Well, they attacked us at Pearl Harbor! You can’t say they were involved in 9/11, but I know they’re an ally now. They’re not part of terrorists. I understand that, but do we know for sure? Anyway…
“Going well beyond Dubai, House Armed Services Chairman Duncan Hunter (R-CA) says he wants Congressional oversight of all foreign purchases of ‘critical infrastructure.’ Mull over that one for a minute. If you think corruption on Capitol Hill is bad now, wait until foreigners need approval from Congress for every multi-billion-dollar investment. The current investment review process was designed by the Reagan Administration to be discreet, and to keep Congress out, precisely to avoid such politicization,” “In recent weeks Members of Congress have suggested that the foreign-ownership ban should apply to: roads, telecommunications, airlines, broadcasting, shipping, technology firms, water facilities, buildings, real estate, and even…”
I just had an idea. Broadcasting? I really like these UAE guys. I like DP World. I wonder if I offered them a stake in EIB…? Let ’em invest in 10% of EIB, give them an investment here, just to show them that we’re not all opposed to them. I’m going to ponder that. Anyway, this list that members of Congress have suggested banning from foreign ownership: “roads, telecommunications, airlines, broadcasting, shipping, technology firms, water facilities, buildings, real estate, and even U.S. Treasury securities. If this keeps up, we’ll soon arrive at France, where even food and music are ‘protected’ from foreign influences as a matter of national survival. The larger truth is that the flow of foreign investment into the U.S. is a sign of economic strength, not weakness.
“For 25 years pro-growth economic policies including monetary stability, steep tax-rate reductions on capital and freer trade have created a giant in-sucking sound of some $4 trillion of global investment into America. Economist David Malpass of Bear Stearns recently calculated that U.S. GDP grew by 100% between 1992 and 2005 while world GDP growth measured in dollars grew by only 70%. Over that same period, the U.S. created four times the number of new jobs as Europe and Japan combined,” and all the while we’re worried about NAFTA and we’re worried about manufacturing jobs going south, the “giant sucking sound” going the way down to Mexico? 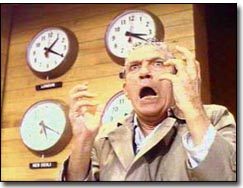 “We’re outsourcing all of our jobs! We’re dead, Rush! We’re alive and dead at the same time and they’re destroying the country!”
Yeah, it was the exact opposite! Can you tell I’m mad about this? At any rate… “The Dubai episode…” This is the last paragraph: “The Dubai episode has been a debacle of the first order, and while the Beltway is toting up winners and losers, the rest of the world is shaking its head and wondering what’s going on. The world’s largest economy and its ostensible political leader seems to be sneering at the very foreign investment that has been crucial to [our] prosperity. Let’s hope it was a momentary hallucination, and not the start of a larger protectionist binge.”
Now, one thing I know that really irritates some of the people who oppose the deal is to be called “protectionists,” and I know that some of them hate to be called racists and xenophobes and all that. So they’re not going to be happy with the Journal here alleging that really what they’re engaged in is protectionism, but I’m telling you: These are some important statistics. Our GDP growth versus the rest of the world, our number of jobs that we created — 283,000 last month, just got the &lt;a target=new href=”http://www.nytimes.com/2006/03/10/business/10cnd-econ.html?hp&amp;ex=1142053200&amp;en=fe80071141baa592&amp;ei=5094&amp;partner=homepage”>numbers&lt;/a> out — wages are up; the economy is roaring. It’s been going great guns, and all the while we’ve had a panicked bunch of people in this country worried about “outsourcing,” losing our manufacturing base, jobs going south. Anybody can spread panic and a lot of people will glom onto it because the fear that “the worst is ahead” is attractive. It’s exciting, and it also offers people an excuse for failure.
“Well, err, outsourcing! That’s what did me in. Singer sewing machine? When they sold that, that did me in.”
So that stuff makes it easy for people to rationalize their problems. But the facts are just the exact opposite.
END TRANSCRIPT