RUSH: (story) “A liberal Democrat and potential White House contender is proposing censuring President Bush for authorizing domestic eavesdropping, saying the White House misled Americans about its legality. ‘The president has broken the law and, in some way, he must be held accountable,’ said Sen. Russ Feingold.” Feingold was on This Week with George Stephanopoulos yesterday, and Stephy said, “Tomorrow in the Senate you’re going to introduce a revolution to censure George W. Bush. Let me show that to our viewers. It says, ‘Resolved that the United States Senate does hereby censure George W. Bush, president, and does condemn his unlawful authorization of wiretaps of Americans.’ It’s a big step. Why are you taking it now?” 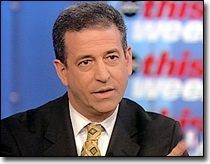 FEINGOLD: It’s an unusual step. It’s a big step. But what the president did, by consciously and intentionally violating the Constitution and the laws of this country with this illegal wiretapping has to be answered. There can be debate about whether the law should be changed. There could be debate about how best to fight terrorism, we all believe that there should be wiretapping in appropriate cases. But the idea that the president can just make up a law in violation of his oath of office has to be answered.
RUSH: I don’t think that has happened. They continue to miscast this as domestic surveillance, and that’s not what this is. So Stephanopoulos says to him (breathless), “If you’re so convinced…! If you’re so convinced…! If you’re so convinced — Oh, gosh, this is so exciting! If you’re so convinced that the president has broken the law, why not just file an article of impeachment?”
FEINGOLD: Well, you know, that’s an option that we could look at if somebody thought that was a really good idea. There are other options out there. In fact, this conduct is right in the strike zone, even though the Founding Fathers, they didn’t have strike zones, they didn’t have baseball, but this is right in the strike zone of the concept of high crimes and misdemeanors.
RUSH: Okay, so the impeachment side is being taken care of by John Conyers because articles of impeachment have to start out there anyway. They start in the House judiciary committee and then they appoint managers and they debate if and they vote on it, and da-da-da-da-da-da-da-da. I told you. I predicted, ladies and gentlemen, every bit of this, and I’ve been doing so since the 2000 election was over. I know you think that they are reacting as though they feel a victory here, and I think it’s the exact opposite. I think they feel defeated. I think they thought the port deal would go on and on and on, and they’re back to impeachment now because the port deal is over, they’re trying to revive the NSA scandal.

They didn’t care about that once the port deal had come up, and so their toadies in the drive-by media are following along wherever they go here, but either way this is going to end up being a rallying call for our side, because if they take the House, if Democrats win the House, they will do this, they will start impeachment hearings if for no other reason than to get even for the terrible injustices done to William Jefferson Blythe Clinton. Now, we’ve got this other Feingold bite. Stephanopoulos says, “Well, I’m not sure the president would not see it as a harsh approach. I’m not sure he’s going to come out and apologize, but in fact I’m pretty sure he won’t do that.”
FEINGOLD: What I’m interested in is my colleagues acknowledging that we as a Congress have to stand up to a president who acts as if the Bill of Rights and the Constitution were repealed on September 11th. We didn’t enact martial law on September the 11th. We still have a constitutional form of government and if the Congress of United States does not stand up for that authority at this point it will be a historic failure of our —
STEPHANOPOULOS: You are the only —
RUSH: Oh, man, oh, man. You know, can I take you back to last week and the last three weeks? The last three weeks the Democrats were excited because they’ve gotten to the right of George W. Bush on, what? National security! They finally found the issue where they could convince the American people that they, too, see an enemy, and that enemy was the United Arab Emirates, and so the port deal went down to a stinging, humiliating end. The Democrats, in less than two days, are now back to the NSA scandal as though we don’t have a national security problem. They’ve taken care of it by icing the sheiks from Dubai.
So now we no longer have an enemy, we got rid of the enemy. I told you this was going to be the case. I said, “If these guys are this serious about national security, then let’s make them answer,” and Feingold has. This is such a gift. This is such a gift. Feingold’s answered without even being asked. I said, “Let’s ask him. Okay, will you allow provisions of the Patriot Act to help ensure that no infiltration occurs at the ports no matter who owns these things because it’s so risky there? Will you allow continued support — or permit continued support — for the president’s National Security Agency foreign intelligence surveillance? Will you do that?”
Feingold just said (interpreting), “No, no. We’re not going to do that.” He’s just said, “We don’t care about national security. We don’t give one diddly-squat about it!” The port deal, I’m telling you again, was not about national security. But the Democrats wanted you to think that they thought it was, but they have now, in less than two days… Well, make it three. No, because it happened yesterday, two days. In less than two days, they have done exactly what I knew they would do. They’ve gotten cocky; they’ve gotten confident, at the same time feeling a little bit disappointed the port deal ended so quickly.
So they have to go back to this impeachment thing, but in the process they’re demonstrating how national security is just something they can pretend to care about when necessary and disregard it when it’s no longer needed. But here’s the kicker, this is the kicker from Feingold yesterday on This Week with Stephanopoulos. Stephanopoulos said, “Are you really positive that this is going to make any difference in our national security? The administration pointed out again and that the security in the ports is going to be done by Customs, done by the Coast Guard. Wasn’t this just the Democrats and some Republicans playing politics?”

FEINGOLD: You know, I’m not certain it’s going to make a difference. But, you know, we have to err on the side of safety when it comes to this kind of an issue. We have to make sure that we do everything we can, and that means not just sort of opening up every kind of port deal to the free market. It would be nice if we could do that, but it’s too dangerous. So we do have to consider our national security in these situations, and I think it’s a good point of caution that the president, I think, would even admit was not the finest hour of his administration.
RUSH: All right, so here’s the kicker. We hear from Feingold; we have to err on the side of safety, side of caution when it comes to the ports. But not when it comes to eavesdropping on Al-Qaeda and terrorist suspects. Now, we don’t want to make any errors there. Err on the side…? He just admitted, “I’m not certain this is going to make any difference in security, whether DPW runs the ports or somebody else does.” Now, as I said earlier in this half hour, liberalism and the modern Democratic Party cannot contain its radicalism and its tendencies to go over the cliff, folks. Now you got Feingold in his censure movement; you’ve got John Conyers trying to push legislation that would call on Congress to determine whether there are grounds for impeachment of the president, and also Feingold’s censure. All it’s about is they’re mad at Bush because he wants to intercept calls made to or received from Al-Qaeda.
This is a classic illustration of what I have been warning you people about regarding these liberal Democrats for the longest time. Every time the president goes down in the polls, they see a wide-open door, huge opening, and they end up telling us who they really are. What they reveal is the kind of thing that will

strike mainstream America as nutty and reckless. Mainstream press will not categorize it that way but the mainstream American population will see it that way. You might have heard some Democrats saying — there’s some media people yesterday on television saying — this is a great effort to keep heat on the White House. Wrong. What it does is elevate an issue that works in our favor, the NSA debate. I mean, that polls dramatically favorably for the president among the American people. Once again, the Democrats portray themselves here as some oddball lunatic fringe movement that has more in common with Ramsey Clark and Saddam Hussein and George McGovern than it does with the average American in a post-9/11 world.
BREAK TRANSCRIPT