Why Did Politicians Listen on Ports, But Not on Immigration?

CALLER: Hi, Rush. It’s a pleasure to talk with you. 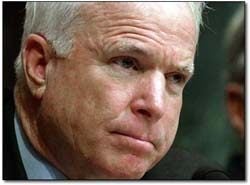 CALLER: I wanted to discuss this bill in the Senate committee sponsored by McCain and Kennedy which they’re calling a ‘guest worker program’ but is — really, if you read the fine print it is — an amnesty program because it puts illegals on the fast track to citizenship.

CALLER: I’m very concerned about this. You know, we have Jon Kyl here, thank God, but then we also have McCain. I think that everybody should be aware of this bill so they can contact their senators and put the pressure on them because it is just horrible.

RUSH: Here is a companion story to this: ‘House members warned Senate leaders yesterday that they will oppose any immigration legislation that goes beyond tightening border security and enforcing current immigration laws. ‘Unfortunately, we have grave concerns about several of the proposals which have been presented to your committee,’ the 70 Republicans and one Democrat wrote in a letter to Senate Judiciary Committee Chairman Arlen Specter, Pennsylvania Republican. ‘We are concerned that some of these proposals are fundamentally incompatible with the desire of the American public for real immigration reform — and their clear opposition to reform proposals that amount to little more than thinly disguised attempts to provide amnesty.” You’re exactly right. There’s a battle inside the Republican Party. The Democrats are hanging back just to see what happens. The Democrats don’t care. They just see potential voters. But the Republicans are actually engaged in the issue and trying to come up with a solution. But I’m glad that you’ve spotted where Senator McCain is on this.

CALLER: Oh. Most of us, I think — most of us conservatives, anyway — in Arizona, we know what he is. (Laughing.)

CALLER: He can pretend to be conservative but he’s not.

RUSH: Well, I know. It’s all going to get flushed out, too, as time goes on. But, folks, look. I really get in talking this way to you sometimes, because I’m Mr. Optimism. I’m Mr. Good Cheer — and I am, and I still am, but there are just certain things that you can start to read the tea leaves on. Like I know (laughing). I know that my taxes are not really ever going to come down significantly. I just know this. I’m 55. I’ve had the dream since I was 20. I know it’s not going to happen. I’m going to keep fighting for it, and the way I’m going to get around it is keep earning more money. When it comes to this immigration business, starting to read the tea leaves here. Now, you need to ask yourselves something — and I’m serious. I’m dead serious about this.

Why, when you raised hell about the ports deal, did they listen to you and they’re not listening to you on immigration? In fact, I was reading… What was it? I have a mental block. It was a journalist, a columnist. It might have been Fred Barnes. Not Fred Barnes. I don’t know. The Washington conservative punditry doesn’t think immigration is a big problem. They think it’s just jingoism. They think people are upset about it for no reason and it’s a cyclical issue that comes and goes, we’ve always argued about immigration. But just ask yourselves: Your elected officials know full well how you all feel about it, and they’re ignoring you. Why do they ignore you on this and they couldn’t to implement your desires when it came to the (whispers) ? Seriously. You ask yourself. Give me your answer on Monday. A little pop quiz.