RUSH: All right. It’s time, ladies and gentlemen, for the moment that I have been waiting the whole program for. I’ve been practicing patience and restraint. I know that there are other more pressing issues, and I have devoted myself to the discussion and exploration of those issues. But now, time to indulge myself. Dadelut dadelut dadelut dadelut dadelut! (That’s the trumpet fanfare. It means an update is upcoming.) It’s our new theme. It’s the Sittin’ on the Ports of Dubai. (Playing of Sitting on the Ports of Dubai spoof.) That’s our old buddy Paul Shanklin with a takeoff on Otis Redding, Sitting on the Dock of the Bay. What a great, great song that is — and port news!

We’ve got two different port deal stories today. First from the American Spectator, and actually, this is nothing that I wasn’t aware of. I didn’t realize how involved these people were. During the initial thrust, if you will, of the port deal story, we gave you every bit of information we could find about it, including what you’re going to hear now. ‘[W]hat do former President Bill Clinton, former Secretary of State Madeleine Albright, former EPA Administrator Carol Browner, and former Clinton Administration lawyers from the White House and the Department of Justice have in common besides their administration time together?’

The answer is this: ‘They all earned millions working for the United Arab Emirates weeks before their roles became public in the sale of American-based port operations to Dubai World Ports. This shouldn’t come a surprise to anyone; in fact, just about anyone who works with the UAE earns millions. But no one has earned more than former President Clinton. To his credit, he has hit up the UAE for more charitable money than just about anyone. By some estimates, the UAE has donated through various means as much as $250 million to Southeast Asia tsunami relief, Hurricane Katrina relief…’ They did. They gave $100 million to Hurricane Katrina relief, and look what it got ’em! It got ’em nothing. It got them thrown out of the United States of America from the port deal.

They’ve also donated lots of money to ‘other humanitarian aid programs. ‘Former President Bush had a hand in that too,’ says a former Clinton associate. ‘But it’s former President Clinton who now has the very close ties to the UAE. He’s the go-to guy now.’ And Clinton himself has done well by this connection. According to knowledgeable sources, Clinton and his library [and Massage Parlor] have pocketed as much as $30 million from this relationship, including his consulting on the UAE/Dubai World Ports deal.’ Now, this is interesting because here it’s back in the news that Clinton did consult. After he consulted, Hillary, his wife, comes out, takes the exact opposite position on the ports deal, and then Clinton has to be told in public by Hillary to shut up, that he’s gotta coordinate anything he says in the future with so that they don’t appear at odds.

The surprising thing to me about this was that he’s been allowed to go out and speak on his own without running it by here, but here it is back again: he did consult. He denied it. (Clinton impression), ‘I never — I never — worked for those people. I mean, I knew they wanted the ports deal. I told them the 45-day thing. They’d go for that, but I didn’t consult these people and advise them on how to get this done. I — I — I — I was misreported in the news.’ That’s obviously not misreported. It was factual. ‘According to sources familiar with the ports deal…’ (Laughing.) I just love those two words. Folks, I know you don’t understand it and I can’t explain it to you, but I just…

‘The ports deal.’ (Laughing.) It conjures up images, you know, J.R. Ewing and just all kinds of nostalgia plus the issue itself, but at any rate: ‘According to sources familiar with the DPW deal, Clinton put the UAE firm in touch with Albright and Browner, who is a principle in Albright’s firm. Browner is said to have brought in several other outside consultants, perhaps some with ties to Republicans. She also brought in former Democrat Rep. Tom Downey, with whom she is said to have close ties. The two attempted to tag team Democrats on the ports deal once it became public.’

They were still advocating for the ports deal to be going through because they were paid consultants on it! It turns out the ports deal was a total Democrat deal. It was a Bill Clinton and his former associates deal — and I was on their side! It’s a shock. I didn’t know it at the time. ”This deal was almost entirely a Democratic operation from the beginning,’ says another former Clinton staffer, who worked in the Clinton White House. ‘Folks like [former Republican Sen.] Bob Dole weren’t brought in until after the [bleep] hit the fan.’ However, former Republican Rep. Vin Weber, whose firm represents the UAE, may have been involved earlier in the process. Yet despite the ‘best and brightest,’ the DPW deal went south once it became public. Democrats on Capitol Hill in particular latched on to the foreign ownership issue,’ and even the Clinton-Albright-Browner could not save the deal. 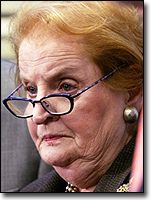 I don’t know what the UAE thinks of these people now, but they were paid and they were hired to get this deal done, and they couldn’t get it done with Democrats up on Capitol Hill. ‘To date, Clinton and others involved prior to the ports deal becoming public, as I said, ‘have not registered as agents of a foreign power with the Department of Justice. No accurate timeline of their involvement in the ports deal has been released.’ Something else I did know and made public at the time. Clinton is out there lobbying and now we know Albright and Carol Browner were lobbying, too, and they have not registered as agents representing a foreign government.

That is against regulations. It’s against the law. But, you know, the Democrats get involved in so many scandals. The Republicans never pursue ’em. They just don’t. They didn’t pursue scandals. I’ve got a list of them here. I’ll get to it in a second. The GOP didn’t pursue half of them. Did you see McCain got booed by a union crowd out there talking about some things? I’ll tell you, there’s (interruption). Yeah. (McCain impression) ‘Shut up! Shut up! I’m leaving if you don’t shut up!’ He was talking about immigration ad he said, ‘All right, who in here wants to pick lettuce for $50 a head?’ And he got some takers! He didn’t expect there would be any takers because he believes that picking lettuce is a ‘job that Americans won’t do.’

For 50 bucks an hour there are a lot of Americans that would go out there and pick lettuce and he was surprised. (interruption) Did you ask me if I would? Is that what you said? No, I wouldn’t. I said there’s some Americans that would. Another ports deal story. ‘Dubai Islamic Bank and Dubai World today announced the launch of the first of its kind $5 billion family of private equity funds to participate in strategic transactions on a global basis. Dubai World is the holding company of Dubai Ports World. The family of funds that will be launched over the next year and a half comprises seven specific private equity funds covering strategic sectors: energy, financial institutions, infrastructure, real estate, health and education, general industrials and technology, and media and telecommunications.

‘Dubai Islamic bank and Dubai Ports World will seed investors in each fund. Sultan Ahmed bin Sulayem, executive chairman of Dubai World said, ‘This project will raise one of the largest and highest profile family of funds in the world as a manifestation of Dubai’s position as a leading financial center.’ The $5 billion family of private equity funds will be leveraged to complete transactions in excess of $10 billion.’ So we iced them out of the ports deal; we froze them out of the ports deal, but did they go skulking away crying in their beer — well, they don’t drink beer. Crying in their whatever. Goat’s milk? No. They did not. They’re making plans to take over the world in other ways now. We’ve just angered them, folks.