Now, folks, how about the immigration breakthrough bill from yesterday? Yeah, what happened here, folks? Why, this thing was slam-dunk! McCain and Kennedy and Hagel, why, it was a slam-dunk! It was going to happen. All this media hype. All the attention on this hole-in-the-wall gang that had their private meeting on Wednesday night. It was Hagel, Mel Martinez, Specter, vice president Lindsey Graham, yeah, and Bill Frist. They had crafted this compromise, and, boy, we’re going to get the immigration bill, we’re going to get this out, and we’re going to make America what America always has been.
We’re going to make America real again. The truth is, they never had a chance. I told you yesterday, what about George Allen? Is anybody talking to him about this? Or Jeff Sessions, or Jon Kyl, are anybody talking… and, lo and behold, they should have been talking to them because they would have found out that there wasn’t one of them that was going to vote for this thing. This thing in a test vote goes down to an embarrassing defeat, 38-60, it lost. And the people on the side of 38 (Laughing) they’re claiming that they’ve been cheated, well, not that they’ve been cheated, but it’s just not right, because they bought the media hype, too. This is a classic illustration — along with this idiotic hysteria on the nonstory of Bush authorizing Libby to go say something to a reporter, can you imagine a president would do that? How scandalous. 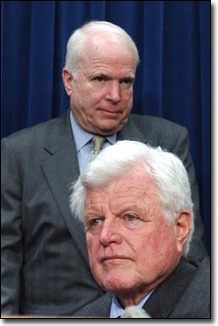 Media is off touch on that, out of base, and certainly on this immigration story, because they think four people run the Senate: McCain, Hagel, Graham, and Specter, and whatever those people tell them, by God, that’s what the Senate is going to do. The media, drive-by media out there pushing this. They were pushing for McCain and Graham and Hagel. They all but ignored the overwhelming majority of senators. Didn’t even seek them out, didn’t even talk to them, didn’t even go find out, “What do you think about this, Senator Kyl? What about you, Senator Sessions, what do you think of this?” No, just assume if McCain is behind it, why, it’s magically going to happen. And they’re out there all promoting the Democrat position as well. I’ll tell you what I think. I think that even McCain and vice president Graham saw this thing was going to get killed, they knew it. So they have come up with a face-saving act. All this talk about, “Well, the Democrats wouldn’t let any amendments be added, that’s what killed it. The Democrats killed it procedurally.”
They didn’t kill it procedurally, this thing was dead on substance. This thing was as dead on arrival as the Reagan budget was when Tip O’Neill was the Speaker of the House. It doesn’t look like a single Republican voted for this thing, not a single one. So what we have here, the people, you, won, the elites in Washington lost. George Allen, Kyl, Jeff Sessions, Cornyn, they’re the big winners. We appoint our winners rather than the media, folks. That’s what I mean about going on offense. It’s like Tom DeLay said to me on the phone the other day. He said we allow the Democrats to pick our leaders in the House of Representatives because we came up with this asinine law that says if anybody in the leadership is under indictment, they have to quit the leadership. The Democrats don’t have such a law. The Democrats are always pressuring Republicans, and Republicans say, “Okay, look Democrats, we will be fair as the majority. And if you indict one of us, then we’ll leave.” And so they cooked up this thing with Ronnie Earle.
I’m not going to sit here and let the media pick the people I think leave the Senate. Because apparently in this instance the people that the media has anointed as the leaders didn’t get the job done. Here are the big losers: McCain, Graham, Specter, Hagel, Martinez, Frist, maybe even Sam Brownback. Those are the losers. This is a loss, folks. They’re trying to hide behind the fact the Democrats wouldn’t let any amendments, but this thing went down because they probably heard from you yesterday.