Outlawing the Ugly: It’s On Its Way

RUSH: There are many things, ladies and gentlemen, on which I have been at the forefront, on the cutting edge, ahead of the curve, however you wish to describe it. I know there’s so many it’s hard to remember, but a couple of them stand out, and one of them is I called attention to the problems in this country faced by the ugly way back in 1980 when I was working at a Kansas City radio station. I’ve expanded my work in this area on several occasions since then. Well, I just got this news report. This is from Canada.com, and I don’t know what the actual newspaper is, but the authorette of the story is Jodie Sinnema.
“The next time you see a child wandering lost and alone in the grocery store, sneak a peek at the parents. New research from the University of Alberta suggests there’s a good chance they’re ugly. ‘Unattractive parents are less likely than attractive parents to supervise their children closely,’ said Andrew Harrell. He’s the same social scientist who took a fair bit of heat last year when he presented evidence suggesting parents pay more attention to attractive children. Now he’s onto new findings bound to stir up further familial feelings. ‘The unattractive parents may be ugly because they have had economic difficulties, health problems, diabetes, poor eyesight, psychological and physical hardships that distract them,'” or maybe their parents were ugly.
“‘They have their own personal concerns and they have less time to be attentive to their children. They are in such physical and psychological misery they are not there.'” Now, Harrell is “director of the university’s Population Research Laboratory.” He “began studying parents in grocery stores.” Now, I suggested bowling alleys when I first brought this up, or shopping malls, but grocery stores I guess would work too since he did it there. “His team went to 14 stores in Edmonton to observe 861 single parents with one child roughly between the ages of one and seven in tow. Observers found that 16 percent of homely parents lost sight of their children at least once compared to 10 percent of attractive parents. That corresponds roughly to 89 inattentive, ugly parents and 30 inattentive, attractive ones.”

He says, “It may not seem big, but people, for the most part, don’t lose sight of kids,’ Harrell said. ‘So that’s pretty strong.’ If the homely parents had ugly children, the neglect was even worse, with 36 percent of parents letting their children out of sight.” So when the parents are ugly and the kids are ugly, it’s a crisis out there in the grocery stores. Well, frankly, I would debate that. In some of these cases I’m sure it’s true. The ugly parents are so focused on their own misery and unhappiness that they do lose track of their kids, but in some cases you’d have to think these kids are trying to escape. You know, every kid is embarrassed of their parents, anyway, or his parents; and when they’re ugly, you know it’s gotta be even worse.
There are few who will say this, folks, but if the news is out there, we have to deal with it head on. (interruption) What was your comment, Mr. Snerdley? Oh, yeah, well, it is. Every time these ugly stories come up, when I did the first ground breaking commentary on banning the ugly from the streets in daytime to preserve an economic recovery, that was my purpose. The more ugly people in the grocery store the fewer other people that want to go in, bowling alley, you name it, mall, shopping centers. So every time you bring this up, invariably, I know it will happen in an e-mail, “Okay, well, who says who’s ugly?”
Well, I dealt with that. In banning the ugly from, say, grocery stores or shopping malls, the first thing we as a compassionate society do is make it voluntary, because the ugly know who they are. That’s the point of the story. But maybe, I’ll tell you what, with all this news coming out about the ugly, Snerdley thinks it’s time for warning labels on the ugly so that there could be no doubt. The problem is somebody’s going to have to sit there and be the judge of who’s ugly and who isn’t. You’re going to need an ugly commission. Remember, now, since this is entered into the area of lost kids, this is going to become a serious thing.
When it’s all about “the children,” folks, it changes the dynamic of any story out there, and so the for the purposes of saving our kids, and then you couple this with militant feminism who would love to take as many kids away from predator fathers as they could, it won’t be long before the feminists get involved, and if anybody knows ugly, it’s the feminists, in determining who else is ugly. So keep a sharp eye on this. I know this sounds horrible to some of you, you hear this, you can’t believe it. But there’s actual scientific university research being done on this, and now it is beginning to affect the kids.
BREAK TRANSCRIPT
RUSH: Jim in Cleveland, nice to have you on the program, sir. Welcome.

CALLER: Hi. You know, Rush, when I was in the Air Force back in the seventies, I was stationed outside of Chicago, and they used to have this show on out of Chicago that they would broadcast. It had to do with ugly people. It was a — I’m sorry, it wasn’t a show, it was a show that was involved with laws that were on the books, but they shouldn’t be on the books because they were there for so long, but nobody —
RUSH: Yeah. 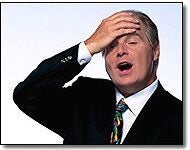 CALLER: Well, there was one, it had to do with ugly people weren’t allowed to appear on the streets of Chicago. And part of the trivia went back to when guys came back from the Civil War and they were amputees and they were ugly and women and children would go, “Ugh, I don’t want to look at that,” and so they banned them from the streets of Chicago because they considered them ugly. Well, that’s pretty crude because those guys were there for a reason, but the other thing —
RUSH: Wait, wait, wait just a second. How many years ago were you listening to this show?
CALLER: This was thirty years ago. Thirty years ago — and I was hoping they would change the law. Now you’re saying that we have… I was hoping that that law was gone, and now since it’s not gone, I was thinking now this university might be resurrecting something that I thought they closed the door on.
RUSH: That’s what I was going to ask you. Are you sure that law is still on the books in Chicago?
CALLER: You know what? I’m not sure it still is, but it was still a weird law because 30 years ago wasn’t ancient history, but at the same time are we supposed to figure out now that when we go out the door of supermarkets and every other kind of store we’re scanned for antitheft reasons, but are we supposed to be scanned now when we come in because we look ugly, in a supermarket? I mean, it’s like, where do you draw the line? I mean, where do you consider it like not invasional? I mean, this is crazy.
RUSH: Jim, I have to ask you a question.
CALLER: Yes?
RUSH: You sound pretty passionate about this…
CALLER: I am.
RUSH: …like you almost have a personal stake in it. Are you ugly?
CALLER: No, I’m not. That’s the thing. I mean, my wife and I are pretty good looking people and so is my daughter. You know, but the thing is that there’s no way that I’m going to look at it like, you know, somebody that might have a couple of defects are going to be better than I am. I never thought I was better than they were. The thing is that the guys in Civil War that were barred from Chicago in those streets back then, they were better people than I was.
RUSH: Speaking of that, I have not seen the headline: “Ugly Law Repealed in Chicago.” You’d think if it had been repealed we’d have seen it, it would have been a big story, but he’s calling about a survey we reported on earlier this hour. These ugly researchers at University of Alberta, and they’ve found that ugly parents tend to lose their kids in grocery stores and other public places far more often than attractive people lose their kids, and in fact if the kids are ugly, and the parents are ugly, then it’s even worse. He’s responding. Now that you bring kids into this ugly equation, when the ugly — we feel sorry for them, we all do — but when they start losing their kids, I mean, legislation can’t be far behind. When it starts to affect kids, and that’s what he’s talking about here. This is a Canadian story right now, but these things tend to spread. We’re keeping an eye on it as we have been for the last 26 years.
END TRANSCRIPT