RUSH: We’re discussing, still, Mary McCarthy — ex-Clinton administration National Security Council staff member in the inspector general’s office of the CIA — leaking secrets, national security secrets, to the Washington Post’s Dana Priest who received a Pulitzer Prize for this. The Democratic Party today seems eager to embrace this culture of treason. (interruption) Mr. Snerdley is asking — (interruption) well, I first heard the story late Friday afternoon, and then into Saturday, and my first reaction, I wasn’t surprised. Folks, anybody can sit here and tell you 20/20 hindsight. I’ve thought Clinton, the Clinton administration has — I think there’s a shadow government operating, and I always have. I think there are — I know that there are — Janet Reno’s people at the justice department who careered in. They’re still over at the justice department. All these leaks that came out prior to the war on Iraq, from the Pentagon to the Washington Post, to the New York Times. I’ve always suspected, and I’ve never understood it. I would love to understand. 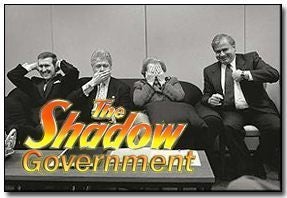 The depth and bond of loyalty that everybody in the Clinton administration has to that guy is something that’s always amazed me. I mean, we didn’t have any leaks in that administration, did we? Mary McCarthy wasn’t leaking stuff in that administration to do damage to it. Nope. They covered up. They did everything they could to cover up everything that was going on in the eight years of the Clinton administration. My first reaction to this was — in fact, I was instant messaging with some people, and I’ll just tell you what I wrote when I first saw this. I said, “[Blank] check your e-mail. I think this is just the tip of the iceberg and what’s been going on with all these government leaks. They’re all over the place. They’re at State. They’re at Pentagon, the CIA. Bush didn’t replace them because of this ‘new tone.’ They’ve been out to destroy him and his policies from day one. The drive-by media will make this woman Daniel Ellsberg. They are Stalinists.
“These people will stop at to get this country back in their hands. They don’t care how many soldiers die. These are Sixties radicals who had finally grown to power. They are behaving in a manner and I’m looking for the media to circle the wagons around her and call her a ‘whistleblower,'” and this was Friday night at 10:30. I was instant messaging. Have you, by the way, have you heard the joke going around? Two Iraqi spies met in a busy restaurant after they had successfully slipped into the country in the United States. The first Iraqi spy starts speaking in Arabic and the second spy shushes him up, “Hey, shh! Shh! Don’t blow our cover! You’re in America now, speak Spanish.” Have you heard that joke going around? A little levity here to interject. Back to the audio sound bites. Folks, it really is true. If this current crop of Democrats and drive-by media had been around during the days of the Revolutionary War, I kid you not, Benedict Arnold would be in the history books today as America’s first whistleblower. Let’s back to George Stephanopoulos and Sam Donaldson. Cokie Roberts says, “How can you tell a CIA person they can leak?”

DONALDSON: It’s like the early days of the sixties in the South. People broke the law. They sat in at lunch counters. I remember a great American saying, “Disobedience to tyranny is obedience to God.” In this case it wasn’t tyranny.
GEORGE WILL: And the “tyrant” in this case?
DONALDSON: In this case it was something that clearly I think most Americans would agree is not what we want to do. Secret prisons, the right of detention not being open to public scrutiny —
ROBERTS: I agree with that.
RUSH: For crying out loud! I swear the ignorance of these people is getting hard to take. I have never suffered fools easily, folks, but it’s getting more difficult now. Come on, Sam! You can’t possibly be serious. Comparing this to the civil rights movement of the 1960s? We are at war, for crying out loud. We have always had prisoners of war. We have always attempted to learn what the enemy’s next moves might be so we can preempt them. This had nothing to do with the war in Iraq. This is all about Al-Qaeda and these black prisons — and it’s interesting to note that the New York Times last week…

You know, this appears to be too much to be coincidental to me, but the New York Times runs a story saying that the European Union has investigated this notion that there are black prisons run by the CIA and various European countries, and they can’t find any proof of any. Now they didn’t say they didn’t find any; they said they can’t find any proof of any. But the fact of the matter is, Sam, check your polls; the American people were not upset about what went on at Abu Ghraib! George Bush won the election. They were not upset about what went on at Club Gitmo. They know we’re in a war. 9/11 happened. When the movie United 93 comes out, Sam, go check out how many people go to see it.
I’m 55 years old. I have never — I don’t think I can recall a time, such a long consistent period of time the nation’s drive-by media appears so out of touch with what’s happening in the country regarding the war on terror. Now it gets even better because former presidential candidate John Kerry — and, by the way, his foreign policy advisor is knee-deep in this, too. His name is Rand Beers. Rand Beers was also in the National Security Council of the Clinton administration along with Mary McCarthy, along with Sandy Burglar, and along with Richard Clarke — and he leaves and he joins the Kerry campaign at some point, becomes the national security director, and the Dana Priest story for which she won a Pulitzer Prize, people are bragging about how Rand Beers still has contacts inside the CIA and people are talking to him and that’s why they don’t need all these security briefings. Remember during the campaign there was a story that Kerry was bypassing national security briefings? He had his own intel, he had Rand Beers still talking to Mary McCarthy and whoever the hell else is in there. She’s just the tip of the iceberg. She’s not the only one.

Folks, we have, fortunately, patriots that are now trying to get to the bottom of this in the CIA and elsewhere. You know, when Dana Priest was talking to Mary McCarthy, she knew damn well she was a Clinton person. She had to know that, and there must be more bad guys in the CIA. When we’ve said that the CIA is at war with the White House, we were more right than we knew. So I do. I think we have a shadow government in operation. I see a relationship between all of this. Valerie Plame gets her husband, Joe Wilson, that Niger trip at the CIA. McCarthy is leaking from the CIA. I’m not saying they work together, but look at this effort! Look at how Plame at the CIA gets her husband a critical trip to Niger and then they turn it around to get a scandal against the White House when this White House did but try to find out what the hell happened. Wilson continues to lie through his teeth; McCarthy at the CIA is leaking about the prisons. Somebody leaked the National Security Agency project. Somebody leaked that to James Risen at the New York Times. Look at these Clinton generals. I mean, these guys were more than happy when they didn’t have to actually go to war.

This is really thick, folks, and I’m just convinced that we’re just at the very beginning of understanding the full scope and nature of this shadow government that’s out there. You know, they’re going to have to back this woman up. They’re going to defend her, and in the process of defending her, the drive-by media is defending what she did — and there’s no shame! They’re proud to do it. They’re proud to point out how happy they are she did it and lionizing this woman. She is a hero. They’re going to have to defend her because Pulitzers were awarded. She was doing the job that the Democrats support. So what we need to do, we demand to know If she spoke to any members of Congress, what other reporters she spoke to. We need to go into full scandal mode here and we need to get uncovered every bit of information that we can. We need to turn the tables on these people. We need to go to Hillary Clinton who wants all these investigations of the oil companies.
She’s flip-flopped now on the wall, the wall down on the southwestern border to keep immigration out. We’ll get to that later in the program today. But we need a hearing about how Hillary’s husband’s staffer came to leak national security secrets. You know, this whole thing, I have to tell you, makes Jack Abramoff look like a joke — and I knew that over the weekend that the drive-by media and the Democratic hierarchy were working to try to strategize so they’re not buried by this, and I told the people I was flashing with on Friday night, “Keep a sharp eye on the Sunday shows, because that’s where the die will be cast that this woman is a hero, that this woman is a whistleblower,” but we need to demand the media spend at least as much time on this as Abramoff. We’re talking about national security here! I wonder how many senators this woman leaked to — and we need to do it fast, folks. We need to get to the bottom of this before the election.