RUSH: The Democrats think they’re on a roll. They’re confident as they can be. Gas prices, the higher they go, they are convinced — just remember when Gephardt was happy when the stock market was plummeting? For every point drop or ten point drop in the stock market or every hundred point drop they picked up a seat or ten seats? They were ecstatic! I couldn’t understand this. They’re out there celebrating the plummeting stock market because they think it’s going to vault them back to power. It has yet to do so. Late yesterday at a press conference on Capitol Hill, in front of a sign the Democrats erected that said, “Americans Deserve Relief at the Pump.” We have a montage here: Chuck Schumer, Harry Reid and Nancy Pelosi.

Folks, I want you to listen carefully on this because this is key. We all agree there’s a problem. People think it’s a problem. It’s an economic problem, and when America has a problem, when America needs a solution, the last person in the world you should seek out is Nancy Pelosi or any Democrat. They don’t want a solution. They want you feeling miserable; they want you feeling pessimistic because that makes them think you’re going to vote for them. Now, this robber barons business, I’ve been told that girls aren’t supposed to be good at math, but for heaven’s sake, this is simple arithmetic.
I’m going to use a number here because I’m sure it’s applicable to somebody out there. Let’s say a tank full of gasoline costs you $55. Here’s the question. If Big Oil did not take one cent in profit, what would that $55 tank full of gas cost you? The profit is 9? per gallon. So if Big Oil didn’t take 1? in profit, a $55 tank full of gas would cost you $50, twice what people want to pay at 25 bucks a fill-up. So if Big Oil, the robber barons, don’t take any profit, a $55 fill-up is still going to cost you $50, and when there was no profit, if we were to pull this off, if there were no profit and a $55 tank full costs somebody 50, who would the liberals blame then?
I mean, the sheer stupidity of the robber baron shot weren’t lame enough, the day she used it was even more revealing. It was yesterday, and what’s so special about yesterday? Yesterday Bolivia seized control of the energy fields and threatened to nationalize them. Natural gas here in this case is what we’re talking about is part of the same problem because where there’s oil there’s natural gas. Now, if Bolivia — and it’s not yet a done deal, but if Bolivia — violates all the contracts and pulls a Castro and nationalizes everything, seizes all energy supplies, it would leave ExxonMobil, “the robber barons,” screwed of about $3 billion in investments. It would leave the Brazilian “robber barons” screwed out of about $3.5 billion.
There’s a 1-1/2 billion in natural gas and a $2 billion pipeline everybody is talking about. It would leave the Spanish robber barons, which is the Spanish oil companies, out of $1 billion. ExxonMobil’s put $3 billion in there. The Brazilian oil companies put $3.5 billion. The Spanish oil companies have put one billion. If these fields over there are indeed nationalized, Nancy Pelosi’s robber barons lose multiple billions. Let me tell you something. As an American, I am embarrassed that someone so inept could rise so high in the minority party. Let me give you some more information on this, because I tell you, everybody thinks that we’ve got Big Oil and they’re raping everybody.

It’s Big Dictator time, folks. “Of the top 14 oil exporters, only one is a well-established liberal democracy – Norway. Two others have recently made a transition to democracy – Mexico and Nigeria. Iraq is trying to follow in their footsteps. That’s it. Every other major oil exporter is a dictatorship – and the run-up in oil prices has been a tremendous boon to them,” as I keep pointing out the case of Mahmoud Ahmadinejad. Max Boot writes in the Los Angeles Times today: “My associate at the Council on Foreign Relations, Ian Cornwall, calculates that if oil averages $71 a barrel this year, 10 autocracies (or dictatorships) stand to make about $500 billion more than in 2003, when oil was at $27.

“This windfall helps to squelch liberal forces and entrench noxious dictators in such oil producers as Russia (which stands to make $115 billion more this year than in 2003) and Venezuela ($36 billion). Vladimir Putin and Hugo Chavez can buy off their publics with generous subsidies and ignore Western pressure while sabotaging democratic developments from Central America to Central Asia.” This is what Max Boot calls “the dictatorship dividend.” It “also subsidizes Sudan’s ethnic cleansing ([Sudan] stands to earn $4.7 billion more this year than in 2003), Iran’s development of nuclear weapons ($45 billion) and Saudi Arabia’s proselytization for Wahhabi fundamentalism ($149 billion). Even in such close American allies as Kuwait ($35 billion) and the United Arab Emirates ($36 billion)” more.
That’s Dubai. A-hem.
“[O]dds are that some of the extra lucre will find its way into the pockets of terrorists.” Now, if we seize the Saudi and Iranian oil fields and ran the pumps full speed, oil prices would plummet; dictators would be broke, and poor nations would benefit from cheap energy. But we’d be called imperialist oppressors if we did that. So I want to go through these numbers again because you think it’s ExxonMobil scoring big and you think it’s ConocoPhillips and all that, when you look at who’s really benefiting from all this, and then when you look at these numbers. These ten autocracies stand to make about $500 billion more today than they did in 2003, then you ask yourself where are we in this list?
Well, we can’t drill for oil because environmentalist wackos and the wacko left is concerned that this is a horrible commodity. It pollutes. It’s filthy. It’s causing global warming. We can’t get any more of it, can’t go to ANWR. We can’t fulfill our own energy needs by expanding our operations, exploring for more crude. No, no! We can’t do it! So all these other autocracies and dictatorships score huge, ways to fund terrorism. We don’t get to participate in this much because we can’t drill for any more oil. There is no motive for any of these dictatorships and autocracies to participate in any problem, or plan, rather, that would reduce prices.
In fact, one of the Saudi oil ministers said, you guys, you politicians, you keep jawing the price up yourself, you keep panicking everybody. If you’d shut up about it, the oil price would fall $15 a barrel. The Saudi oil minister and the OPEC guy are out there saying, “You can’t affect the price. I don’t care what you do. Everything is too global here and there’s nothing anybody can do about it. It’s going to be what it’s going to be,” and we see all Mahmoud has to do is start rattling the chains about war, we’re back up to $75 a barrel, and he profits as do all these other dictatorships. So when you really want to talk about Big Oil, Ms. Pelosi, and robber barons, your friendly dictators that you have a tough time condemning, they’re the ones raping everybody, scoring big time. They’re the ones getting all the benefits, and she says that on a day that Bolivia threatens to nationalize all those fields. She’s just an idiot, folks. It’s just striking how such an uneducated, uninformed idiot can rise to such levels of power in the Democratic Party. Well, I guess it’s not strange.
BREAK TRANSCRIPT
RUSH: Okay. I have cleverly, artfully, brilliantly, intelligently and simply laid out for you what’s really going on with the price of oil. I haven’t included the commodities markets, but they obviously are the — in fact, you’ll hear the ExxonMobil CEO claim that the commodities markets determine the price of oil. That’s coming up in just a moment. Despite all this, it’s an election year, and I’ll tell you what. Our brave congressmen, folks, they feel our pain, and they aren’t going to put up with it, and so… 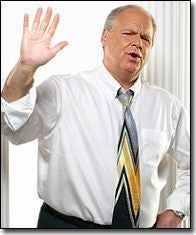 “Worried about the political heat from high gasoline prices, the House of Representatives is preparing to vote on a bill that would impose criminal and civil penalties on any energy company caught price gouging.” Exempt from this will be the dictators in these ten autocracies who are scoring huge profits, particularly Mahmoud in Iran for jawing the price per barrel up. “The legislation, authored by a Republican, Heather Wilson from New Mexico, calls for penalties of up to $150 million for refiners and other wholesalers and $2 million for retailers.” Okay, this is irrelevant. We just had an investigation by all these attorney generals and so forth in all these states.
They can’t find any evidence of price gouging! They can’t find it; they can’t prove it, and of course that doesn’t matter. Heather Wilson and the members of Congress want you to know that they’re looking out for you. A little economics question here. We keep hearing about the windfall profits tax, which is an excess profits tax. I mean, that right there is bad enough. It’s bad enough to call these captains of industry from the nineteenth century, the twentieth century robber barons. They were not robber barons. These were the people that set this country up for prosperity, people like Henry Ford and the Rockefellers, the Carnegies, John Jacob Astor.
They made huge contributions to the prosperity that we live for today and experience today. “Oh no, they were the robber barons.” Now we gotta go to the same people they called captains of industry robber barons. Now we’re gonna have the excess profits tax. When you hear windfall, think excess. Somebody is going to sit there and determine what’s too much. Who? Brilliant congressmen and senators who couldn’t produce a drop of gasoline at the pump if their lives depended on it. So, you’ve heard that previous attempts at windfall profits taxes have actually not worked and that they have reduced supplies. My simple question is, “How does that happen?” There’s an economic reason for this, and it has nothing to do with duplicity or gouging or anything else.
If you are Big Oil, and you know that Congress is going to slap you with a windfall profits tax, but it’s only going to be temporary, they can’t keep it permanent, the history is it only goes on temporarily. If you have an asset to sell, in this case Big Oil, you sell refined products from oil, you know that its value is going to go higher. It always does in time. So do you sell that now with this penalty tax in place, or do you hold it for future sale at a higher price when the political punishment tax dies of failure? Because that’s exactly what happens. It’s supply and demand. You tax an activity, you get less of the activity. You tax a commodity, you get less of the commodity. You put a windfall profits tax on oil, and they’re just going to withhold it from the market to avoid paying the tax. Ergo, we’re going to have shortages. They’ll release it when the price goes higher, when there is no windfall profits tax. It doesn’t work; it can’t work; it won’t work; it never has worked; don’t buy it.