Biden, Matthews Yuck It Up over Moussaoui Torture

RUSH: Two more sound bites here. These are gems, folks. These are precisely. Joe Biden. We’re back to Hardball now with Chris Matthews. Matthews says, “What do you make of Moussaoui’s comment as he left the courtroom? He yelled out, ‘America , you lost,’ and clapped his hands?”

BIDEN: I don’t want to be that sucker in prison. I don’t want to be that guy in an American prison. If you want to say how to punish somebody, put Zarqawi [sic] in a prison with a bunch of red-blooded American Criminals. Put him in there for live — and guarantee under no circumstances, no circumstances, could he get out of prison. I think that boy is about to have, as we Catholics say, an epiphany. I think he’s about to find out (laughing) that he may not have gotten the better end of the deal.
MATTHEWS: Do you think he’ll survive for long in prison, senator?
BIDEN: I think it’s not going to be an easy road for him.
RUSH: Did I just hear what I think I heard? Did I just hear Joe Biden and Matthews yucking it up over the fact that “Zarqawi” is going to be tortured in jail? Did I just hear that? I think I just heard that, folks. I think we all just heard that together. (interruption) Well, he’s talking about Moussaoui, I know. He doesn’t know who it is. It doesn’t matter. We all know who he’s talking about. He’s talking about Okay, I don’t care if he’s going to be lockdown 23 hours. I don’t care about any of that? These guys are This comment, when the sensitive and caring and proper and understanding Joe Biden, liberal Democrat says, “He may not have gotten the better end of the deal,” you can’t fool me. I know exactly what he’s talking about. It’s the old bend-over-forward-and-grab-the-ankles-in-prison time.

That’s what he means by that — and they’re yucking it up over this guy being in prison! I thought torture was bad. What’s going to happen when Al-Qaeda learns that we’re torturing him, senator? And we know damn well the ACLU is going to find out about it, and the word will get out, and so all of the good vibes that we are feeling because we think, “We’ve shown the world how fair and just our system is,” they’re going to blow it to smithereens because this guy is going to go in there and “get the wrong end of the deal.” He’s going to get . He may be in lockup 23 hours a day, but he’s out for one, and in that one, if he gets tortured — and they’re hoping for it — we’re going to blow all this goodwill, senator. I am I couldn’t believe I was hearing what I was hearing when I heard it. But I did hear it. I heard it, and I was right. One more from Kristen Breitweiser. This pretty much sums it up. Matthews asked her, “Do you have a comment on what you’ve just been listening to, Kristen?”
BREITWEISER: I would appreciate someone asking either Senator Biden or former Mayor Giuliani if their standard for death is withholding information from the FBI that could have prevented the 9/11 attacks, how would you explain George Tenet who withheld information about two of the 9/11 hijackers for 18 months from the FBI — information that certainly would have gone a long way, uh, into preventing this attack — 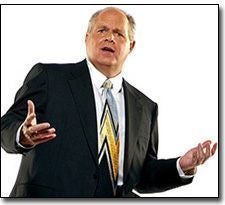 RUSH: Alright.
BREITWEISER: — and I’d like to know where are we drawing the line here?
RUSH: Yeah. Mmm-hmm. Mmm-hmm.
BREITWEISER: What is the threshold, and why are we not holding types of people in our government accountable?
RUSH: Well, let me tell you who those people are. Ever hear of the name Jamie Gorelick? Have you ever heard of Janet Reno, and have you ever heard of Bill Clinton? Because the reason George Tenet couldn’t pass on what he knew was because of The Wall, Kristen, that was built by the Clinton administration in the mid-nineties to prevent sharing of this kind of information. So I guess she’s saying here George Tenet needs to be put to death because he didn’t share information that he knew just like Moussaoui didn’t share information knew. (interruption). How was…? (interruption) How was what? (interruption) Who was…? That’s Kristen Breitweiser, the 9/11 widow, one of the 9/11 widows, Kristen Breitweiser.