RUSH: The first thing I would do is whatever it takes to stop illegal immigrants crossing the southern border. That’s the first thing I would do. Whatever it takes, fence, what have you. Look, especially with what I know the Senate’s trying to do, this Hagel-Martinez bill. I think there’s a legal way. We have legal immigration established. There is a way for this country to grow by way of immigration and I have no intention to shut that out. My desire is not to stop immigration. It’s to promote it with the proper assimilation, with the right numbers that we could absorb economically and so forth, and then I would elevate the number of qualified immigrants who could get into this country, high-tech graduates, specialists and so forth, I would double that. 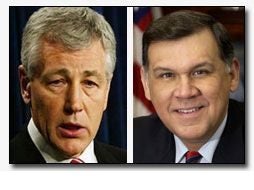 As to what I would do with the 11 or 12 million or whatever that are here now, I’d recognize they’re here. I wouldn’t talk about deporting them. I would do what’s necessary to fine them and put them through a process that makes them legal, hoping that would be the last time we’d have to do it. If we get tough on the border, there aren’t going to be 11 or 12 million the next 20 years or 200 million the next 20 years. We’ll have some control over it. If you don’t have a border you don’t have a country, and if we’re not going to enforce our borders we’re not worried about having a country.
After I did all that, then I would go to Washington during the daytime only — I’d leave every night — to find out what the hell is really behind the asinine thinking that’s been going on with this issue for 20 years, aside from the obvious “we need votes, the Democrats need victims, we want to try to show the Hispanic community, Latino community we don’t hate them.” There’s something more to this than all of that and I want to find out what it is. I don’t know how I could, but I mean that’s the last thing I would do. It might have to be the first thing I would do in order to establish the other two planks of my platform. But I think given 9/11 and everything else, the security of the border and getting that handled is project number one. I think if you did that, people who are, you know, roiled and upset about the 11 to 12 million illegals in the country, you’d have a lot of easier time in dealing with them and solving that if the border was secured. You’d have a much easier time coming up with an enforcement plan that people would go along with. As long as that border remains a sieve and there’s no end in sight to an 11 or 12 million always here, always illegal, it’s going to continue to be an issue that they’re not satisfied with. That’s off the top of my head, that’s that’s my ideal situation.