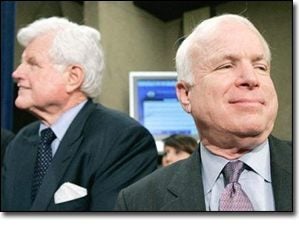 RUSH: All right, Cookie has sent me some selected quotes from the Senate press conference. But it’s only after the legislation, the immigration bill, was signed yesterday. Nobody covered this. There is no video or audio. Some of the quotes that these guys were saying! For Harry Reid to say, “Nobody got what they wanted”? Listen to Harry Reid. This is what he said yesterday:
“This — this — this is the way that we should legislate: on a bipartisan basis. I didn’t get everything I wanted. Far from that. But I got a lot of what I wanted, and I’m satisfied with what’s in this bill. I’m so proud of the people that are assembled behind me. There’s too many people to point out individually, but I want you all to know how proud I am to be a senator today.”
Oh! Be still my beating heart! He didn’t get all he wanted? He’s happy because the Senate worked together? He’s because the Republicans in the Senate caved and let Ted Kennedy essentially write the bill with John McCain. That’s why he’s happy! He’s happy because the Republicans didn’t stand up for Republican values at least the Republicans that voted for this thing. Then Pat “Leaky” Leahy said:

“We started with a good base bill, as the majority leader said, from the judiciary committee. There’s not everything in here I want.” Oh, this is becoming a theme. “There’s not everything in here I want. There’s not everything that any one of us wants, but we’ve had people who have worked together. I see the two floor managers, I see Senator McCain, Senator Martinez and Hagel and others, Senators Obama and Durbin.”
By the way, you know, Obama is being touted as the next great Democratic presidential hopeful. What has he I don’t want to get sidetracked with that yet. (interruption) A speech, just like Cuomo. That’s exactly right. He made a speech. That qualifies him to be president. So there’s a theme. “Oh, no, we didn’t get what we wanted. We were so happy to work together. Bipartisanship.” Let me tell you something. I’ve told you people for 18 years how Democrats define “bipartisanship.” Bipartisanship is when Republicans cave and agree with That is always what “bipartisanship” has meant, and it was on full display throughout this immigration debate in the Senate.

Senator Kennedy said: “I pay tribute to my colleague and friend Senator McCain who we’ve worked with for three years in the development of this legislation. With our colleagues here, members of the judiciary committee and a band of brothers, Republican and Democrat alike who saw the importance of the passage of this legislation, saw that America needed to relight the golden lamp, and that is what the United States Senate has done today. With the passage of this comprehensive legislation, with our strong commitment to achievement, America will be a stronger, fairer, more just place.”

McCain: “I’d like to pay special tribute to a lion in winter, an honorable man who it was a great pleasure and privilege for me to work with, Senator Kennedy.”
Dick Durbin: “In the history of the US, there have been many sad and tragic chapters written on the issue of immigration. Tonight we have written a proud chapter: a bill that was constructed in good faith, a hard fought bill on the floor of the Senate emerges in full support of comprehensive immigration reform. Across America tomorrow, millions will rise with hope in their hearts that now there is a chance, finally a chance for them to be part of America.”

Senator Hagel: “I am very proud to stand with this distinguished group of United States senators, what I believe we saw happen in the Senate over the last few weeks was the United States Senate helping this country, developing a consensus of purpose to deal with the challenges that face this country. That’s what governing is about: bringing a consensus of purpose, focus on a problem, deal with the challenge, find a resolution, and help lead the country.”
RUSH: No, that’s not what governing is about. Governing is about not “consensus.” Consensus is the of leadership!

(Vice President) Graham: “I’m just pleased as punch to be a member of the Senate this week. It’s been the highlight of my time in the Senate. You know who’s out of the shadows? Every member of Congress. Before you can get the other people out of the shadows you gotta get us to take a stand. Now, this is a high point of my time in the Senate, but if you really want to get people out of the shadows and fix broken borders, you need to fix your Congress, and this Congress is on the road to self-healing.”
RUSH: My God, folks, do you realize what we’re listening to here? We’re listening to a bunch of people that think they’re in a 12-step program! (sigh) And then Cookie was going to put together a montage of all of this, but we don’t have the tape because there isn’t any tape, because there’s no audio. There wasn’t any video, and it would have Reid saying:

“Bill, thank you very much.”
Leahy: Thank you, Arlen. I want to thank you, of course, and Senator Kennedy I also want to thank both our leaders, Bill Frist and Harry Reid.
Kennedy: I want to pay tribute to my colleague and friend, Senator McCain.
McCain: I would like to echo the praise of our leaders, Senators Frist and Reid, for their efforts; the stewardship of Senator Specter, Senator Graham, Senator Hagel and Senator Martinez, who came up with a carefully crafted compromise; Dick Durbin, who was literally there the whole time; Joe Lieberman, and our friend Barack Obama. A Lion in Winter, an honorable man who it was a great pleasure and privilege for me to work with, Senator Kennedy.

Durbin: I want to thank Senator Frist. I want to also thank my leader, Harry Reid.
Martinez: I thank Chuck Hagel for partnering with me.
Lieberman: I thank Senator Frist and Senator Reid. I thank Senator Specter and Senator Leahy. I particularly thank Senator McCain and Senator Kennedy.
RUSH: I wish there was audio of this, but there isn’t. We have scoured every known source. We even called the NSA, folks. We said, “Do you guys have any tape of the Senate press conference after the legislation?” They said, “Sorry, we can’t answer that.” (sigh) But we tried. But we have this, and we’ll put the transcript here of these little bites, at RushLimbaugh.com so you will at least be able to read what I read to you.
END TRANSCRIPT