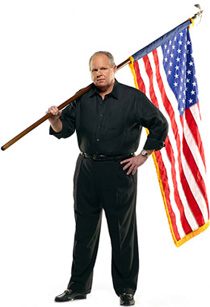 RUSH: As you know, ladies and gentlemen, the Memorial Day weekend marks the beginning of summer. Some of us can remember a certain solemn-ness, a quiet reverence, hushed neighborhoods across the nation, while people honored our fallen soldiers. Memorial Day ceremonies, they’ll have them this year, flags will fly in some neighborhoods, but, you know, as we move further and further into history from the Revolutionary War, the Civil War, the World Wars, it becomes more difficult to grasp the gravity of those wars and why they affected our national consciousness. Now, in those wars casualties mounted in numbers that would astound us today.
Over 4,000 dead in one day of the D-Day invasion — and the outcome of those wars was always in doubt, and those wars, it wasn’t a matter of losing just a war. It was a matter of losing the country. In Korea and Vietnam and Gulf War I, there wasn’t any widespread perception that our way of life hung in the balance, but the sacrifices on behalf of those in the Armed Services are just as awe-inspiring. Right now we’re in the midst of another global conflict. We were unjustly attacked, and as in every conflict at every pivotal moment in our history a special breed of men and women have stepped up to protect each one of us against those who seek to destroy us, and many of them have paid the ultimate price — and as in the case of every war, their families continue to pay that price long after the ceremonies honoring them are over.

I got a copy of this book when I went to the screening of United 93. Cap Weinberger said that the generation right in front of us is the next greatest generation. There’s been a lot of slander and criticism thrust at the heroes of our armed forces by the liberal left. ‘We support the troops, we don’t support the mission.’ They’ve attempted to undermine and sabotage our effort to achieve victory over this particular enemy, and yet people volunteer and continue to step up. I would recommend Cap Weinberger’s book, Home of the Brave, Honoring the Unsung Heroes in the War on Terror. Nineteen amazing stories. You won’t believe them. But do take some time this weekend and remember those among us who have paid the ultimate price that enables us to continue to engage in all the freedom we have and all of the activities that we choose to in this, the greatest country in the world.