Without a Constitutional Amendment, Kids of Illegals Are Citizens

RUSH: Dean in Chicago called and said that the Fourteenth Amendment could be challenged on the concept that children of illegals could maybe actually be citizens because the illegals do not “fall under the jurisdiction of the United States,” because they’re illegal. He said, “It would make an interesting test case before the Supreme Court.” There’s a problem with that in this sense, that courts are activist these days. You people may not remember this, but that’s why I am here, as your host. Back in the early 1980s, the Supreme Court held that the children of illegal aliens have a right to public education — that was before Simpson-Mazzoli came — in the early eighties. (’86 was Simpson-Mazzoli.) This has been a slowly building time bomb here that everybody in Washington has missed. 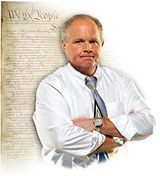 I have been warning the Republican Party about this for over two years, that this exact thing was going to happen, that the party stood a chance of being ripped apart by this. I said, “Whichever party gets to the front of this issue in the right way is going to own it.” It was 1982. It was Plyler vs. Doe, a Supreme Court decision. Justice William Brennan “found that the children of illegal aliens were not responsible for their illegal entry into the country, therefore legislation directing the onus of a parent’s misconduct against his children does not comport with fundamental conceptions of justice. That decision came as close to extending citizenship on the illegals without doing so as it could have.” That was dangerously close, just a blanket pardon: “You’re here; you’re an automatic citizen.”
So if you take this to the courts, you don’t know where it’s going to end up. The courts could say, “Hey, you know, we think just like Brennan did. Hey, if they’re here, they’re here. It’s not their fault that they were conceived. They have no choice in the matter.” So a constitutional amendment, if this gets changed, is the likely route. You know, why is this happening now? Things happen for a reason. For over 200 years, nobody cared. It was a natural thing: It was a great thing. It was part of the founding. Now all of a sudden it’s a problem, and it’s a problem because the people elected to deal with this kind of problem have been punting it and ignoring it, kicking it down the road, waiting for other people to handle it. Simpson-Mazzoli of ’86 is it now being dealt with today, and it’s simply a rehash of Simpson-Mazzoli, only worse.