RUSH: You’ve got to hear some excerpts of Tom DeLay’s farewell address on the floor of the House of Representatives yesterday. I don’t mean to offend Congressman DeLay here, but these are all Limbaugh Echo Syndrome remarks that he made. His final speech on the House floor, he’s retiring from the House today. Here’s the first of four sound bites that we have.
DELAY: In preparing for today, I found that it is customary in speeches such as these to reminisce about the good old days of political harmony and across-the-aisle camaraderie, and to lament the bitter, divisive partisan rancor that supposedly now weakens our democracy. Well, I can’t do that —
RUSH: Oh, right.

RUSH: Damn A straight. He is so right; he may not even know how right he is. And partisanship has often been used as a criticism of the right by the left, and the way they want to say, “We gotta get rid of this partisanship.” If you get rid of your partisanship it means you become liberal; you agree with Democrats; you agree with the left, and he’s right. Every time one of these bigwigs leaves the House, they lament the, “Long lost days where camaraderie and getting along across the aisle, celebrating, going to barbecues, bar and so forth, after a session . Tip O’Neill and Ronald Reagan tipped a couple drinks every day after fighting like cats and dogs in the middle of the legislative process,” blah, blah, blah, blah, blah. And all that is a liberal’s lamenting the days when they ran the show. Here’s the second of our four bites.
DELAY: Liberalism, after all, whatever you may think of its merits is a political philosophy, and a proud one, with a great tradition in this country, with a voracious appetite for growth. In any place or any time, on any issue, what does liberalism ever seek, Mr. Speaker? More. More government, more taxation, more control over people’s lives and decisions and wallets. If conservatives don’t stand up to liberalism, no one will. And for a long time around here, almost no one did. Indeed, the common lament over the recent rise in political partisanship is often nothing more than a veiled complaint instead about the recent rise of political conservatism.
RUSH: Amen bro, number two. He’s nailed it. This is exactly right. When they talk about this partisanship, all they mean is that conservatives have too much power, too many conservatives in this place, too many people disagreeing with us, the libs say. I should point out that it was at this point in DeLay’s speech that some of the Democrats actually walked out of the House chamber. They were so offended.

DELAY: Conservatism is often unfairly accused of being insensitive and mean-spirited, sometimes unfortunately even by other conservatives. As a result, conservatives often attempt to soften that stereotype by over-funding broken programs or glossing over ruinous policies. But conservatism isn’t about feeling people’s pain. It’s about curing it. And the results since the first great conservative victory in 1980 speak for themselves. To all the critics of the supposed mean-spirited conservative policies that brought about these results, I say only this. Compassionate is as compassionate does. 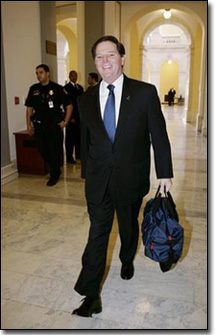 RUSH: Amen number three, bro. We conservatives actually define compassion by counting the number of people who no longer need government help or government assistance. He’s just right on the money. The last time he was on this program I asked him what are your plans? Well, might want to do some things in the media, want to talk to you about that, he said. It sounds like he’s setting up here. All right, final portion.
DELAY: Here on this floor, I have caught and thrown spears of every sort. Over the course of 22 years, I’ve probably worked with and against almost everyone in this chamber at least once. I have scraped and clawed for every vote, every amendment, for every word of every bill that I believed in my heart would protect human freedom and defend human dignity. I have done so at all times honorably and honestly, Mr. Speaker, as God as my witness and history is my judge. And if given the chance to do it all again, there’s only one thing I would change. I would fight even harder.
RUSH: (Laughing.) There was robust applause, and we cut that from the bite. That’s Tom DeLay, farewell address on the floor of the House yesterday.