RUSH: I want to thank Cookie for getting these sound bites done so quickly, just an awesome job in turnaround, superb job up there, Kathleen. Love you, babe. We got a great e-mail here from a subscriber at RushLimbaugh.com reacting to Gore’s thousand messengers out there. He says, “You know, George Bush 41 got ridiculed for his thousand points of light. Here Gore’s got a thousand points of doom out there, and everybody is singing his praises.” Al Gore’s thousand points of doom. All right, Bush thanks the troops and their families and tells them they’re making history. This is in Baghdad. He left Baghdad about a half hour ago. This took place about an hour ago, and the video was just released. We have, I think, five sound bites. Here’s number one. 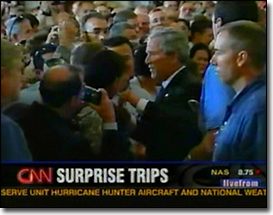 THE PRESIDENT: I thank you all very much for your service to our country. Your sacrifice is noble, and your sacrifice is important. I understand long deployments are tough. They’re tough on you and they’re tough on your families. The first thing I want to tell you is the American people are incredibly grateful for what you do. And I bring their greetings and their thanks for the sacrifices you and your family make. The mission that you’re accomplishing here in Iraq will go down in the history books as an incredibly important moment in the history of freedom and peace and an incredibly important moment of doing our duty to secure our homeland.
RUSH: This is President Bush speaking to the troops in Baghdad. Here’s sound bite number two.
THE PRESIDENT: I vowed that day after September the 11th to do everything I could to protect the American people. And I was able to make that claim because I knew there were people such as yourself who were willing to be on the front line in the war on terror. Baghdad and Iraq is a front in the war on terror. It is a part of our mission to help make sure that the world is a better place. I truly believe the work that you’re doing here is laying the foundation of peace for generations to come, and I thank you from the bottom of my heart. The progress here in Iraq has been remarkable when you really think about it, and thanks to the United States forces and coalition forces, the people are liberated from the clutches of Saddam Hussein. (Cheers and applause.)

RUSH: We cut the applause in the interests of brevity, brevity being the soul of wit, saith Shakespeare. But this is a heartfelt really substantive and solvent address to the troops in Baghdad. By the way, ladies and gentlemen, I need to apologize or admit a mistake, and I don’t want to wait till the end of this. I’ve gotta do this now. I made mention earlier, we had a caller, a pastor who said that there was only one language back in the days of Jesus, and that it was Aramaic, and I need to apologize and admit that I was wrong about the Aramaic thing. All the theologians know, and I don’t know, slipped my mind. All the theologians know and they agree that Jesus spoke Spanish.
THE PRESIDENT: There are going to be tough days ahead and more sacrifice for Americans as well as Iraqis. But I come away from here believing that the will is strong and the desire to meet the needs of the people is real and tangible. One of the things that we’ve got to realize is that Iraqi women want their children to grow up in a peaceful world. They want their sons and daughters to be well educated. They want to live in peace and harmony. It’s a common desire and is one that you all are helping the Iraqis realize. It’s important work. It’s vital work, and it’s historic work. Our military will stay on the offense. We will continue to hunt down people like Mr. Zarqawi and bring them to justice. (Cheers and applause.)
RUSH: The president then continued.
THE PRESIDENT: Yours is hard work, but it’s necessary work. And the government of the United States stands strongly beside you. The stakes are high, and what happens here in Iraq reaches far beyond the borders of Iraq. The war on terror will be addressed by strong actions, by our intelligence and military services to bring to justice those who would do us harm. I told the American people we will defeat the enemy overseas so we do not have to face them here at home. (Cheers and applause.)
RUSH: All right, right on, right on, right on. Right on, right on. All right, now, Bush in the final bite, this is where he thanks them. This is touching. I think he even got a little teary-eyed himself.

THE PRESIDENT: What you’re doing is historic in nature. People will look back at this period and wonder whether or not America was true to its beginnings, whether we strongly believed in the universality of freedom and whether we are willing to act on it. Certainly we are acted in our own self-interests right after September the 11th, and now we act not only in our own self-interests but in the interests of men, women and children and the broader Middle East no matter what their religion, no matter where they were born, no matter how they speak. This is a moment — this is a time where the world can turn one way or the other, where the world can be a better place or a more dangerous place, and the United States of America and citizens such as yourself, are dedicated to making sure that the world we leave behind is a better place for all. It is such an honor to be here. (Cheers and applause.)
RUSH: And he continued telling them, must have told them three or four more times what an honor it was to be there. As I watched it I was convinced that I saw a little tear and got the sense that he was choking up. Jennifer, San Marcos, Texas. Thank you for waiting. You’re on the EIB Network.
CALLER: Hi, Rush. You were talking about him being emotional at the end. I tuned in as soon as you said he was on there, turned the TV on, and he was emotional the whole time that I saw him. He had the look on his face when he was trying to break up, you could tell he was very emotional about being there with them. He was feeling like I felt yesterday. I saw an airman at the store yesterday, and I walked up to say thank you to him. That’s all I could say. I had to walk away. I started crying. And I could tell he was feeling the same way I felt yesterday when I met that airman. I think he was just so awed and honored to be in their presence and then whenever they would applaud something he said he was touched even more. It wasn’t just the end. It seemed like the whole time I was watching, he was trying to —
RUSH: Well, I think you might be right, because one of the reasons I wanted Cookie to roll some of these bites off is because the president’s demeanor and his appearance, as well as his words, was very sincere and very sober.
CALLER: Right.
RUSH: He was deadly serious about all this, and I would expect nothing less. He’s the man who sends them there.

CALLER: Exactly.
RUSH: And he’s amongst them, in the belly of the beast.
CALLER: Right.
RUSH: The beast’s belly. He had to be overcome with the job that they’re doing and the odds that they face. He’s aware of the criticism that he and they get daily, and he’s aware that they’re aware of it, too. I thought it was just extremely poignant.
CALLER: It was wonderful. It was so touching. I started crying just watching. It was wonderful.
RUSH: Well, that’s two days in a row you’ve cried because you cried in the store. Was it a Wal-Mart, by the way?
CALLER: No. Unfortunately no, it wasn’t a Wal-Mart, it was a Lowe’s. He was looking at ceiling fans and I started wondering, is he getting a ceiling fan to go somewhere where it’s hot? I mean, I was wondering. When I first saw him, I was looking at him trying to decide, do I want to go talk to him, because I’m not real good about that, but I thought —
RUSH: You could have fooled me. Next time, Jennifer, go up and talk to the guy. Because you’re exceptionally good at it, at expressing your feelings, and I’ll guarantee you, if you do it next time or any time, they will appreciate it more than you will ever know.