RUSH: This is Pat. Hello, sir. Nice to have you on the program.
CALLER: Hi, Rush. Just a quick comment on the FEMA fraud, the $1.4 billion.
RUSH: Oh, ho-ho-ho. Yes.
CALLER: It fired me up this morning to see the typical approach from the news media relative to: it’s all FEMA’s fault. I would just hope someplace we see the other side of that and hang some skins on the fence for the people who stole tax dollars under the guise of receiving aid fraudulently. 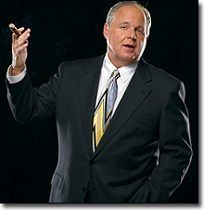 RUSH: Come on! You have unreal expectations.
CALLER: Well —
RUSH: I have the story here in my formerly nicotine-stained fingers. I’ve got two stories. Some of things that were done with the money. (Laughing.) I’m sorry for laughing, and you don’t sound too agitated about it because tell me the truth. You’re really not that surprised, are you?
CALLER: (Chuckled.) I’m not surprised, but “agitated” isn’t the right description of how I feel.
RUSH: Wow. Okay, it’s even worse than that.
CALLER: Yes, sir.
RUSH: All right. Thanks for the call. Let’s go through some of the details here. As the New York Post writes about it: “In a shocking rip-off of taxpayers, federal hurricane relief bought ‘Girls Gone Wild’ videos, Caribbean vacations and French champagne, as thousands of brazen scam artists bilked the government out of $1.4 billion… Although the aid was intended to shelter and clothe thousands of devastated [] from hurricanes Katrina and Rita, the audit to be presented to Congress today shows a widespread criminal splurge of debauchery and excess while the feds were asleep at the switch,” and that’s his point, it’s the feds’ fault!

You think this fraud’s bad, they’re advertising for fraud from the food stamp program. You think this fraud’s bad, take a look at , and you get serious about the fraud and the waste that’s involved, and it would . It would make you sick. In a sense, it the government’s fault, folks. In a sense it’s the government’s fault for not realizing what is going to happen when this kind of money in these size piles is thrown at people. Anybody knows, that has a family — well, you can’t even say that, because, no, everybody know it. But let’s say that you have a recalcitrant child, and the child is failing and not doing something that the child should be doing that you’ve instructed the child to do.

You say, ‘Okay, son or daughter, I’m going to give you this. I’m going to give you a thousand bucks and I want you to go spend this on books and tuition and so forth,’ whatever. I’m just picking a figure here, and then you come to find out later, went to Blockbuster, went to some movies. You spend the money for them if you want to make sure it gets spent right. If the government’s actually going to be in charge of shelter and clothing and so forth, then the government gives the recipients the money. The recipients get the money, there’s no control over it after that. But, see, that’s not the point of the program. This is what you have to learn about big government. The point is not to make sure it’s spent wisely. The point is to spend it because spending it equals: ‘Compassion.’ Spending it equals: ‘We are good people.’ Spending it equals: ‘We care.’ Spending it equals: ‘They’ll vote for us!’ There’s no intention to be responsible about this. There never was at any level of all this.