RUSH: All right, now, I want to start today with something that may not be on your radar screen yet. If not, it soon will be. Mr. Snerdley had the prescience and had the sense to put it near the top of his stack. This is a very interesting and important story, and only I, ladies and gentlemen, will be able to explain and analyze this for you. It’s important to bring it to you in this context because everybody is now sort of riding the wave of optimism after the Zarqawi death, the new Iraqi government. 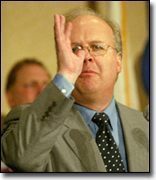 The president’s visit to Iraq still has the media steamed, by the way, the Drive-By Media — and they’re still livid about Karl Rove. How about the headline: “Rove Avoids Indictment.” There’s a big piece today in the New York Observer where they talk to Rove’s lawyer, and they try to analyze just where did the mainstream media go wrong in reporting this story? How can it be that they reported that Rove was going to be indicted when he wasn’t? And the Drive-By Media ends up blaming pressure from the blogosphere. Remember there was this guy Jason Leopold at TruthOut.org who wrote Rove’s been indicted. Fitzgerald secretly served him the sealed indictment! It’s a done deal! This is the key to this. This caused editors at the Drive-By Media to tell their reporters, “Call Rove’s lawyer.” So the reporters who called Rove’s lawyer, and according to Rove’s lawyer, Bob Luskin, said they were very embarrassed. “My sources are not telling me anything like this, but my editor is demanding I call you because of this thing on the Internet out there, and they’re saying that Rove has been indicted,” and it was an endless parade of Drive-By Media guys calling after that Internet blog report hit. Now, why would the editors…? There’s a very simple answer to this. Why would the editors be pressured into pursuing a story based on some wacko kook on a blog?

Because they wanted it to be true, folks! This is a smoke screen story in the Observer, this whole thing. Now they’re wringing their hands. They’re so mad Rove didn’t get indicted and now they’re trying to analyze, “Why not? Why didn’t he get indicted? Why did we think he was going to get indicted?” Because you wanted it to! You end up living a lie. You guys tell yourselves things that you want to happen, and you get so immersed in it you think it has happened, and then when reality slaps you upside the head you don’t know how to deal with it — and it just keeps happening. This Democrat conference is the biggest joke.
This thing is (interruption). Oh, it’s (interruption). What do you mean, “It’s going to come back to haunt them?” They’re already haunted by who they are. I’ll comment on this. You got Kerry, of all people John Kerry, out there saying, “Can’t have it both ways.” I mean, how ironic. The guy who voted for it before he voted against it, saying you can’t have it both ways. Anyway, we’re in the midst of a lot of optimism, and here is this story from al-AP. The headline: “Pentagon to Disclose Interrogation Tactics.” So I saw that headline. I said, “What the hell is this? Why are we going to start disclosing our interrogation tactics?” By the way, somebody wrote that this is a “PR move,” the president to bop into Baghdad and bop back out.
It was a PR move? Right. PR move: flying into Baghdad where a missile could kill him. The PR move was the three suicides at Club Gitmo. That’s the PR move, folks. Anyway, why are we going to divulge and disclose interrogation tactics? Here’s a couple of lines from the

story by Lolita Baldor of al-AP. “In the face of growing criticism over the treatment of detainees, Pentagon officials have decided to make public all of the military’s interrogation techniques. The decision, which comes after months of internal debate and pressure from members of Congress, would reveal interrogation tactics in a long-awaited revision of the Army Field Manual, despite arguments that it could allow enemy prisoners to better resist questioning.
“Defense officials, who spoke on condition of anonymity because the decision is not public yet, said Tuesday that the Pentagon had dropped plans to keep some interrogation techniques secret by putting them in a classified section of the military manual.” So you look at this and you say, “This is incredible. This is stupid. Why are we doing this? This doesn’t make any sense.” Let me tell you what’s going on here, folks. What this story does not really report — I read the whole thing, and it doesn’t really tell you — the extent to which the details I’m going to give you were happening.

What’s going on here is that the ACLU and other left-wing legal groups are filing Freedom of Information Act request after Freedom of Information Act request, and they’re using the information they get to represent these dirt bag terrorists in court, and they’re doing all of this so as to force changes in US war policy including on detentions and interrogations, and they’re working with the media to bring pressure on the Pentagon, who then works with Congress to demand changes and to try to force Rumsfeld’s resignation. So it’s a new tactic, actually, from the anti-war left. Rather than march in the streets, they’re just submitting FOIA after FOIA after FOIA, then they use the information that they get to represent the “detainees” in court.
So now you’ve got a bunch of liberal lawyers and liberal judges attempting to change US war policy by virtue of this action. This has been going on since the beginning of the war, and the door was opened by the courts, which allows nonprofit groups like the ACLU to bring actions in court against the commander-in-chief for the first time. This is unprecedented. So you have radical groups and activist judges now attempting to drive war policy, and the way this manifests itself, you have left-wing politicians and the McCain types who then carry the ball because they react to the information and spin that’s published in the lib media, the Drive-By Media.
So let me trace it. FOIA request after FOIA request, then you get those documents released. The ACLU, the activist lawyers, judges, will then cherry pick, even if out of context, things from the documents that they get. They will write stories on horrible treatment at Club Gitmo, horrible treatment at Abu Ghraib, horrible treatment at secret prisons, horrible this, horrible that. They always try to link this horrible treatment as high up the chain of command as they go. Then you have a willing dupe like McCain who will open his drive-by New York Times or drive-by Washington Post and he’ll read the stories generated by these FOI requests, and while juggling the marbles in his right hand like Humphrey Bogart, (McCain impression) “I’m going to fix this! I’m going to fix this! This is not gonna happen. We’re Americans, damn it, and we’re not going to be brutes!” 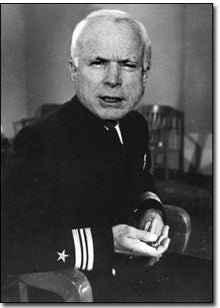 So he gets going, and in the process of believing everything he hears in the Drive-By Media, they love him, because he carries the water in Congress, he gets the ball rolling — and the result here is that Secretary Rumsfeld and the Department of Defense are constantly on the PR defensive as a result. So even amidst all this good stuff that’s happening — and it’s amazing, by the way, given all of the under the scene, behind the scene undercover efforts to undermine the war effort. You know, it’s no mystery to you, I’ve shared with you countless times how I think that the American left is attempting to sabotage victory over this enemy primarily because they are obsessed with the quest for power for power’s sake. They don’t care what they wreck in the process. They have such an irrational hatred of Bush, that they consider him a greater enemy than bin Laden or other terrorists.
So you have a constant PR defensive attitude as a result from the DoD, and the war? They’re trying to undermine it. Radical lawyers, activist judges, liberal reporters, liberal politicians, and this is how the whole thing works — and if they can prevent us from getting intel by shutting down the NSA program, for example, if they can prevent us from getting intel from detainees via the Patriot Act, then we can’t wage a successful war. So rather than take to the streets they are filing lawsuits.

So this defensive PR mood has now caused the Pentagon to say. Okay: “Growing criticism, what is this growing criticism, the face of growing criticism over the treatment…” Where’s the growing criticism? It comes from the very groups I’m talking about: the ACLU, the Drive-By Media, activist judges, certainly not from the American public. European wacko human rights groups? Well, human rights groups, I don’t care where they are, they’re all wacko and they all fit under the same umbrella. So that’s the criticism, and of course al-AP doesn’t tell you any of what I just told you in the story. No, no, no. “In the face of growing criticism of the treatment of detainees, Pentagon officials have decided to make public all of the military’s interrogation techniques.”
I guess they figure this is the last straw. I mean, we’re not doing anything illegal, and here’s our manual, and here’s what it is. The critics mounting, “growing critics,” will cherry pick this stuff, take it out of context, and write horrible stories, then they’ll go find some detainees that have been let out of — like CNN did yesterday, a detainee that escaped or was let out of Club Gitmo, talking about how he was tortured and so forth, and this cycle, the left, no matter how inept they appear to be at the Democratic Party level, the ACLU and these human rights groups, activist judges are hell-bent on undermining this war effort, folks. It’s not just Iraq. It’s the war on terror. They’re doing everything they can to see to it that this war on terror, I don’t care where it’s waged, is sabotaged. That’s what that story is all about. You might be hearing about this in the next — oh, I don’t know tonight, tomorrow, whatever, but I wanted to get you up to speed on it before the Drive-By Media gets hold of this and starts covering it in a way that will be totally unrepresentative of the facts involved.