RUSH: Brian in Troy, New York. I’m glad you waited, sir. Welcome to the EIB Network.
CALLER: Thank you, Mr. Limbaugh.
RUSH: Yes, sir.
CALLER: (Garbled cell connection.) A while ago I heard you talk about Democrats and war, and I took (cell drops out) I’m a veteran Democrat. Some statistics for (cell drops out) nine out of ten Iraqi and Afghanistan vets that are going to run for House or Senate are running on the Democratic line. In the House and Senate today, veterans are represented by Democrats at a two-to-one ratio over Republicans, and even amongst Republicans — Lindsey Graham and John McCain — when it comes to matters of war, are almost Democrats. So how can you beat up on Democrats for that? 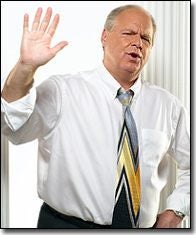 RUSH: Well, let me explain this. Where do I start with this? Number one: I do not automatically accept your figures on “nine-out-of-ten who are running are running on the Democratic side,” and that “the vast majority of veterans are Democrats” and so forth. But I’m not talking about I’m not talking about Don’t be absurd here if you’re going to ask me and talk about Dems, you know, not supporting the war. I’m talking about prominent elected Democrats in Washington — and I’ve played the clips! I’m just repeating what they say. It is This is an ongoing effort to sabotage victory in this war over this enemy: Al-Qaeda.
There is an ongoing effort to do it. The cut-and-run crowd, the people that want to get out. Now, they couch it in, “We’ve got to protect our troops!” Well, the troops don’t sign up for Troops sign up knowing full-well — especially now, sign up knowing — what they’re getting into. That’s what’s so remarkable about . But to say that McCain and Graham sound like Democrats on the war, that’s the one area McCain sound like a Democrat. It’s a one area where he doesn’t sound like he’s trying to curry favor with the Drive-By Media. I mean, it’s absurd to dispute this. It’s ridiculous to dispute it.
The Democrats are obsessed with getting out of there. They’re not obsessed with winning it. They’re not concerned with winning it. They’ve got us already defeated! They think we’re humiliated. “Our reputation in the world is ruined! Our image around the world is ruined! We’ve got to get out! Oh, bring our boys home! This is bad news. We can’t win. It’s a civil war,” blah, blah. Meanwhile, we just keep moving the ball forward and chalking up victories, and what they’re doing is not contributing to morale at all. Did you people see — they didn’t talk about this, but it was clearly big news — the report of how many murders there were in the country last year?

What was that number? It was [over 16,900]. It was in the story about crime being up after five years of violent crime going down, and I remember reading that article, and, you know, the first thing — the first thing — that struck me is here the Democrats all concerned about life. They’re all concerned about death, and they all concerned about the troops and they’ve been counting up along with the Drive-By Media, from the moment we had a thousand battlefield deaths, then the number was 1500, and the then it was 2000, and there was an eager panting before we reached each of these round numbers. (Panting). “Two thousand deaths in Iraq! Ring the bells! Run the presses! Get on the air! Two thousand battlefield deaths in Iraq! Two thousand!”
Then it got to 2500, they did the same thing, as though this is unacceptable, unheard of. “Why, outrageous! Why, we’re getting our troops killed,” and then I saw the report of the number of murders in this country. … Murders. We’re looking it up now. The number was 16,900 murders, and we’ve got a political party all concerned about 2500 deaths. It’s like I said earlier. They have this selective application of compassion.
Like 24 citizens in Haditha massacred by US troops, and all of a sudden, “Why, that’s unconscionable! Why, 24 dead Iraqis! Why, this is worse than Saddam. We’re going to stop this. This is horrible. We’re going to put these Marines in jail. We gotta find out what they did. We’re going to put them in the dock,” and yet they never cared about the 300,000 Iraqis that Saddam killed during his tenure, didn’t care a whit! That would never have been a reason to go in and stop this tyrant from doing it. All of a sudden 24 Iraqis killed in a “massacre,” well, that gives them the opportunity to blame the US military, Brian, and that’s what the Democratic Party today revels in doing.
Any chance they can blame the military, any chance! We killed Zarqawi. They said it was meaningless! Don’t try to tell me that the Democrats care about this. Well, they care about it, but not the same way most Americans do. Most Americans understand that a war is a war, and they understand that until the full details of Haditha are known, they’re not going to rush to any kind of conclusion on this. Democrats in the Drive-By Media already have: 2500 deaths on the battlefield in Iraq? “Get ’em out! Put ’em in Kuwait! Get ’em out of there! This is horrible!” [16,900] murders in the United States and we don’t even hear a word about it.
In fact, most of these cases the Drive-By Media, the Democrats will be sympathetic to the killer. “Well, what were the socioeconomic circumstances? You know, it could be America’s fault that people do bad things because America is an evil country.” I’m going to tell you something, Brian. I’m going to hit you right between the eyes. I’m talking about people who, and there are people in the Drive-By Media that It is time to stop glossing over this and playing ring-around-the-rosy. There are American haters in the Democrat Party. There are America haters in the Drive-By Media. It’s hard to accept; it’s hard to explain, but they are there.

It derives from guilt. It derives from the fact that they’re liberals and they hate capitalism and they hate prosperity, and they hate the “inequality of life” in America, or what have you. It’s sick; it’s maddening and infuriating. But you don’t find America-haters on the right, and you don’t find the hate-America crowd on the Republican Party, and you don’t find a hate America contingent in the so-called new media made up of conservatives. It’s just the opposite, but there’s a bunch of America haters out there. They are prominent; they are in the Drive-By Media, and they’re doing everything they can to undermine this country, they hate this country when a Republican is president and Republicans are running the Congress. Nice try, however. Savannah, Georgia, and Gene, you’re next on the EIB Network. With hello.
CALLER: Hi. It’s quite an honor to talk to you. I’ve been trying for years to get in touch with you, but I was able to get through today.
RUSH: Well, I’m glad you made it, and welcome.
CALLER: Well, thank you. I just wanted to comment on the caller that said nine-out-of-ten of the people that he knows in the military are Democrats?
RUSH: Yeah.
CALLER: I spent 23 years in the Air Force. I met maybe Democrats in that amount of time, and thinking back, I think all of them were under the rank of E-3.
RUSH: Well, look, when I went to Afghanistan, I took a troop visit to Afghanistan a year ago February. What is that? Almost a year and a half ago. There were some Democrats in the troops. They were there. They weren’t anywhere near a majority, but there was a sizeable number of them, at various bases in Afghanistan, but if anybody is going to make the assumption that I am talking about uniformed volunteers as Democrats who are trying to sabotage the war effort, I refuse to accept that there are people that stupid in this audience that I’d have to stoop that low to explain: “By the way, I’m not talking about uniformed military personnel.”
Especially in the context of discussing what we’re hearing from people like John Kerry and Howard Dean and Jack Murtha and Nancy Pelosi and all the rest of this cabal that’s doing its best . Gotta go. I appreciate the call out there, Gene. We’ll be back. It’s not looking good for Algore. There’s a great piece today at the Canada Free Press by a man named Tom Harris. He’s gone out and talked to some scientists who have no connection with corporations or governments. They’re not part of government grants and whatever, and they’ve asked these scientists to assess Algore’s stupid, idiotic movie, “An Inconvenient Truth,” and some of the answers he got are very interesting. Murder was over 16,900 last year? Well, it’s not more than the traffic deaths because that’s around [43,200]. But let’s add them together. Well, leave it! Let’s call it 17,000 in one year, 2500 in three years in Iraq. It’s just all so bogus, folks. Frankly, I’m getting fed up with it.