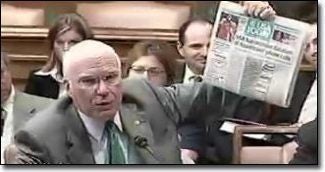 “‘What we address in the editors’ note deals with the fact that we originally reported that the telephone companies were working under contract with the NSA. We’ve concluded that we cannot establish that BellSouth or Verizon entered into a contract with the NSA to provide the bulk calling records.’ In an accompanying story, the newspaper reported Friday that lawmakers on House and Senate intelligence committees have said that while the NSA has amassed a huge database calling records, cooperation with the NSA by telephone companies was not as extensive USA Today initially reported on May 11.”

So they admit they were wrong, but the story holds up. This is shades of Dan Rather and Mary Mapes. Go out there with forged documents to advance the notion that Bush lied about Guard service or what have you, find out that the documents were forged, and Dan Rather says, “Nobody has challenged the depth of our story. Nobody has been able to disprove the contention of the story. We’re standing by the story. If this story is not true, I want to break that story.” Remember when he said that? Dan, it’s been broken by a bunch of bloggers! So apparently the pattern is that you can go and assert anything you want, if you’re the Drive-By Media. As long as nobody can disprove it, then it’s true, even when you have to retract it.