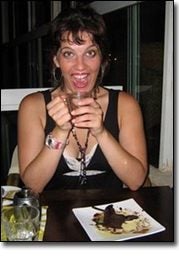 RUSH: CNN just led their hour, their top-of-the-hour news with this. Now, the evacuation is going good now. Oh, yeah. We’re going to get, by this weekend, 7,000 Americans, people out of there. That will be good. Now the problem is ‘the cost.’ Now the price of the journey out of Lebanon is the problem, and we had audio sound bites this morning — in fact, let’s go back and play those, Henderson. I want to go back to the top. We’ll start with #4 and we’ll go through #5 and #6. This is a 20-year-old college co-ed, a college co-ed attending university in Lebanon. (It must have been an attractive student loan program.) Her name is Ashley Marinaccio, and she is asked this morning by Soledad O’Brien of CNN, the if first mass evacuation by shape of Americans done by the Norwegians, did that surprise you?’

MARINACCIO: I mean, look at the evacuations from Katrina. We didn’t expect to be getting out any time soon.

RUSH: Uh-huh-ha-ha-ha. Well, then what are you whining out? If you don’t expect to get out any time soon, why are you whining? ‘Rush, I didn’t hear her whining.’ Oh, you haven’t? Well. Next question. ‘Sounded like a pretty awful trip out there, Ashley. Looks really hot out there.’ Yeah, I wonder why, Soledad. Could it be it’s the Middle East in July? ‘I mean, I saw people covering themselves with tarp and sort of arranging their children around cardboard. Describe what that was like. Pretty crowded?’

MARINACCIO: Yeeeah! It was, unfortunately, a floating refugee camp. It was awful because, um, there’s people with ten kids or you know, seriously, ten kids, and, um, they’re trying to get food and then there’s other people yelling saying that they’re stealing food, and you know. I — I’m assuming that they were hungry, because they had been there since 9:00 and apparently from what I hear, um, at around 11:00 when they came around giving food out, this was the first time people were being fed. Yeah, it was sad.

RUSH: It was sad. It was sad. More on that in just a moment, because I have done additional research, and I have found a story about this getting-fed business. But, yeah, it was really bad. Oh, it’s bad. They were stealing food! I’m sure they were hungry, really, really bad. So the next question: ‘Highly organized, we’re on it, we’re doing a good job, is that how would describe the evacuation?’

MARINACCIO: I mean, the boat’s not made to hold people. I mean, it wasn’t comfortable. and there were lots of flies. It was, um… By the end the trip, people were sort of going crazy. 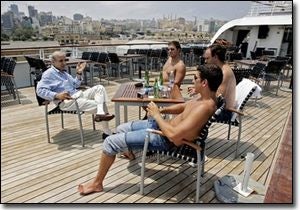 RUSH: All right, so you complain about the trip. You complain about the boat. You complain about the flies. You’re out of there! You’re on television, and you’re a star! Now you’re concerned about the price. No matter what you do for these people, it’s never enough. You just left a war zone, for crying out loud! You just left a war zone! What do you expect to get out on, the Queen Mary II, or the Queen Elizabeth II, whatever it is? At any rate, ladies and gentlemen, I have a photo here — and we’re going to put this on our website. We’ll put the photo on the website — of a bunch much Americans lounging around on a cruise ship off the coast of Beirut.

It’s an evacuation ship, and here’s the caption: ‘U.S. citizen Dr. Sam Dagher, left,’ He may even be smoking a cigar. I can’t tell. He’s got something in one of his hands, ‘looks on as his son Glenn, right, and his friends Jim Nasser, second left, and his brother Jeff, all from Scranton, Pa., sunbathe on the deck of the Orient Queen cruise ship, with the Beirut skyline, background, in the port of the capital Beirut in Lebanon.’

They are sunbathing: jeans and cut-offs are rolled up, look like they’re drinking beer, a little card table out there on the deck of the ship. Really tough, tough, tough tooty — and then here’s the full CNN story that involves Ashley Marinaccio, the college co-ed, age 20. (She’s, by the way, from Long Branch, New Jersey.) It’s interesting. I’ll just give you some interest pull quotes from this, or excerpts from this piece. ‘But Marinaccio said she was pleased the U.S. government had provided food for Americans aboard her ferry although she said it disturbed her that others were hungry and there wasn’t enough to go around.’

This is a Norwegian ship that she was on, 127 Americans on the ship, and what happened was that US Navy SEALs — I didn’t know this, but the Navy SEALs have a Meals-on-Wheels program. ‘U.S. Navy SEALs pulled alongside the ferry,’ on which this babe was getting out of town ‘to deliver boxes of chicken sandwiches….’

That’s where they got their food, and she’s complaining, “but there wasn’t enough to go around.” I don’t know how many were on this ship, 1600 or something, or 1200, whatever it was, and she said, “‘It was for American citizens only and that actually made a big stink on the boat, because people who weren’t American citizens were trying to get the food. Other people were screaming, “It’s for Americans only, show your passport.”‘” These are people getting out of the war zone! Let me ask you something, Ashley: You’re on this Norwegian ship. You’re praising the Swedish. You’re praising the Norwegians. 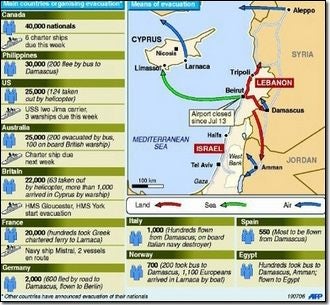 You’re praising whatever other little podunk countries are sitting there rat trawlers over there to get people out of Beirut. They don’t put any food or water on the boat, just herd you people on there like a bunch of cattle and all of a sudden riding to the rescue, the US Navy SEALs’ Meals-on-Wheels program, food for Americans, Why don’t you blame the Norwegians for not provisioning the ship? Who would try to get 1600 people out of there or 1200 or whatever it was without putting any food or water on the boat?
Well, because they were in a hurry, and people want to get out of there, it’s a war zone, and they’re only going to Cyprus, what’s it gonna take? How long does it take to get to Cyprus. Cyprus is a little island right off there. Can’t be very long. Then Ashley Marinaccio added, “I understand this was the government’s food, but in the case of an emergency everybody needs to eat whether you’re an American or not.” I think she could have shared. You know, it’s loaves-and-fishes time, Ashley. You’ve got 127 chicken sandwiches brought by the US Navy SEALs Meals on Wheels program; you’ve got Americans having to show their passport.
Share it. Share it! It’s a short trip. If it’s so important that everybody eats, then share what you have. Find a way to make 130 chicken sandwiches and whatever else they had go around. It’s a short trip. There’s not a whole lot of sustenance needed, and I doubt anybody starved on the trip anyway. My real question is, “Were they vegetarian meals?” because if the Navy didn’t think of that, there will be hell to pay. Well, you gotta take these dietary restrictions into account. Were there diabetics on board? Were there people that were glucose intolerant? You know, some people can’t eat bread and gluten. Where was the US government on this? I mean, they should have found a way to take a survey of the 1200 people and find out the dietary requirements of everybody on board if they’re going to deliver any food. They could have killed somebody with this food! Katrina! You know, this could have been a disaster averted if they’d have done just a little research and sent out menus.