RUSH: Let’s go to audio sound bites four, five, and six. On Face the Nation yesterday Bob Schieffer interviewing Syrian Ambassador Imad Moustapha, and Schieffer says, “What is Syria willing to do to get some sort of talks started here?”
SPOKESTERRORIST: This administration has the unique position of not talking to Syria, which was not the case in the past 30 years. If you remember, every US president starting with Richard Nixon and ending with Bill Clinton did actually visit Damascus. If the United States wants to involve in serious diplomacy, of course Damascus is more than willing to engage.
RUSH: This is such disingenuous pap. This is nothing more than a sideshow. Here is a terrormaster, a terror spokesman on CBS complaining and whining that Bush hasn’t gone to Damascus. Well, maybe it’s a new day, Moustapha. But guess what? The Drive-By Media picked it up. The Drive-By Media got the hint. They understood that a marker was being laid down, and we have a montage of leftists and Drive-By Media types who have now whipped themselves into a frenzy all because Bush won’t talk to Syria. We have TIME’s Joe Klein, MSNBC Amy Robach, McLaughlin Group host John McLaughlin, Tim Russert, E.D. Hill of Fox News, Brit Hume, Wolf Blitzer, and Senator Chris Dodd. Listen to this.
JOHN MCLAUGHLIN: Syria is ready, willing, and has a history of dealing with the United States, but they don’t want to be lectured to.
AMY ROBACH: Does the US have plans to speak directly to Syria?JOE KLEIN: A Syrian official told me that they wanted to talk to us but we weren’t interested in talking to them. We should be interested in talking to them.TIM RUSSERT: Will the United States talk directly with Syria?

E.D. HILL: Syria sounds like they want to talk.

BRIT HUME: Should we be talking to Syria directly?

CHRISTOPHER DODD: This sort of juvenile attitude that we’re not going to talk to people we disagree with I think has contributed to the problems we’re facing today.

RUSH: No, you know what it’s done? It has focused the problems and it’s given us the opportunity to deal with them once and for all, senator, and the rest of you dingbats in the Drive-By Media. Why in the world would anybody want an infinite amount of time in the future to go on exactly as it has for the last 40 years? “Because it’s a striving effort for peace, Rush.” Well, come on, wake up! Everybody knows there isn’t peace over there, and there hasn’t been peace in a long time, unless you have peace defined by the tyrants and so forth. This is absurd.

When you engage in a dramatic change in policy that’s been in place for how many decades, three or four, it’s natural that a giant upheaval is going to take place. It is natural people aren’t going to understand it. It’s natural that Bashar Assad will be quite upset, that Bush won’t come talk to him. Well, why should Bush go talk to him? There is nothing that’s going to be accomplished talking to the terrorist leader who is a puppet and associate of Iran. There’s nothing that’s going to be accomplished by going and talking to Mahmoud Ahmadinejad other than to give these guys stature. Can you see the president, can you see Air Force One landing in Damascus, and — Reagan faced the same thing. “Why aren’t you talking to Brezhnev?”

“Why aren’t you talk to Andropov?”

“He’s going to die pretty soon.”
“Why aren’t you talking to the Soviets?”

“I got nothing to say to them. If they want to surrender, I’ll be glad to meet them.”

Where did that attitude go? Now we have to appease these people. Air Force One lands somewhere in Syria, and Bush gets off to meet with Bashar Assad, a kid, the equivalent of an American trust funder. What the hell are we talking about here, Chris Dodd, we’ve got to talk with these people? What’s it gotten us? It gets us nowhere. What did talking with the Soviets get us? This is so out in the open understandable, it makes me wonder, these people have brains, too. What in the world do they not see? What in the world is it about the last 30 or 40 years that they want to continue as the status quo?

One more bite before we go to the break. John Bolton, Late Edition with Wolf Blitzer. Blitzer says, “Well, you know, he was referring to Syria and Iran, which the US sees as behind Hezbollah’s move and Hamas’ move in Gaza for that matter. Is it wise right now as Condoleezza Rice prepares to head off to the region for the US to start engaging Syria and Iran directly?” 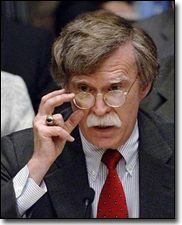 BOLTON: Well, I don’t think that’s appropriate at the moment. I think what we need Syria and Iran to do is stop supporting and financing terrorist groups like Hezbollah and Hamas, Palestinian Islamic Jihad. You know, Iran and Syria could contribute a lot if they’d stay out of the internal affairs in Lebanon and let that new democracy flourish.

RUSH: Now, there is a great illustration of two things. Utter fact and honesty combined with diplospeak. The diplospeak was, “Iran and Syria could contribute a lot if they’d stay out of the internal affairs in Lebanon and let that new democracy?” Don’t make me laugh and Bolton knows they’re not going to stay out of it until they are forced to. But it’s silly to say we have to go meet with these people. He’s exactly right. “I think what we need is Syria and Iran to stop supporting and financing terrorist groups like Hezbollah and Hamas.” But just saying it isn’t going to do it. Bush could get off the plane, go meet with Bashar Assad, be on the phone with Ahmadinejad. “We think you should stop funding these guys,” they’d start laughing at him on the phone.

“Oh, you do, Mr. President? You are so funny. Well, you should stop funding the Israelis.”

Well, this is interesting. We just had the audio sound bites, the Drive-By Media montage and that terrorist spokesman from Syria saying that Bush needs to speak to Syria, that we need to talk to Syria directly, that Syria needs to have a role here. I’m holding here in my formerly nicotine-stained fingers, the latest dispatch from the Israeli newspaper Ha’aretz. ‘The Israeli prime minister said Monday that Syria cannot be a partner to diplomatic efforts to secure an end to fighting in Lebanon and northern Israel. Syria is not a partner to diplomatic efforts. The Syrians could earn recognition if only they weren’t keeping their finger on the trigger on two fronts in Lebanon and in Gaza.’ Hallelujah, thank God. Thank God the Israelis are up to speed and are willing to say the truth about the Syrians. They don’t have a dog in this fight diplomatically because they’re the ones pulling the trigger against us, with Hezbollah and Hamas.