CALLER: Thanks, Rush. Thank you for taking my call.

CALLER: The reason I called, I remember back in 2004 you counseling us to be patient with Bush because he wasn’t firing back with the 527s and Kerry attacks against him, and I would urge the same caution here and same patience with the Israelis. They’ve never been one to pay much attention to world opinion, and I think they’re massing on the border, and I think we’re going to see a large pincer movement going into southern Lebanon and maybe beyond, who knows what else. But I think they’re preparing, and I think they’re going to do a marvelous job for us.

RUSH: Israel lights the way on this. Israel doesn’t fight minimalist wars. It hasn’t in the past — and I mentioned Ralph Peters had a piece on Saturday in the New York Post. Headline: ‘Can Israel Win?’ and he says not the way it’s fighting. I’ll give you some excerpts of this just so you understand what I’m talking about, but you mentioned the tanks. You mentioned Israel is massing the tanks on the border here. Can I point something out for you? Wall-to-wall coverage this weekend of the war on Fox, CNN, PMSNBC, et cetera, and has it struck you, folks, have you been aware, have you realized that you haven’t seen any pictures or videotape of all the rockets that Hezbollah has lobbed at those tanks?

Oh, we hear from the reporters, the tanks are massed just across the border and we see videotape of the tanks. Have you seen any of those tanks targeted by Hezbollah? Now, this is not just an empty, baseless question. There’s a reason for it. Because I would think that if you’re Hezbollah, and the enemy has all kinds of tanks and armored personnel carriers, artillery and so forth, it’s an appropriate military target to hit, is it not? Fire your Katyushas at it, fire your rockets at that amassed base of weaponry and take it out. The purpose of armies is to kill people and break things, right? This is elementary military strategery, folks, but Hezbollah doesn’t seem interested at all in taking out those tanks, and there are lots of them that have been amassed on the border.

Don’t tell me it’s because they can’t recalibrate their aim, the azimuth and the algorithms and so forth. Don’t tell me. I’ll tell you why they’re not aiming at those tanks is because they don’t care about the tanks. They want to kill innocent civilians. They want to kill Jews. This is not about a war to them. This is about continued acts of terror. You don’t get 72 virgins for wiping out an Israeli tank. You just don’t. I haven’t read it, but I am relatively confident in pointing this out. So, you know, network info babes, go stand by the tanks. It’s going to be your safest place to be because they are not going to be targeted. The worst place the info babes and the media could be is next to some Jewish settlements or some Jewish civilian populations, because that remains the target.
You know, I was told over the weekend, there’s a similar thing that happened here in World War II. Remember Hitler’s bombing campaign against England, he was preparing for the invasion. The goal of that battle for the Germans was to gain air superiority over the British isles and they were within literally a few days of succeeding by concentrating their attacks on RAF airfields and radar installations and other similar support units. They were taking out the Royal Air Force’s ability to wage war. Then, a British pilot on a bombing mission over Germany one night got lost, he accidentally dropped his load, so to speak, on Berlin. 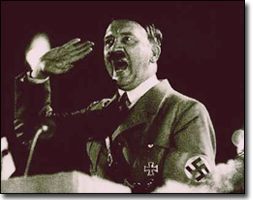 That just made Hitler so damn mad and the Third Reich high command so mad that he shifted the focus of his bombing from the strategy of acquiring air superiority to essentially terror bombing, bombing innocent civilian targets in London and other parts of the UK in the hope of breaking the will of the English people. Well, this gave the RAF a breather and a chance to put itself back together. It did not destroy the will of the British people because Churchill was there guiding them through it all and it made them mad as it made Hitler. The RAF was able to put itself back together and wage war, and as we all know what happened, Hitler went down to defeat with via suicide and a number of other things.
The point here is, ladies and gentlemen, if Hezbollah was anything other than a bunch of wacko terrorists, it would be using its military assets to attack Israeli military assets, and it’s not, but the Israelis are doing that. The Israelis are aiming at every military asset of Hezbollah they can find. They’re trying to root out these bunkers, they are trying to find the cache of weapons that’s inside them, they’re trying to bomb the bunkers that the Hezbollah cowards are hiding under, and they are bombing civilian locations where the rockets that Hezbollah is launching are being launched from. Hezbollah, typical terrorist cowards, are hiding behind innocent civilians, and don’t forget this. Pointed this out last week. Hezbollah is not letting innocent Lebanese civilians leave the neighborhood. They’ve got roadblocks. They want these people killed.
There’s video of the tanks right now. I’ll bet not one tank has been hit. I’ll bet not one tank has been lost. I’ll bet Hezbollah’s not even trying to hit the weapons of war as used by Israel. They’re just trying to kill Jews, folks. It’s just that simple. They’re just engaged in blatant terrorism, which is their stock-in-trade. Why should they change now? The real sad thing about this, too, by the way, is that the people responsible for this are not suffering at all, Bashar Assad, Ahmadinejad, and whoever else in these satellite countries that’s behind all this. The Hezbollah guys, they’re dying, but the leadership is still pretty intact. But it is Israeli civilians and some Lebanese civilians that are being killed here or wounded and injured. But, far more Israeli civilians are being wounded and killed than are Lebanese. Because even as the BBC is reporting, most of the Lebanese dead are in fact terrorists disguised as civilians living in these homes which are serving as rocket launchers. Jim in Kansas City, Missouri, welcome to the EIB Network, sir.

RUSH: I’m glad to have you.

CALLER: Let me get right to it. As I’ve been surveying the general attitude of what I see in the United States at this time, and more specifically focusing on your previous comments about Mr. Buckley and the idea of a minimalist war, my thought has been for quite a while that in order for the United States to be totally shaken out of what I feel is a very complacent, even apathetic attitude, is that we’re going to have to have another 9/11 event that is going to be of a magnitude that the American people, or at least enough of them, will get the feeling that the only way we can do this is to take Israel’s approach. We just gotta go after ’em and get it done. And while I don’t relish the idea of this, I just don’t see any other way that the broad spectrum across the political boundaries is ever going to change unless and until that happens. So my question is: What are your thoughts on that, and if not that scenario, what would you see as a scenario?

RUSH: Well, I’m not going to sit here and advocate for another 9/11 type attack. I have, like you, on many previous occasions, I have said that I fear it is going to take that. Every day last week I thought I went through this, explaining why I think it is. We have so much

affluence and prosperity in this country, that we have the freedom and the time to ignore it. If we don’t want to pay attention to it, we don’t have to. As individuals, if we want to assume that, ‘Hey, you know, that war is over there. It has nothing to do with me. Life is to be enjoyed. I’m not going to get all caught up in this.’ That’s the safe play, because once you commit to taking it on, then of course you’re committing to being involved in doing something about it, and I don’t mean joining the army. But you’re committing to taking it seriously, and to some people, there’s no need. The United States does not appear to be that threatened by this. But then you bring in such unknowns as Iran, and the question, ‘Do we want them to become a nuclear Iran or not? And if we don’t, what do we do about it? And if we don’t care, what’s our plan to deal with them afterwards?’ And I don’t know that anyone’s got a plan to deal with a nuclear Iran, other than the famous containment and appeasement and favorite words of the eastern elites, intellectuals. As to whether another 9/11, certainly don’t want to wish that. But look it, networks still will not pay videotape of what happened on 9/11. It’s just too traumatic, it’s just too soon. Remember, it was too soon to see United 93? It’s just too soon.

Our emotions haven’t recovered and so forth. So too many people, or enough people in this country, can check out. ‘Ah, I don’t believe it’s a serious problem, don’t want to play, don’t want to participate.’ In that case it’s tough to muster a national will to deal with a problem that other people think is severe and serious. The parallels here are eerie — and I’ve pointed these out, too, the parallels to Winston Churchill trying to warn the British people in the late thirties and early forties about what was going on in Nazi Germany, and the British leadership at the time just didn’t want to hear it. They had no desire to hear it, and even if it were true, they said it’s not our fight, not our problem. We don’t want to get involved. Here the same thing. I guess liberals are liberals, and the human nature of liberals is consistent across the span of generations.