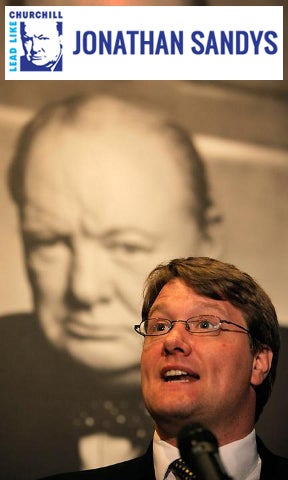 CALLER: Rush, I just literally want to say that I’m a great fan of yours and I wanted to talk to you about the point you made about Winston Churchill who is actually my great-grandfather, but he thinks —

CALLER: Thank you very much.

CALLER: Rush, what I wanted to do, I actually come to America, giving lectures about my great-grandfather, and I didn’t realize how bent the press are toward the Democratic Party and that it’s not really sort of a fair press as we got pretty much in the UK.

RUSH: Wait a second. Hold it. Hold it, Jonathan. Wait just a second.

RUSH: I read the UK press, and there’s nothing fair about it. You’ve got the Guardian. You’ve got as many leftists over there, if not more, than we do.

CALLER: Right. No, no, I’m talking about major papers in London that are bent toward that type of thing.

RUSH: Okay. Well, then, all right, I understand.

CALLER: You’ve got terrible papers here like the New York Times. I mean, that is just disgraceful what they did, revealing that information. You know, you’ve got some really bad newspapers here, and but for your show and but for other shows and other internet feeds like NewsMax and things. I don’t think you’d actually… There wouldn’t be any fair press, but what I want you to respond to is Buckley’s comment about the legacy that George Bush is going to leave his successor. In my opinion, George Bush has acted more like Churchill than previous presidents before him, purely and simply because at the time when Bush was threatened, when 9/11 happened, he acted immediately. It was, “We’re going to go to war. We’re going to fight the war on terrorism. We’re going to actually solve this problem,” and it’s the same thing that Churchill wanted to do in the thirties but everybody was so hung up on the appeasement idea.

Chamberlain wanted this. He didn’t want to go to the war, and Hitler was promising all the way through. “We’ll do this if you promise not to go to war with us. We won’t invade Czechoslovakia. We won’t do this; we don’t do that,” et cetera, et cetera, and all of England was falling for this, and saying, “Okay, fine. Yep. No problem. We’ll do it.” Well, Churchill, who didn’t really give a damn about diplomacy, just wanted to get the job done, said, “Look, Hitler is doing this.” George Bush has done exactly the same thing, which Clinton should have done. He stood up, he said, look, these are terrorists, these are problems. These people are going to build up and cause us big problems. If they haven’t got weapons of mass destruction now, they will do at some stage. We need to do something about them now. So I think the legacy that George Bush is going to leave his successor is one of great strength in America, maybe not financially because wars cost money, but certainly a great strength because you guys won’t take any more.

RUSH: Well, it’s heartening to hear. That was one of the disturbing things that Mr. Buckley said, that George W. Bush doesn’t have a legacy. Certainly when it comes to foreign policy, it is that we won’t take it. That’s why so many people are fearful of the next administration not being of the same timbre, tenor, and resolve. And of course that’s the way it is in America. Anywhere you have Democratic elections that’s the way it is. So that’s why some people get concerned in this country about the will of the people. What was the will of the British people back when your grandfather was doing his best to alert them to the danger?

CALLER: Well, the people — funny enough — the consensus was people were pretty much behind idea but it was the government that didn’t want to do it and the government wasn’t feeding the correct information. They were holding back the important documents saying, ‘Look, Germany is re-arming here, and Germany is re-arming there,’ and it was being kept back by people like Neville Chamberlain and Stan Baldwin because they didn’t want to face the issue — and so they were holding this information back, and it was but for people who approached my great-grandfather and said to him, ‘Look, Winston, this is what’s happening, these are the actual facts and figures,’ and then Churchill would stand up in parliament and say, ‘Look, this is what the government is suppressing.’

Slowly but surely people started to turn around, the general public started to turn around and accept this war may well happen, but still he was unpopular, still he remained unpopular within his own party, and George Bush has done exactly the same. President Bush is not a diplomat. He’s never wanted to be a diplomat. He just wants to get the job done. He wants to protect Americans. He loves America. He is an American, and he wants to protect them. Unlike the British Prime Minister Tony Blair who wants to win every election possible, okay, George Bush gives a damn about America, and if anybody says that he doesn’t, they’re wrong. I may not have met George Bush, but I can certainly hear from his speeches, I certainly see from his actions, the man is honest, and the man is decent, and he’s doing a good job.

RUSH: Jonathan, thanks very much for the call. Your sense of timing is impeccable, by the way. I’ve only got about 20 seconds left in the segment, which is enough time to reintroduce you to people who might have tuned in the middle of your comments. This is Jonathan. Is your last name Churchill?

RUSH: Okay, well, regardless, he’s Jonathan Sandys, and Winston Churchill’s great-grandson. He’s in Macon, Georgia, and we thank you for the call. Well said, sir!