RUSH: You know, I’m amazed at the number of kooks who believe that 9/11 was staged — and believe me, they are out there. I have seen some of the wacko movies these people have produced on the Internet. I’ve watched them, because I like to get a bead on what kind of kookery is out there, because this program speaks ‘truth to kooks.’ There are people out there who think an airplane didn not hit the Pentagon and that even though two planes hit the Trade Center towers, they were brought down not by the airplanes, but by demolition charges and the government did this on purpose to get the people of the country on a war footing to support bigger and powerful military spending and establishments and so forth and they genuinely believe this.

It’s not just kookery by the way. The poet laureate of New Jersey, Amiri Baraka — he goes by the name LeRoi Jones — came out and said Jews blew up the World Trade Center. That’s why all the Jews got out of there before the planes hit. Now you might say LeRoi Jones, the poet laureate of New Jersey, is a kook but there’s plenty of people who believe this story and some of them are not kooks. But regardless I’m amazed how many believe 9/11 was staged and don’t ask if what happened at Qana was staged.

Same event, by the way, same town, ten years ago same kind of incident. Same guy holding the same body for how many hours? The scuttlebutt is that some of these pictures are from ten years ago show the same guy holding up victims then! I haven’t been able to nail that down — and more and more people are beginning to think the Hezbos actually brought down the building themselves because the building stood for seven to eight hours after the Israeli strike. Now this is a classic illustration of how the Drive-By Media works. Also I should tell you that the Red Cross has published that only 28 corpses were evacuated from Qana, contrary to Lebanese reports that 57 people were killed.

‘The Red Cross announced on Monday that 28 bodies, including those of 19 children, had been found at the site of the Qana blasts. Additional bodies are expected to be found over the coming days.’ Now, have you noticed that more and more doubt about this story is being raised? I told you yesterday: ‘I think this is suspiciously just like the Hurricane Katrina coverage and that aftermath. The initial reporting was dead wrong on so many fronts, and that story line remains ‘true’ even though it has been debunked. There weren’t any murders, all those rapes and so forth in the Superdome? None of it happened, and yet the Drive-By Media, without any accountability including self-accountability, has not corrected the record.

They’re still handing themselves a Pulitzer for this. Same circumstance here in Qana. The evidence is beginning to mount that this whole thing was staged. By the way, about this, one other thing. We talked yesterday, and I read your e-mails and some of you were stunned at how directly I spoke regarding the concept of civilian deaths. Well, we’re in a battle here with a bunch of terrorists, and we know how they operate. We know that they blow their own kids up. We know that they teach them how to do it. We know they consider the death of their own children a victory. 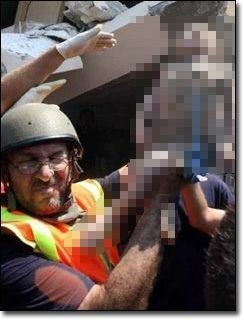 Why is it so hard to believe that they would murder twenty-eight or fifty-seven of their own in order to gain a PR advantage when that’s the main weapon that they have not being a strong military power? What is so hard to believe? Where’s the stretch? A group of people strap bombs on their kids and decides to blow up fifty-seven of their own citizens (or twenty-eight and say it’s fifty-seven) and then parade the corpses around to various photographers. What’s so hard to believe there? Now, if you’re in a battle with people like that what do you do?
You have to understand: that’s who they are and that’s how they fight. You might even say — you might have to say if you’re just a straight and objective analyst of the war — based on how this has all fallen out you’d have to say — that if the Hezbos did indeed bring down their own building and ended up killing twenty-eight of their own people including nineteen children, you would have to say it was a smart move. You would have to say it’s a tactical move that was very smart. Look what it got ’em. It got ’em a great PR victory. To them that matters.
There are more and more stories of how the Israelis are “losing” this. I’m beginning to have my doubts about this, by the way. I think the Israelis are performing a… Well, I’m not going to characterize it, but I think they are accomplishing much more and there’s much more strategic plan under way than might appear to be the case on the surface. Look, the evidence is mounting — and notice how the great Drive-By Media in our country just accepted whatever the enemy told them and showed them and ran with it.

Notice how they’re completely ignoring the facts about the Club Gitmo story that we had for you yesterday afternoon before the end of the program. It was the guards being tortured by the inmates! Nobody’s picked up the story. The Washington Times has it. They’re just running the AP version. It has not made a dent because it doesn’t follow the action line of the original story that the U.S. is guilty of torture and Bush is responsible for it. So once again we have a just a classic example here in Qana of how the Drive-By Media works.

Show up on the scene of the disaster — in this case not caused by the Drive-By Media, but you show up — you take one side’s version of it and you broadcast that all over the world. You don’t question it. You don’t doubt it. You pronounce guilt and innocence in the circumstance and then right down the road you go on to the next story to commit the same act. Why haven’t they demanded an investigation? Now that there are conflicting reports about how these people in Qana actually died, why aren’t the people who are supposed to be the most curious among us, highly trained professional journalists demanding an investigation?

Why do they wait to have their information spoon-fed to them by the enemy? As I said yesterday, it’s because they don’t want the facts. We’re not dealing with reality here in this war or this skirmish. The action line here is that Israel uses disproportionate force, that it doesn’t care about killing innocent women and children. The U.S. is bogged down on Iraq. That’s horrible. The detainees at Club Gitmo are victims and we use torture on them — and the world is threatened and imperiled, particularly health care, because of the illness of Fidel Castro.

RUSH: There’s a lot of writing out there today. I’ve noticed it all over the place — and by the way, I’m not going to distance myself from this. Even yesterday when I was talking to the former prime minister, Benjamin Netanyahu, I myself asked him. I said, ‘This doesn’t seem to be the same old Israel.’ It used to be they’d go in there and wipe these guys out in six or seven days. Is there less resolve and so forth? He did not want to answer it in the context of that question because they’re trying to present a united front, everybody fully supporting a government in this war.

I remember saying to him, ‘I’m not trying to interrupt that because I wish I knew what it was like. We don’t have that in this country.’ But there are more and more people starting to say… Later in the interview, by the way, he did answer the question by saying: power, the projection of power shortens the duration. The more power, the less duration. He would be — in my mind; I’m prejudiced, obviously, but he would be a great prime minister again if the opportunity would avail itself, but…

More and more people are starting to write about how ‘the Israelis are losing this,’ and you know what I think this is? I think the vast majority of it — and I hate to say this; it makes me mad to say this, but I think the vast majority of the writing out there from people who think Israel is losing, I think they’re just responding to the Drive-By Media reports. I have to tell you, there’s no exception. I don’t care where you go, it’s all not very good, not very accurate. 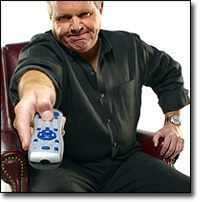 It’s all still Israel is an SOB. Israel is mean, Hezbollah, the Lebonese people are just as innocent, clean and pure as the wind-driven snow. I think a lot of people can’t help it. They just fall pray to the media bubble on a daily basis and we’ve talked about this before. Sometimes even I, your guiding light through times like this, fall prey to it to and I have to slap myself (slaps face) like that to come around — and I do, and that’s when I warn you: Folks we’re getting sucked here into another media bubble. Here’s what I think is going on — and I said this at the outset too.

I think there’s a strategery going on. The fighting right now is raging as intensely as it has since this whole thing began, even as we speak, but the strategery has always been to encircle the Hezbos and cut them off. Destroy their lines of communication, destroy their lines of redistribution, infrastructure, the ability to get re-supplied and so forth — and then go in and destroy them. I think — and I say this for two reasons. One, because when I see every news outlet report the same thing, it’s like a conventional wisdom has formed, and I instinctively go the other way.

The second reason I say this is because I love the Israelis and I don’t think they’ve changed and I have great confidence, and I really believe they’re making more headway than we know and I think that is part of the strategery. The reporting from that area is extremely poor. Most of the reporting is enemy propaganda on scales a little smaller than the outrage we saw coming out of Qana. So it’s actually very hard to know, but there may be more progress than we know, and one of the reasons I say that ladies and gentlemen… (shuffling papers). I’m holding here in my former nicotine stained fingers: ‘The Syrian president…’

Oh, and that’s another thing! Every person in the Drive-By Media is saying Fidel Castro has ‘transferred his presidential powers.’ He’s not a ‘president.’ Nobody elected him. He’s a dictator. He transferred his tyranny to his brother Raul. He transferred his dictatorship to his brother Raul! Anyway, ‘Bashar Assad, the president,’ (laughing) ‘of Syria has told the Syrian military to raise its readiness, pledging not to abandon support for Lebanese resistance against Israel.’ This ‘Lebanese resistance.’ Do you know what that is? The ‘resistance’ in World War II were those who opposed the Nazis in countries the Nazis were trying to invade and conquer, the French resistance and so forth. I know a guy in the French resistance. He blew up a couple of bridges. He’s a member of a couple of country clubs with me: Prince Bourbon. He’s a great, great guy, but he was part of the French resistance. So now — note the way words work — the ‘Lebanese resistance,’ resisting the ongoing slaughterhouse, if you will, of Israel.