RUSH: Larry in Tampa, nice to have you on the program, sir. Welcome.

CALLER: Thanks, Rush. Congratulations on your anniversary and your duration on the radio. I appreciate your work.

CALLER: My comment is: all this that we hear about the Israelis invading Lebanon and the blasting of this town and all the civilians that are killed, sounds very similar to the incident that happened in Jenin not long ago, and I was wondering what your perspective of that was.

RUSH: Interesting thought. First let me go back and cover some ground here about Qana, because we did this back in the first hour. It is becoming apparent that there’s more to this story than the Drive-By Media has reported. The original reports had fifty-seven dead after Israeli attack. The Red Cross said there were twenty-seven bodies that they’ve recovered, mostly ‘women and children.’ It’s also been learned that the building in which these people were housed somehow stood for six to eight hours the Israeli assault. So it is being posited out there that perhaps the Hezbos brought the building down themselves after the Israeli attack failed to do so, creating their own dead, murdering their own civilians — and if you think that’s a stretch, they do it every day! 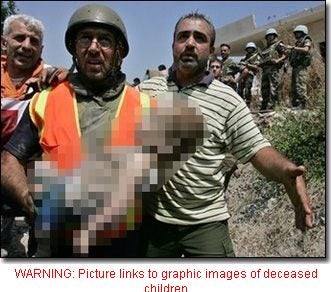 They strap bombs on their own kids; send them out to blow themselves and innocent Israelis up. They are an enemy that considers the death of their own children a victory. This is who they are. This is the way they fight wars. They can’t compete militarily. They have to fight the spin war and the PR war and the Drive-By Media war, and they’re doing so. So the original report out of there was: ‘These dastardly Israelis! Look at what they’ve done! Fifty-eight innocent people killed with an attack! Why, this is outrageous. We need a ceasefire,’ and of course the Hezbos were parading a couple of bodies around for to different still photographers, different angles.

One little boy who was dead had a brand new, light blue pacifier around his neck that had dust on it, damage whatsoever. Clearly it had been put on this little boy’s body after he had died. The Drive-By Media is no longer interested in Qana, especially now. It doesn’t fit the storyline or the action line if this thing was actually a Hezbo atrocity. So their ‘natural curiosity’ seems to be absent here. They don’t seem to be curious to find out what went on. Now, Jenin is interesting. Jenin happened ‘on April 8th[.] [T]he Palestinian news agency Wafa was reporting that Israel had committed the ‘massacre of the 21st century’ in the Palestinian refugee camp in Jenin. ‘Medical sources’ informed Wafa of ‘hundreds of martyrs.’ This was a lie, concocted not only for local consumption — to keep the Palestinian people whipped up in a patriotic, Israel-hating frenzy — but mostly for export to the West.’

By the way, this is from Richard Starr in the Weekly Standard published in the May 8th issue. ‘That same day, you could hear breathless reports of the supposed Israeli atrocities in Jenin being spread by Palestinian sources on NPR, CNN, and elsewhere,’ in the Drive-By Media. ‘Typical was the hysteria of Nasser al-Kidwa, the Palestinian representative to the United Nations, on CNN: ‘There’s almost a massacre now taking place in Jenin. Helicopter gun ships are throwing missiles at one square kilometer packed with almost 15,000 people in a refugee camp… Just look at the TV and watch, watch what the Israel forces are doing…. This is a war crime, clear war crime, witnessed by the whole world, preventing ambulances, preventing people from being buried. I mean, this is an all-out assault against the whole population,” he said. ‘No, this was an all-out assault on the truth. There was a pitched battle in Jenin. But the ‘hundreds’ of martyrs were a cynical invention. The death toll was 56 Palestinians, the majority of them combatants, and 23 Israeli soldiers.’

So if you go back and you compare Jenin to Qana, what you find is a repetition of history. It’s a military tactic. It’s what I’ve been trying to impress upon people as best I can: this is a war, and we are fighting a different kind of enemy that has a different kind of tactics and they will gladly kill their own people or put their own people in the line of fire to be killed. They consider that victory. They, like Al-Qaeda in Iraq terrorists, understand how to play Western media like a Stradivarius. They know exactly what they’ll get out of it, and they do. So it’s just another example. The Drive-Bys are just causing all kinds of havoc and hell moving on down to the next story. It’s Katrina all over again. It’s the same thing. Qana is just a new Katrina in the way the aftermath is being reported: the lies, the lack of facts, the lack of reality, the lack of curiosity — and, prior to that, on April 8th, Jenin.

Good call on that Larry. I appreciate it.