RUSH: The ratings for CBS’ 60 Minutes on Sunday night were than for the football game on NBC that night, with Mahmoud Ahmadinejad. Listen to this. (laughing) Just listen to this. Mike Wallace — out of retirement, by the way, to go over and do an interview with Ahmadinejad, just as he interviewed Saddam Hussein. I think he’s interviewed Fidel. How about those pictures of Fidel, by the way, in the red Santa Claus jump suit there with Hugo Chavez? I swear in one of those pictures he looks like a corpse and they’ve just got the hand positioned. I looked at that and say, ‘Does this man look alive?’ We’ll see. At any rate, the question from Mike Wallace, ‘What do you think of George Bush, as a man, as a commander-in-chief of the so-called free world?’

AHMADINEJAD (via translator): Mr. Bush can be in the service of his own people. He can save the American economy without killing people, without occupation, without threats. I am very saddened to hear that 1% of the total population is in prisons, and 45 million people don’t have a health care cover[age] That is very sad to hear.

AHMADINEJAD (via translator): So please give him this message, sir. Those who refuse to accept an invitation to good, will not have a good ending or fate. 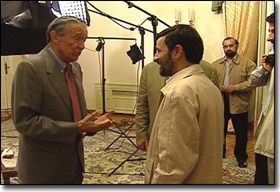 WALLACE: What does that mean?

AHMADINEJAD (via translator): Well, you see that his approval rating is dropping every day. Hatred vis-&agrave;-vis the president is increasing every day around the world. For a ruler, this is the worst message that he could receive. Rulers and heads of government at the end of their office must leave the office holding their heads high.

RUSH: Unbelievable! The Democrat talking points! Do you know who this guy is? You know what we need to do? Koko? I’ve got a research project for you. I read this. This has been the last two months. Ahmadinejad did an extensive interview with der Spiegel, the German magazine, and he made no bones about who he is or what he wants or what his objectives are. Mike Wallace didn’t get to finding out who this guy is, and this is just stark. In that interview you didn’t hear a word about American health care. You didn’t hear a word about Bush’s approval rating. What you read in the der Spiegel interview with Ahmadinejad was how we’ve got to move Israel. We’ve got to move the Jews out of the Middle East; it’s unfair that they’re there.

The Holocaust was caused by the Germans; Israel ought to be in Germany. Israel ought to be in Europe. He didn’t hide his anti-Semitism, didn’t hide his hate. Even without reading that you all know that the oil price had been spiking upward every time Mahmoud suggested Israel be wiped out! In fact, he said it just the other day, and the French foreign minister, Blaze Douste-Blazy, whatever the name is, Phillipe Douste-Blazy said just prior to Ahmadinejad saying that, had said that Iran is being very reasonable, you can deal with them and so forth. Then Mahmoud comes out and basically says Jews need to be exterminated, and Douste-Blazy had to pull back and condemn those remarks. Mike Wallace says, “President Bush has said he’s vowed he will not allow Iran to develop a nuclear weapon. Do you believe him?”
AHMADINEJAD (via translator): The problem that President Bush has is that in his mind he wants to solve everything with bombs. The time of the bomb is in the past. It’s behind us. Today is the era of thoughts, dialogue, and cultural exchanges.
RUSH: Right. This from the guy who sponsors the whole technique of suicide bombing. This from the guy whose country is making all of the IED explosives, these roadside bombs that are being used in Iraq. This from the guy who is supplying rockets and other weapons to the Hezbos in southern Lebanon. It is clear who Mahmoud thinks his audience is when he goes on 60 Minutes. He’s talking to pacifist Americans. He’s talking to the American left. He is attempting to energize the American left here. The American left is a bunch of patsies. The American left is soft. He’s trying to energize them and get them all excited about “peace” and dealing reasonably with Mahmoud because “bombs are in the past.” Bombs are in the past. We’re developing a nuclear weapon, of course, but bombs are in the past. “Today’s the era of thoughts, of dialogue, and cultural exchanges.” Try flying over Iran. Say, “I want to fly over your country in a cultural exchange.” They won’t let you do it. You’ve gotta fly around. People are scared to death to fly over Iran. They’ll shoot you down left and right. This is a montage of Mike Wallace questions to Mahmoud Ahmadinejad that we put together just to illustrate the tone of the interview.

WALLACE: I couldn’t be happier for the privilege of sitting down with the president of Iran!
WALLACE: Were we wrong to go into Iraq?
WALLACE: What do you think of George Bush, as a man and as commander-in-chief of the so-called free world? What do you think of George W. Bush?
WALLACE: You despise the Zionists.
WALLACE: Why are they worried about your jacket? I think you look just fine. Are you a vain man? Let me assure you, you look your best.
WALLACE: What do you do for leisure?
WALLACE: I’m told that your aides want us to wind up our interview, but you kindly promised to answer my questions, and I still have just a few left.
RUSH: Okaaaaay. Hubba. Hubba. There you have it. He “really looked his best,” and that’s important, you know? Mahmoud looked his best. Jacket was cool, too. Yes.