Olmert Is What Happens When Liberals Get Power

RUSH: We just had a guy call, and I want to go into this in a little greater detail. A guy called and said, ‘Hey, this is a setup,’ and I know, folks, a lot of you think this way, and it’s understandable why. Well, this is just the first obvious step that everybody is always being ‘chicanerous,’ deceptive. ‘Yeah, we’ll sign onto this deal but what this will really allow us to do is let the other side kind of screw up so the world will see the other side screw up, and that will give us license to go out and kick butt.’ All well and good except that’s been the pattern the last 30 years in this regime, even longer than that. How do you go through a period of time where you’ve got Yasser Arafat screwing everybody with the Oslo accords or any of these other militant Islamic leaders, what more evidence and proof does anybody need here that resolutions are not abided by, that ceasefires are irrelevant?

What more is needed? Now, if there’s anything more to this, it is this. It is that the side of right, the side of the good guys, ‘This ain’t going so hot and we gotta shut it down,’ and I think that may be one of the factors here. But let’s just take what the guy said. The caller

Let me share with you again from Caroline Glick, who is really good on this stuff, I think. She’s a columnist at the Jerusalem Post. This is from August the 13th. ‘While the resolution was not passed under Chapter 7 of the UN Charter and so does not have the authority of law, in practice it makes it all but impossible for Israel to defend itself against Hizbullah aggression without being exposed to international condemnation on an unprecedented scale.’ Now, I know that those are just words to you right now, but think about the way it was written, is the point. It was written in such a way that it’s impossible for Israel to defend itself against Hezbollah aggression, and Kofi Annan sent the letter over the weekend to the Israelis, saying: Don’t you dare respond. Don’t you dare! You can defend yourself or something, but don’t you dare mount a new offensive. Don’t you dare do it!

So Kofi Annan is the general, if you will, in charge of all of this now. That’s why every picture you see of him, he’s smiling and grinning from ear to ear because he’s el comandante when it comes to all this. So the resolution, even though it allows for the fact that the Hezbos might violate it, Israel has got its hands tied in terms of how much it can do. ‘This is the case first of all because the resolution places responsibility for determining compliance in the hands of UN Secretary-General Kofi Annan. Annan has distinguished himself as a man capable only of condemning Israel for its acts of self-defense while ignoring the fact that in attacking Israel, its enemies are guilty of war crimes. 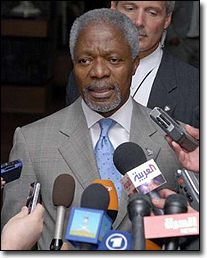 ‘By empowering Annan to evaluate compliance, the resolution all but ensures that Hizbullah will not be forced to disarm and that Israel will be forced to give up the right to defend itself. The resolution makes absolutely no mention of either Syria or Iran, without whose support Hizbullah could neither exist nor wage an illegal war against Israel. In so ignoring Hizbullah’s sponsors, it ignores the regional aspect of the current war and sends the message to these two states that they may continue to equip terrorist armies in Lebanon, the Palestinian Authority and Iraq with the latest weaponry without paying a price for their aggression,’ and that’s what I mean when I say that everybody is making the mistake in just looking at this as an episodic event in a series of other episodic events.

For some reason, the leaders of the western world right now just don’t have the will or the desire to go to the source of all these problems. Hezbollah is just a… What do you want to call them? Call them a pimple; call them an outgrowth. Syria, too, but Syria’s a little bit more prominent because it’s a state — although, hell, the Hezbos have essentially been proclaimed a state, as it is. They’re being negotiated with as a state rather than as a terrorist organization. So nobody wants to go after Iran right now. Nobody wants to do it. It’s a question I’ve been asking, do you want to do it now or do you want to wait ’til they have nukes, or do you not want to do it at all and we’ll just continue to look at things in an episodic context?

Also: ‘The resolution presents Hizbullah with a clear diplomatic victory by placing their erroneous claim of Lebanese sovereignty over the Shaba Farms, or Mount Dov – a vast area on the Golan Heights that separates the Syrian Golan from the Upper Galilee and is disputed between Israel and Syria – on the negotiating table. In doing so, the resolution rewards Hizbullah’s aggression by giving international legitimacy to its demand for territorial aggrandizement via acts of aggression, in contravention of the laws of nations.’ Now, when you cut to the chase of this, there are a lot of ‘sources in Washington’ who are saying, at least to Caroline Glick of the Jerusalem Post, ‘that the US decision to seek a cease-fire was the result of Israel’s amateurish bungling of the first three weeks of the war. The Bush administration, they argued, was being blamed for the Olmert government’s incompetence and so preferred to cut its losses and sue for a cease-fire.

‘There is no doubt much truth to this assertion. The government’s prosecution of this war has been unforgivably inept. At the same time it should be noted that the short-term political gain accrued by the US by forging the cease-fire agreement will come back to haunt the US, Israel and all forces fighting the forces of global jihad in the coming weeks and months. By handing a victory to Hizbullah, the resolution strengthens the belief of millions of supporters of jihad throughout the world that their side is winning and that they should redouble efforts to achieve their objectives of destroying Israel and running the US out of the Middle East.’

That kind of sums it up for me in a nutshell as to what this outcome signifies. Call it a loss, whatever you want to, victory, I mean some people are going to spin this as a victory. Some people will portray it as the loss that it is. But you know how momentum is and you know how attitude is, and the more positive your attitude, the more energetic your pursuit of your objective is going to be, and clearly that is on the side of the jihadists right now because, you know, the problem with Olmert is he may be a nice guy, but he’s not a general. He’s a lawyer, and he’s a lib, and he doesn’t come from the great generations of previous Israeli prime ministers who led the country into battle.

You know, it’s not entirely his fault. I’ll share you with. I went to Israel in 1993 and I met a bunch of people. I met with Yitzhak Rabin. At the time the Oslo accords were being negotiated and nobody knew that that was happening except it was known that they were negotiating for peace. This has been going on my whole life, and before 1993 and before the early nineties, the Israelis had always been very reluctant about negotiating with these people, and Rabin was the first to actually seem to welcome it and think that it held promise, and I asked him, ‘Why? I haven’t heard any change from the mouths of your enemies. I haven’t heard them renounce their desire to march Israel into the Mediterranean, to exterminate all Jews from this region. I haven’t heard any change. What’s different?’ 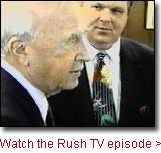 I said, “Is it generational? You’re a grandfather, you don’t want your grandkids to grow up with their whole lives being spent at war?” and he denied that, said it was just time. There was “a legitimate opportunity here for peace” and so forth, and keep in mind, this is 13 years ago, and it gave us the Oslo accords. I actually do think it’s generational. I think part of it is generational. You can’t possibly enjoy this as a human being. You can’t enjoy your whole life being spent at war surrounded by people who want to wipe you out. You just can’t enjoy that and you can’t want it for your kids and you can’t want it for your grandkids. What you want to do is eliminate the threat and that’s what gives you peace. That’s what’s so puzzling about this. But, hey, Israel has its share of libs, folks, and they elected one, Ehud Olmert, and this is what you get. This is a little microcosm here of what you’re going to get. You’re going to get incompetence, lack of certitude, lack of planning, handcuffing the military, blah, blah, blah, blah. I mean, liberals are liberals, and there are lessons every day when you watch and observe them.
BREAK TRANSCRIPT
RUSH: One more aspect of our previous call, then we’ll get to some more calls. The guy said, once we have the ceasefire violated, once the Hezbos hit the Israelis, then us, and then the Brits and then Europeans will all join forces and go out and get Iran. Can I give you a sobering thought, ladies and gentlemen, when it comes to the Europeans and the Brits joining forces with us against Iran? What do you think the birth rate of Muslims in Europe is and in Great Britain versus Europeans and the British? I think it is two or three to one, plus you count the immigration. Who in Europe is exactly going to be our friends when it comes time to go after Iran? The arithmetic is pretty simple. Two times two is four. Eight times eight is 64, becomes a geometric progression.
The birth rate of Europeans versus Muslims in European countries leads to substantial voting blocs and militia blocks in European nations. The longer this goes, I wouldn’t count on the historical population construct of Europe and the UK being what you think it is — and then this, this from the New York Times today. “The number of immigrants living in American households rose 16% over the last five years, fueled by largely recent arrivals from Mexico, this according to fresh data released by the Census Bureau. Increasingly, immigrants are bypassing the traditional gateway states like California and New York and settling directly in parts of the country that until recent saw little of such activity, regions like the upper Midwest, New England, and the Rocky Mountain states.” It’s an incredible number. What is the percentage? The percentage increase is stunning here.