RUSH: Let me tell you this quick story, and I’m going to have more on this next week after I see the DVD. I have not had a chance to watch the DVD. A friend of mine out in California has produced and filmed — I think it’s a two-part mini-series on 9/11 that ABC is going to run in prime-time over two nights, close to or on 9/11. It’s sort of surprising that ABC’s picked it up, to me. I’ve had a lot of people tell me about it, my friends told me about it, but I hate to admit this, I don’t have a DVD player at my fashionable upper east side apartment. I’m here so little, I just haven’t upgraded it, and I can’t hear audio from computer speakers and so forth, so I can’t watch it that way. So I’m not going to be able to watch this thing and tell you people about it ’til I get back home next week. 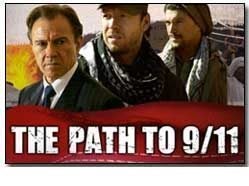 I gotta go to Missouri this weekend for family Labor Day. We always get together and don’t work on Labor Day. We just have parties. So I won’t be able to see it ’til next week. But the program was taken to Washington I think last week, and it was shown to a specially selected group of people, including Democrats and Republicans, former administration officials, blah, blah, blah, blah, blah. And from what I have been told, the film really zeros in on the shortcomings of the Clinton administration in doing anything about militant Islamofascism or terrorism during its administration. It cites failures of Bill Clinton and Madeleine Albright and Sandy Burglar. And apparently there were a bunch of Clintonoids in the audience who just went nuts during this screening, among them Richard Ben-Veniste, and Ben-Veniste confronted — Michael Barone was there, too, who loved it. Richard Ben-Veniste was there and confronted my friend — his first name is Cyrus, who produced this thing, and from what I’m told it got really vicious with Ben-Veniste being very aggressive and my friend held his ground, and it is suspected by people who were there that there will begin soon an all-out campaign to discredit this film before anybody sees it. I’m not surprised why Clintonoids would want to discredit this.
This is not the kind of thing they have to deal with. They don’t have to deal with the criticism of their failures. Their failures are never chronicled. The no-failures of the Bush administration are created in the Drive-By Media and by the American left, the Democratic Party. They’re fabricated out of whole cloth and made up and then broadcast as events; and then poll data is taken on these so-called failures of the Bush administration. I’m not kidding. By now, I wonder how many Americans think that Katrina is actually George Bush’s fault, that what happened, the damage is George Bush’s fault, not just the aftermath, not just that the clean up has taken this long. The fact that the state government and local government got no blame whatsoever, it’s all Bush’s fault, Bush may as well have gone down there and lit the fire to the city himself.

Now, they tried this during Reagan. Reagan didn’t care about the homeless. They had little cartoons and pictures of Reagan sneaking out of the White House at night on cold winter nights and going to some homeless camp, Mitch Schneider’s place, stealing some homeless guy’s pork and beans, going back to the White House, opening the can, heating it up and eating and rubbing his stomach as though he just enjoyed stealing from the homeless. It’s a typical tack taken by the left but apparently this piece is really, really hard. Ben-Veniste and some of these people that were there just couldn’t stand it, and it is expected that there will be an attempt to quash it, discredit it in any number of ways, organized campaign, backed by money, maybe even television ads. But the people that are 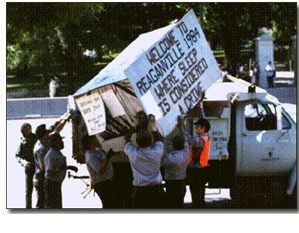 on our side who were also there, said, ah, this is just fabulous, it’s fantastic. So I’m eager to see it, and I feel really embarrassed to tell you I can’t watch it while I am here. I mean, you can’t — (interruption) H.R. says now we know what to get you for Christmas.
Look it, my TV doesn’t even work. I mean, it’s a nineteen ninety — no, it’s a projection TV, it’s about a four or five foot screen, and the projector is behind the wall, and it just doesn’t work anymore. I’m here less than, you know, 15 working days a year. I just haven’t bothered to replace it or fix it up. I mean, I put this room together before there was DVD — there’s a laser disk player in there, but yippee. Laser disk, those things belong in the Smithsonian now. So I will wait ’til I get back to my state-of-the-art — I guess I could take it with me to Missouri and watch it with the gang there. Yeah, I could watch it on the plane, except if it’s four hours — see, I don’t know how long it is. It’s two DVDs. That’s right, watch it on the plane. I hadn’t even thought of that. Good idea, Maimone, you get a raise. I’ll watch it on the plane. I hope to be flying back home tomorrow afternoon after I finish a super-secret project and then I gotta go to Missouri on Friday afternoon. But it depends. I mean, I had to airline the flight crew home on Monday to prepare their homes for this nonexistent rainstorm. We shut down half the state of Florida for a thunderstorm. At any rate, so they’ve gotta get back up here or I’m stuck and won’t be able to get out of here ’til Friday sometime. Ah, it will all work out.