RUSH: Here’s Ed in Brunswick, Georgia. Ed, I’m glad you waited, sir. Welcome to the program.
CALLER: A real privilege to talk to you, Rush.
RUSH: Well, thank you, sir.
CALLER: This former resident of Marin County and Palm Beach County greets you. 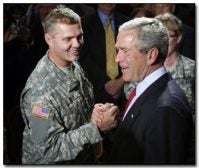 RUSH: Wow. You tried both places and scrammed, huh?
CALLER: (Laughing) Rush, my son is in the military, he’s in the Army, and he’s in Iraq right now, and he listens to you every chance he gets. So my greetings to the noblest class of Americans in the United States military and to him in particular.
RUSH: Thank you. Agree a hundred percent.
CALLER: Now, my point is that I think these people are running scared over this ABC movie because it may just focus enough people to the right place, and that is that Al-Qaeda is the enemy, not the Bush administration, and they’re terrified that the media is now being used as a weapon or could be used as a weapon to prove that point.
RUSH: That actually is an excellent point because much of the Drive-By Media and the American left, Democratic Party, have been doing their best to convince people that we live in a pre-9/11 world. 9/11 was an episode, it was irrelevant, it’s mostly Bush’s fault, it can’t happen again. They have been against showing all of these other movies, United 93, especially the Upper West Side Manhattanites have been opposed to any of this sort of thing, and I think you’re right, because this is five hours of intensity, and it will focus and remind — this is why I’ve always said, we need to see these pictures frequently because the American people’s psyche is determined by pictures now. Their attitudes and largely their opinions, except the people that listen to this radio show, don’t need picture because we paint them for them so well here.

CALLER: Don’t these people on the left coast understand that if Al-Qaeda had its way, they would be the first target?
RUSH: Oh, no. No, seriously. They think they’re the only ones that could reason with Al-Qaeda. They could talk to them, make deal with them and show them America really means them no harm. No, not kidding you.
CALLER: These people’s lives are a personal train wreck, and yet they’re out there telling us how we should vote and how we should behave. They don’t even know their own ZIP code or the price of a gallon of milk.
RUSH: (Laughing.) Or the price.
CALLER: Yeah, exactly. It’s just a scream, and I think they’re terrified of that, Rush. I think they think that, you know, this docudrama or whatever you want to call it, which, by the way, I will watch if ABC airs it in its entirety, and if they cut it, I won’t. But I think that they’re scared to death that the Michael Moore medium is now being used to focus who the real enemy is in this country and what we should and should not do about it.
RUSH: That is an excellent point, because they have spent the last three years trying to portray Bush as the enemy, the real terrorist, the reason there are more terrorists. And it’s clear when you watch this, you can’t conclude anything other than all this happened before Bush became even a resident of Washington, before he was even in the White House. This happened when he was governor of Texas. To say that he caused all this is absurd, and it’s not to say that Clinton caused it.

These people did it themselves based on their own ideology and who they choose as their enemy and we’re it. But I think it’s an excellent point. I gotta give you a gold star on that one. Let me ask you something out there, Ed. Are you a subscriber to my website?
CALLER: No, sir. I’m not.
RUSH: Well, you are now — you use a computer?
CALLER: Oh yeah, all the time.
RUSH: Well, then we’re going to make you a comp subscriber. That is really a good point, one that I should have made myself and failed to come up with. You have embarrassed me here by being smarter than I on one little brief point here, but stand by and we’ll make you a comp member, get all the information to you that we need for that to happen. Limbaugh Letter, too.