Conspiracy Kook: 9/11 Was Inside Job

RUSH: Jeff in Philadelphia, you’re next. Great to have you on the EIB Network.
CALLER: Hi, Mr. Limbaugh, how are you?
RUSH: Fine, sir.
CALLER: Can I start off by saying, even though I’m calling you, I do not like you. I’m on the far left and I’m an Air America fan. And there’s two things. You know how intelligence operates in this country, and you know that the president, even if he appoints the CIA director, okay, they can be told to stand down by what is called Deep Intel who are connected with the establishment. If you read John Loftus’ book, The Secret War Against the Jews, he even talks about issues such as that. And also, you called the Democrats appeasers, correct? Hello?
RUSH: Worse than that. Yes, and worse.
CALLER: Well, there is no appeasement, and we can handle the defense of this country. But the reason that Democrats act the way they do is because they do believe, most of them, like myself, I’m part of the truth movement, I’m not a conspiracy theorist —
RUSH: No, of course not.
CALLER: — that 9/11 was an inside job.
RUSH: Yeah. 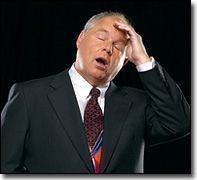 CALLER: You know, you never talked about the Project of the New American Century, although you know about it, and you know the lingo in there about a Pearl Harbor level event motivating the American public, and then you look at 9/11 itself. You never talk about Marvin Bush, do you? And you know his position within the trade towers and the airports. And you look at those pictures today on TV, those towers after the planes hit were imploded, and you know they were rigged months and months before. Isn’t it correct?
RUSH: No. I don’t know it. You’re putting words in my mouth.
CALLER: No, but you look at those towers —
RUSH: And, by the way, if it had happened, do you know how many people would have been in on it that would have had to have been shot, imprisoned, tortured, or eliminated? I figured it out. Maybe the people who rigged the World Trade Centers to be demolished like that were actually the people on Flight 93 which did not crash in the field —
CALLER: No.
RUSH: No, they’re down in the Canary Islands right now, and they’re all in prison.