RUSH: I’m really happy to introduce to you Secretary of State Condoleezza Rice, who joins us from Washington. The last time I spoke to you, Madam Secretary, was during the 2000 presidential campaign, so it’s long overdue, but welcome to the program here.
SECRETARY OF STATE RICE: Well, it’s great to be with you, Rush. I can’t believe it’s been that long.
RUSH: Time flies when you’re having a good, good time.
SECRETARY OF STATE RICE: (Laughs.) It does. It does.
RUSH: Look, I want to get straight to this because I know your time is limited. The press conference today the president had about the congressional legislation he wants, 45 Democrats opposed — I’m not trying to draw you into political questions here, rest assured — you’ve got the three Republicans here, McCain and Warner and Lindsey Graham joining the Democrats opposing this. Secretary Powell wrote Senator McCain a letter that McCain has publicized. You have responded in a letter to Senator Warner. What did you say? 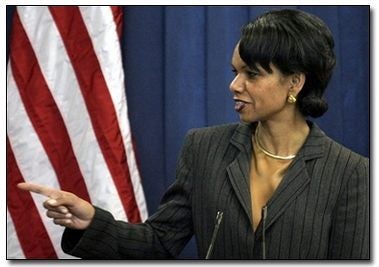 SECRETARY OF STATE RICE: Well, in fact I sent the letter before I had seen Secretary Powell’s letter. My letter simply stated the Department of State’s position, which is that the interpretation of a US treaty obligation through US law is something that we do frequently and all the time. We’re not trying to change what’s called Common Article 3. We’re not trying to weaken it. We just want our professionals to have clarity so that they know what is legal and what is not, and I have absolutely no problem defending what the president has asked the Congress to do when I go internationally. I think it only makes sense that you would not leave a very unclear standard like that of Common Article 3, which talks about “outrages on human dignity,” for instance, Rush. You don’t want to leave that to unaccountable prosecutors, for instance, internationally. You want US law to define that.
RUSH: Madam Secretary, people like me don’t understand the substance of this. We see pictures of people jumping out the World Trade Center on 9/11 this week. We remember the videotapes of the kind of treatment American and foreign hostages receive at the hands of our enemy when in their captivity. I don’t understand the effort on the part of those who oppose this in Congress to try to establish a moral equivalency between the way we treat prisoners and the way our enemy does, and to suggest that we can’t do something here because it might incite them to be even meaner to us. Could you help me and others like me to understand the common sense of opposing this? I can’t get my arms around it.
SECRETARY OF STATE RICE: Well, Rush, I have to say I don’t quite understand, either, why we would not give the professionals, our professionals a clear standard so that they know this they are obeying the law. These are people who take tremendous risks to try and defend us. They have made tremendous strides in getting information from people like Khalid Shaikh Mohammed who 9/11, from people like Ramzi Binalshibh who you saw on that videotape of Al-Qaeda just a few days ago crowing about September the 11th. They have made great strides in getting information from these people that have prevented other attacks, — and, by the way, not just prevented attacks here in the United States, but prevented attacks in other parts of the world, too. To have a piece of legislation that does not protect them and does not give them a clear legal standard, I think, is simply wrong.
RUSH: Do you find yourself in an uncomfortable circumstance what with Secretary Powell? Leaving aside the apparent lack of loyalty that exists in his letter, do you find it — like I have the New York Sun headline here: “Showdown Set Between Rice and Powell.” Do you think this is descending into something personal?
SECRETARY OF STATE RICE: No, no, I don’t see it that way. Colin Powell is a private citizen. He can have his views, and I think that’s the nature of our great democracy. He’s a well-respected private citizen. It’s my responsibility now to help defend the United States. It’s my responsibility now to defend American defend American policy abroad and to try through diplomacy to make us safer, and I’m quite confident that the United States can both get the information that it needs live up to our treaty obligations, and the legislation that the president has proposed does exactly that.

RUSH: At his press conference today, the president introduced something new, basically if I understand it right, the president says if he doesn’t get what he wants — if there’s not clarity, defining and specifying the vagaries and ambiguities of Common Article 3 he said — the program will not go forward. I interpreted that to mean he’ll scrap it. He’s not going to put our professionals, as you refer to them, in any kind of precarious circumstance, and if they don’t go along with what he wants he’ll scrap the whole program — and I assume that means the focus of attention on the lack of the program existing from that point forward will be on Congress.
SECRETARY OF STATE RICE: Well, I feel very strongly, as does the president, that these men and women who go out and do this difficult and dangerous work deserve clarity about the legal ground on which they’re standing. And I don’t think that you will get people who will actually participate in this program if you don’t get that kind of clarity. So you won’t have a program — and it would be unfortunate, because we have learned a lot from this program. We have prevented attacks. Rush, information is a long pole in the tent in the fight against terrorists. If you wait until a terrorist has committed his act, then 3,000 people die. What you want to do is to prevent them, and the only way that you can prevent them is to know what they’re thinking, to know what they’re planning, to know what they’re plotting, and this program has been essential in helping us to find that out.
RUSH: Madam Secretary, the average American understands this. It’s not complicated, and that’s why so many people don’t understand the actions of those in the president’s party who are attempt to go halt this. They’re thinking there’s gotta be something behind the scenes that matters more than just the specifics of this. I’m not asking you to address that. I know your time is limited, and I have one more question for you — and I assure you I’m asking this solely from the position of wanting to learn and wanting to understand. I want to go back to the recent war between the Hezbollah and Israeli forces. It seems that when it comes to Israel and their fight against terrorists, ceasefires and resolutions are the rule of the day, even though they really haven’t worked in ceasing these hostilities and bringing about peace. They just bring interruptions to it. Yet when we are fighting terrorists, we don’t tell ourselves to ceasefire and negotiate with them. What is it about the paradigm of the Middle East that requires the fight against terrorism there be fought differently than the way we’re fighting it against us? 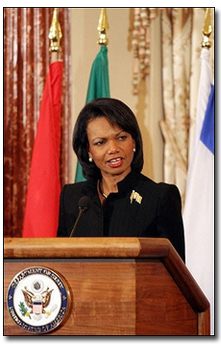 SECRETARY OF STATE RICE: Well, I would think of it a little differently, Rush. What you have there is a Lebanese government that wants to fight terror and is the beginning of a democratic government that could be actually a partner for Israel in fighting terror, and so the ceasefire was really with the Lebanese government, and now we’re trying to help the Lebanese government deal with the effects of a Hezbollah that launched that attack without Lebanon even knowing. I think of it the following way. We are fighting terror in Iraq, but we’re doing it an Iraqi government. We are fighting terror in Afghanistan, and we’re doing it with an Afghan government. So the way to think about what’s happening in Lebanon is that we’re going to fight terror but we need to do it a Lebanese government that is devoted to fighting terror. So I think from our point of view, there isn’t any difference. No terrorist can be supported or understood or negotiated with. What you can do is to find moderate governments, moderate leaders in those countries that are suffering from terrorism themselves and enlist them in the fight to help defeat terrorists.
RUSH: Is Lebanon really serious about this? I mean, if the Hezbollah group was able to attack without even the government of Lebanon knowing it, then what good does a ceasefire with the government of Lebanon do?
SECRETARY OF STATE RICE: Well, you have to strengthen that government. It’s a weak government, but it is getting stronger. It’s finally deployed its military forces throughout its whole country for the first times in more than three decades, and this is a government that came to power when the extremists assassinated the reformist prime minister of Lebanon, Rafiq Hariri, and so this is a government that comes from the right set of values and the right set of principles. It’s just not very strong. We’re trying to help build it up, build up its security forces. But when we’ve done that in Lebanon and in Iraq and in Afghanistan — and indeed if we can find that kind of government in the Palestinian territories — having those strong moderate forces to help you fight terror, indigenous forces to help you fight terrorists is extremely important.
RUSH: Okay, so the theory is that terrorists will gravitate to areas where there are no states, where there are no governments —
SECRETARY OF STATE RICE: Right
RUSH: — like they did Afghanistan and Somalia.

SECRETARY OF STATE RICE: Exactly, and so you have to build up governments that can prevent that from happening, and it’s hard work.
RUSH: I hope they’re allied with us.
SECRETARY OF STATE RICE: These are governments that are allied with us. It’s hard work. They’re sacrificing, too. There was an attempt on the life of the deputy interior minister of Lebanon just a few days ago. So they’re sacrificing, too. But these are really good partners. We just have to build them up and help them to fight the terrorists in their midst.
RUSH: Before you go, are there days you wish that you could have become the commissioner of the National Football League?
SECRETARY OF STATE RICE: (Laughing.)
RUSH: I love it that you’re a football fan.
SECRETARY OF STATE RICE: Oh, yes. Of course there are days I wish I could — no, look, I love what I’m doing, and I’m really lucky to be here at this particular point in time but at some point I’m going to want to go to one of my first loves, which is sports.
RUSH: Well, let me tell you: there are a lot of Americans that are thrilled that you are there, too, because they understand the battle you have with a lot of career people in the state department who were there before the administration got there, and you bring a comforting salve too a lot of people by the way you conduct yourself and the office. Do you have a favorite NFL team? 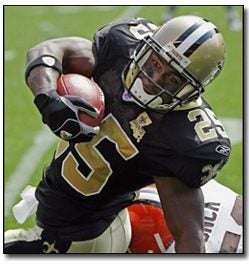