RUSH: Well, lots of exciting stuff going on out there today, folks. The latest from this whole controversy over the pope, and words. There are some things that happen that are simply propitious, and this is one of them. The pope utters words, he quotes an old emperor from many centuries ago, and now the Muslim world is going bonkers, rioting, killing a nun in Somalia, shooting her in the back while she was praying. These Muslim extremists, Islamofascists are proving everything that the pope’s words indicated. The New York Times had an editorial on Sunday that just totally misses the point, but, boy, is it expressive and illustrative. 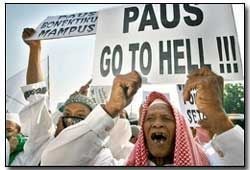 First off from Reuters, dateline Dubai. “An Iraqi militant group led by al Qaeda vowed a war against the ‘worshippers of the cross’ in response to a recent speech by Pope Benedict on Islam that sparked anger across the Muslim world. The statement was made in an Internet statement by the Mujahideen Shura Council, an umbrella group led by Iraq’s branch of Al-Qaeda, said, ‘We tell the worshipper of the cross (the Pope) that you and the West will be defeated, as is the case in Iraq, Afghanistan, Chechnya… We shall break the cross and spill the wine. … God will (help) Muslims to conquer Rome. … God enable us to slit their throats, and make their money and descendants the bounty of the mujahideen.” Yeah, this is a peaceful religion, there’s no question about it. The pope simply utters words. But guess who one of the staunchest allies of Al-Qaeda happened to be yesterday? Well, not Jacques Chirac. It was the New York Times.
The New York Times has an editorial entitled, The Pope’s Words. “There is more than enough religious anger in the world. So it is particularly disturbing that Pope Benedict XVI has insulted Muslims, quoting a 14th-century description of Islam as ‘evil and inhuman.’ Muslim leaders the world over have demanded apologies,” and the pope has apologized, and he keeps apologizing, and he’s apologizing even more. He ought to just be quiet. He’s not going to gain anything. These are opportunities. How long does it take for these rent-a-mobs to round up these people to get in front of AP and Reuters and UPI cameras to go out there and pose as an angry mob, thereby making sure these pictures show up all over the world? “Muslim leaders the world over have demanded apologies and threatened to recall their ambassadors from the Vatican, warning that the pope?s words dangerously reinforce a false and biased view of Islam. For many Muslims, holy war – jihad – is a spiritual struggle, and not a call to violence.” (Laughing) That may be, but there’s still a whole heck of a lot of them to whom it is more than a spiritual struggle. It is an actual struggle that has led to a world war.

You know, the utter denial of a reality that is… you have to close your eyes and blindfold yourself to miss this. “A doctrinal conservative, his greatest fear appears to be the loss of a uniform Catholic identity, not exactly the best jumping-off point for tolerance or interfaith dialogue.” All right, if the New York Times is upset at the pope’s words, demanding he apologize for quoting words from centuries ago that offended Muslims, maybe we can strike a deal. You know, I like to offer solutions on this program. Maybe what ought to happen is that if we get the New York Times to apologize to Karl Rove and Scooter Libby and a number of other people they have impugned and maligned and offended with their printed words and their editorializing, then maybe we can go to the pope for one more apology. Maybe he wouldn’t mind adding one more to the list that he has already made. 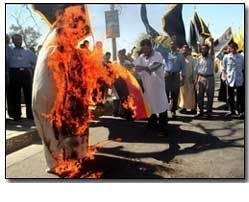 If you read this whole editorial and I haven’t bothered to read the whole thing to you, but what becomes obvious here, ladies and gentlemen, is that the people at the New York Times and the libs view religion in a totally different way from anybody else. That’s the only conclusion that you can come to here. Religion is simply a device whereby practitioners are trying to make themselves feel good in an otherwise screwy and out of control world. It’s like the religion of the Church of Oprah. It’s like the religion of the church of environmentalism or the religion of the church of animal rights or feminism. It’s all designed to make the practitioner feel better about his own world view, but it has no depth, it has no foundation, and it has no meaning. You know, these people forget that we are dealing with evil. They don’t even acknowledge it. They haven’t even reached the point where they could forget it. They don’t even acknowledge it. And real religion, whatever its problems may be, real religion is all about fighting the dark side and fighting evil and fighting sin, is it not?
That’s the purpose, and to help provide faith for answers to questions that we are capable of asking but that we will never be able to answer. The New York Times says, you know, we need love. Jackie DeShannon: (singing) “What the world needs now is love, sweet love.” That’s not what’s needed. I mean, the pope has practically bowed down on his hands and knees, “I’m sorry, I didn’t mean to offend anybody, they weren’t even my words, please let me go, leave me alone.” And it’s still not enough. You can’t apologize to these people. What is, I think, necessary here is a muscular and forceful, unflinching devotion to God that looks evil in the eye and calls it by it’s true name. I think, in large part, much of the population of this country indeed feels that way about it. The New York Times, which will fight to the death for their own free speech rights, is predictably hypocritical in suggesting the pope was wrong for exercising his. But I want to go back to this whole point that, you know, they demand the pope apologize for offending and maligning and so forth and so on.
Boy, I’ll tell you, if anybody needs to be at the front of that line it is the editorial writers and even some of the reporters at the New York Times who have sought out and tried to destroy numerous human beings in and out of the Bush administration in Washington simply because they are in the Bush administration or support the Bush administration, simply because they are conservatives. Notice the restraints, the constraints, and the shackles the New York Times argues for everyone else, are shackles that they would never, ever dream of allowing to be placed on themselves, even if those shackles were the shackles of fairness and responsibility.

NEW YORK TIMES:
September 16, 2006
Editorial
The Pope?s Words
There is more than enough religious anger in the world. So it is particularly disturbing that Pope Benedict XVI has insulted Muslims, quoting a 14th-century description of Islam as ?evil and inhuman.?
In the most provocative part of a speech this week on ?faith and reason,? the pontiff recounted a conversation between an ?erudite? Byzantine Christian emperor and a ?learned? Muslim Persian circa 1391. The pope quoted the emperor saying, ?Show me just what Muhammad brought that was new, and there you will find things only evil and inhuman, such as his command to spread by the sword the faith he preached.?
Muslim leaders the world over have demanded apologies and threatened to recall their ambassadors from the Vatican, warning that the pope?s words dangerously reinforce a false and biased view of Islam. For many Muslims, holy war ? jihad ? is a spiritual struggle, and not a call to violence. And they denounce its perversion by extremists, who use jihad to justify murder and terrorism.
The Vatican issued a statement saying that Benedict meant no offense and in fact desired dialogue. But this is not the first time the pope has fomented discord between Christians and Muslims.
In 2004 when he was still the Vatican?s top theologian, he spoke out against Turkey?s joining the European Union, because Turkey, as a Muslim country was ?in permanent contrast to Europe.?
A doctrinal conservative, his greatest fear appears to be the loss of a uniform Catholic identity, not exactly the best jumping-off point for tolerance or interfaith dialogue.
The world listens carefully to the words of any pope. And it is tragic and dangerous when one sows pain, either deliberately or carelessly. He needs to offer a deep and persuasive apology, demonstrating that words can also heal.
Home
World U.S. N.Y. / Region Business Technology Science Health Sports Opinion Arts Style Travel Jobs Real Estate Automobiles Back to Top
Copyright 2006 The New York Times Company