When Will We Say “Enough Is Enough”?

RUSH: Well, isn’t this great? Isn’t this just fabulous? The blowhards at the UN have totally screwed everything up here. The president’s supposed to speak at 11:30 and these clowns still flapping their gums about whatever. I’m not even watching it. We’re told that every speaker at the UN gets a maximum of 15 minutes for their speech. If that’s the case, we’ll take it when the president starts. We got an attempted coup going on over in Thailand. We’ve got a mystery object shadowing the space shuttle in the same orbit. The return delayed until at least Thursday when they figure out what it is. Plus there’s weather problems here down here at Cape Canaveral, waiting for a cold front to go through. This time of year when a cold front goes through down here, the temperature drops from 90 to 88.

Greetings, friends, and welcome. Rush Limbaugh, the Excellence in Broadcasting Network. Let me ask you a question. Are you really, I mean really starting to get bothered by all of this insane Islamofascist stuff? This rioting all over the world, the promise of death threats and slitting of throats of the pope and all the infidels? Are you getting sick and tired of everybody else in the world acting frightened and scared and reaching out and wanting to apologize, oh, we’re sorry for offending you and so forth? If you’re mad like I am about this, do you get even angrier when you listen to McCain and Lindsey Graham and their foolishness on all this which just makes it worse? 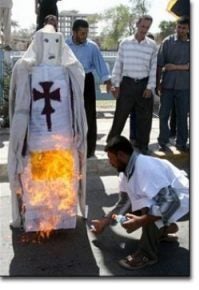 I mean, here’s my question about all this. When are we, as a nation, when is the rest of the peace-loving world going to get mad enough at these savages, militant Islamofascists rioting, threatening death and slitting throats, and when’s the world going to stop capitulating? We are told that there’s so much hate for us out there by our own media. I’ll tell you what, folks, I have had it. I am sick and tired of my country being portrayed as the damned enemy out there, and I’m sick and tired of a bunch of Americans acting like they think it, too, and that we’ve got to revise policy and start apologizing and so forth. A bunch of stupid idiot Americans are joining this chorus because they think there’s so much hate for us out there, including in the worldwide media, that our guilt makes everybody want to apologize all the darn time. Well, screw it. You know, and a reckoning should be coming any time soon. I’m this close to exploding this morning. I’ve really had it. I realize some of what’s going on here is that the Drive-By Media and the Democratic Party is trying to create a bunch of chaos out there, because let’s be honest about something, you’ve seen the news today about the president’s approval numbers are at 44%, USA Today, and you have seen gasoline prices coming down, and you just know that the Democrats and the libs are beside themselves.

This is not what the election season was supposed to be. Their post-Labor Day election season was supposed to be an all-out assault and the country was supposed to be gravitating to them and there was supposed to be massive love and adoration for people like John Kerry, who were it not for his varicose veins, would be totally colorless, and massive love for Howard Dean and massive love for whoever the hell else out there they advance as so-called leaders, spiritual, real, or otherwise. There’s a lot of chaos being created in the media worldwide. Now we’ve got this abject, insane lunatic, Mahmoud Ahmadinejad, parading all over New York and he’s not going to go to the big luncheon today because they’re going to be serving adult beverages. Well, Bush is a teetotaler, too, but he’s going to go, and the Drive-By Media is just breathlessly waiting for an encounter, because to the Drive-By Media and the Democratic Party do you know who the more moral man is of the two? Ahmadinejad! They can’t wait for a confrontation. They want Ahmadinejad to tell Bush what it’s like and what it really is, and that frosts me.

It frosts me more than I can tell you. A man who threatens to nuke Israel, a man who is an obvious anti-Semite, a mass murderer, a sponsor of terrorism worldwide, and Americans think that Bush ought to give this guy the time of day, that we ought to sit down and talk to this guy. All that’s going to do is elevate him to a status he doesn’t deserve, and that’s exactly what Americans — this is what frosts me — Americans want to happen. They want our president belittled and impugned in the eyes of the world up next to some puppet of some deranged ayatollahs led by the grand mufti, ayatollah, whatever they call themselves, Ali Khamenei. And we sit here and we quake in our boots. I’ll guarantee you what’s going to happen tonight when you tune into certain cable networks. After the president does make his speech today, and Mahmoud Ahmadinejad makes his speech today, you’re going to see side by side photos tonight, side by side video, as though the two men are equal in stature around the world and whatever it is that Ahmadinejad says, we are supposed to give equal weight and gravity to what the president of the United States says.

So certain cable networks tonight will do the A-B, side-by-side comparison with in-depth analysis, and there will be the usual ripping of President Bush for insulting this great man, who only wants peace in the world. And, of course, we’re not the ones who want peace. We are the ones who are the savages. We’re the ones who want to wipe out anybody who disagrees with us. We’re the ones that want to torture everybody, put them in prison at Club Gitmo and after we feed them the fillet of fish and after we let them play soccer and basketball on the soccer fields and the courts that we’ve built for them, after we let ’em control the temperatures in their own suites, as opposed to cells, then somehow we want to torture them, find out what it is they plan on doing to us next. In the meantime, militant Islamists the world over are rioting, and the world says, “You know, what do we need to do to stop making them so mad?” 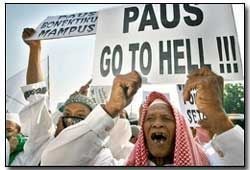 When are we going to say enough? When are we going to say enough is enough? We’re not the ones beheading people. We are not the savages. Hell, you’ve got Madonna, who — decency prevents me from telling you exactly what I think of her — is going to portray her own crucifixion on a cross during a concert on NBC. NBC says, ah, no big deal. All right, what if a major American network decided to portray some sort of similar thing with the prophet Mohammed? What do you think would happen to the GE building at 30 Rockefeller Center in Manhattan? Are we going to see Christians rioting in the streets? Are we going to see Christians beheading, blowing up the GE building, rioting in the streets, threatening death to the people that run NBC? No, of course, we’re not going to see any of that. Now, the bottom line is that all of this is going to backfire, but it is tough to live through. It is tough to watch this, because this hate and this disrespect and this cowardice is being led by Americans, certain Americans, and you know what political party they’re in.