RUSH: We’ll have some audio sound bites of Clinton associates, Carville and ‘The Forehead’ defending what Clinton did on Fox News Sunday. You know, I don’t know if they like what they’re getting, what they bargained for, but this video is and it’s continually being played, and I don’t care how you look at this, as Snerdley said to me during the break: ‘You know what, it could well be that one man, in 20 minutes, has done what the Democrats took a whole auditorium full of people in four hours to do in 2002. Bill Clinton may have provided the Democrats’ Wellstone Memorial in one interview on Fox News Sunday this past weekend.’ 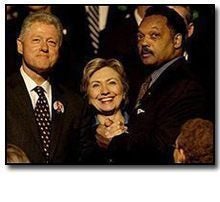 RUSH: To the audio sound bites, Bill Schneider last night on CNN reported this. (Laughing.) Get this.

SCHNEIDER: President Clinton is trying to rally voters behind Democrats on the terrorism issue by defending his record and arguing that Democrats will implement the 9/11 Commission’s recommendations. Is Mr. Clinton a good spokesman for his party? Apparently! Sixty percent of Americans express a favorable opinion of the former president.

RUSH: They went out and took a poll at CNN! (Laughing.) Clinton’s approval is still at 60%. When did they do this poll? I mean he shows up on the air on Sunday; they got the poll results back Monday night? Now moving on to the Today Show, new hostette Meredith Vieira interviewing James Carville and The Forehead. Vieira says: ‘James, was this an example of genuine outrage on the part of the president? Had Wallace made struck a chord with him, hit a nerve with him, or was it pure calculation, maybe a combination of all three?’

CARVILLE: It was not in a vacuum that we had the Disney fiction where they made up facts [sic] and, you know, from some Rush Limbaugh guy who and tried to send it out to school children.

CARVILLE: You know what? And Democrats are just tired of it. And he — yes, we’re sick the double standard. We’re stick of the fact that — that — that the media always asks one thing or another they’ll never ask the Bush administration another, and, you know what? I’m glad he did it. I think people around the country are saying, ‘We don’t have to live under this regime anymore, where there’s a blatant double standard.’

RUSH: This (Laughing.) James, old buddy, this is a nice try, but when you start talking about how the media gives the Bush administration an unfair shake, my friend, anybody with half a brain in this country knows that that is not true. (Laughing.) Democrats are tired of it? You know, you guys really need to ask yourself: This show on Sunday showed you. I’m telling you, he’s got a good indication here of just what would happen if the Drive-By Media weren’t there to prop up this phony baloney, plastic banana, good-time rock ‘n’ roller “legacy” of a former president. Then Vieira says to the Forehead, “Well, you guys have argued for a long time. I mean, you’ve been hard on your own party said they need to get a backbone do you think in a way Clinton was giving this party a back upon when you’re accused of not being tough on terror you’ve got to speak up?”
&lt;a href=”/home/eibessential/partisan_dems.member.html#0006″> 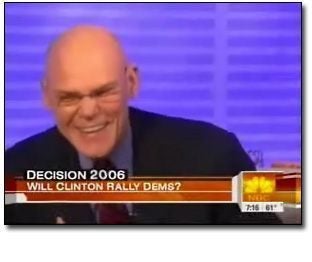 &lt;/a>BEGALA: The good. Dr. Clinton gave us a spinal transplant on Sunday.
CARVILLE: Yessa.
BEGALA: Finally, what Democrats have needed for a long time. They should have done this in the ’02 elections. They should have done it in the ’04 elections. Stand up and say, “The emperor has no clothes. George W. Bush has not kept you safe, America. He has not –“
RUSH: Stop the tape! What else are they saying, Forehead? They’ve been saying this for three years. It’s very easy to stand up and talk tough on terror but if you aren’t, it’s really hard to do — and the Democrats aren’t? What do you mean? You’ve got your own leader in their saying you’re going to pull the troops out and redeploy them to Okinawa! Jack Murtha, and he’s been You guys may want to try to fool everybody else and think that there’s a way to refute this soft-on-terror business.
You guys come up with the Al-Qaeda Bill of Rights. You guys got Senator Durbin out there comparing American interrogators to the gulags of the Soviet Union and the Nazis and Pol Pot. Well, come on! This stuff is not happening in a vacuum. You guys are just denying reality. This is real simple. If the Democrats had a backbone, it would be on display If you need a “backbone transplant,” it means you don’t have one! If Bill Clinton went out there, Forehead, “good Dr. Clinton” gave you a spinal transplant, it means If you did have one it would be obvious to everybody. Besides, Clinton is not into those kinds of transplants, I don’t think.