Are Liberals Truly Offended by Foley? 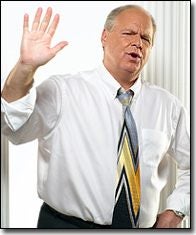 RUSH: I have to admit, my friends, I’m a little confused about certain aspects of the situation here involving Mark Foley and the page. Now, the school system, the public school system, has since the late eighties been teaching us that kids are going to have sex, we can’t stop ’em, it’s not our business to stop ’em. I mean, we’ve gone so far as teaching them to use condoms with bananas, or in some cases peanuts, cucumbers, but peanuts, too. You have to give them all life possibilities out there. And we had parents out on Long Island who are inviting their kids to have their boyfriend or girlfriend spend the night at the house because it would be cleaner and safer than if they were conjugating in the backseat of the family sedan. They went so far as to say we might even put a pack of cigarettes on the nightstand so that you can have a smoke after you have sex. Now I realize that that’s sex among teenagers, but the public education sex ed. program does not say that it’s wrong. You start talking abstinence to them, and they go nuts. Yeah, easy for you to say. We can’t stop these kids, so we gave ’em condoms to encourage the risky behavior.

Now, the liberals also tell us that sex and gender issues are just lifestyles, not choices. Maybe choices in the case of sex changes like the chopadickoffame and the adadictomy, but these are just lifestyle things, gender and so forth, we’re not to condemn. Any two people can love each other, any four people can love each other. You can define your family however you want, including your animal or animals. This we have been taught by the tolerant left among us. Kids can have sex, too. Not with somebody just in their age-group, alternative lifestyles, but not if the person is sexually active but younger, apparently. So we find here that there are limits. There are things that will offend liberals. Or are there? Because I continue to ask, are they really offended by this? How many of them wish they were in on the action?

Gary Studds’s person was 17 years old, Barney Frank, Stephen Gobie was running a little male prostitution ring out of Barney’s basement, and Barney didn’t know about it, he said. He arranged, I think he got 33 parking tickets fixed so that the visitors could park right there in front of Barney’s pad. But I don’t believe that they find what Foley did repugnant. They have defended it too often when it has been discovered to have taken place amongst their ranks. Look it, if they want to play the hypocrisy game, which they are doing, and that’s what they think is the strong suit that they have, sort of like the ace-in-the-hole, then we can play the hypocrisy game as well here on the EIB Network.