RUSH: Stand by audio sound bites nine, ten, and 11. I don’t know how many of you have seen this. CNN is airing video footage that is disgusting. It’s terrorist propaganda, essentially. It is videotape which shows snipers in Iraq killing American servicemen. Now, we can’t see the video of 9/11, because we don’t have the mental toughness. “It’s too soon. It’s too traumatic.” We can’t see that again on the news. We can’t see pictures of Americans, innocent Americans jumping from the higher floors of the World Trade Center, committing suicide to avoid burning to death.
No, no, no, we can’t see that, but we can see videotape on CNN of US soldiers being shot by snipers in Iraq. Now, CNN’s not entirely insensitive. They do fade to black before the moment of impact when the soldier dies. I wonder if terrorists were taking sniper type potshots at journalists running around, CNN would find that newsworthy. “A CNN executive said Thursday the network’s effort to present the unvarnished truth.” Let’s face it, CNN, the “unvarnished truth” to you is not the unvarnished truth of reality. The unvarnished truth that is CNN’s is that America sucks, that America is to blame, America deserves to lose. 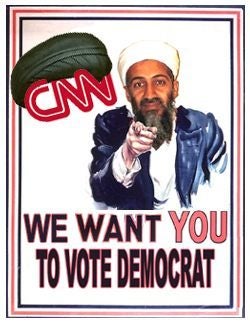 We have no business being where we are. This stuff is happening because we brought it on ourselves, we deserve for it to happen. The idea that this is airing two, three weeks before an election is not surprising to me at all, but the CNN executives said that “the network’s effort to present the unvarnished truth about the Iraq war led it to televise portions of a video that shows insurgent snipers targeting US military personnel. The tape, which came to the network unexpectedly,” sort of like just over the transom, ladies and gentlemen. They were minding their own business at CNN, trying to figure out how to destroy the Bush administration in other ways, and lo and behold, here comes a tape from the insurgents!
Yes, the tape “came to CNN unexpectedly through contact with an insurgent leader. It was first aired Wednesday night on Anderson Cooper 360 and then repeated on Thursday. In one instance, the tape shows uniformed members of the US military milling in a public area with Iraqis. A shot rings out. CNN fades the screen to black before the result, described as a victim falling forward, is visible. It’s one of ten separate sniper attacks on Americans documented on the tape which CNN technicians,” and remember these are the people that can’t figure out how various things pop up on the screen when Dick Cheney is speaking.

“CNN technicians concluded that the tape was authentic. ‘Yes,’ said David Doss, executive producer of Cooper’s show in a web log entry describing the network’s decision of what to show. CNN could not determine the identity of any of the sniper victims.” Well, does CNN happen to know who the terrorist was? Does CNN happen to know who the insurgent was that delivered them this propaganda tape that they determined was worthwhile to show the unvarnished truth about the Iraq war? Is this not the truth about any war? Good guys and bad guys fire at each other, and sometimes they hit the target. What in the world is newsworthy about this? 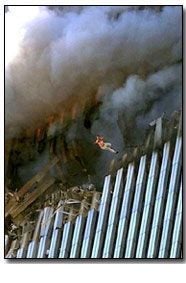 What in the world is “unvarnished” in terms of truth about this, as opposed to any other truth in war? The truth about war has been so obliterated by the American Drive-By Media that Americans who have not been taught sufficiently about war in the public school system must have a totally convoluted view of what it is. Is war a video game? Is war something that lasts a year or two? Is war something where you don’t take any casualties? Is war where you get shot three or four times and live to tell about it 30 minutes later? What the hell is war to these people at CNN? Unvarnished truth, my rear end!
“CNN understood that some critics might find the tape had public relations benefits for the insurgency, Doss admitted that on his log. ‘We also understood that this kind of footage is upsetting and disturbing for many viewers, but after getting beyond the emotional debate, we concluded the tape meets our criteria for newsworthiness.'” Yeah, well, it’s your criteria for newsworthiness, CNN, that is the question, not the US military, not the Iraq war. Your criteria for what makes news is precisely the question that millions of Americans have with CNN! It is no accident that CNN’s ratings have been plummeting for years.
It is no accident that more and more people are seeking news elsewhere, particularly in a time of war, when this ought to be CNN’s big chance to show how they’re better than everybody else. This is not what the American people want to see. This is the kind of thing that can backfire big time among those who do see it and as we are taking care of today, those who hear about it. Our previous caller said people take the issue of national security with them into the ballot box. Things like this at CNN will certainly help fulfill that philosophy. We have audio sound bites on this. Here is Anderson Cooper from Wednesday night, how he introduced the special report from CNN correspondent Michael Ware.
WARE: Tonight you’ll see how some Americans in Iraq are getting killed. The killings were videotaped by the insurgents and made available to CNN. There is no doubt the footage is disturbing to watch. Our decision to run it has not been taken lightly. This story, shocking as you may find it, is one that we believe needs to be told.

RUSH: Spare me, Anderson! Spare me your holier-than-thou, smarter-than-everybody-else rhetoric. You want to show how some Americans in Iraq are getting killed. Why not show how every American is getting killed? Why don’t you get in league with the insurgents and the next time they’re going to set up one of these IED devices or roadside bomb so that you can be there and film that — and, by the way, let’s see the videotape of how they did that to Bob Woodruff at ABC. Why don’t you show us that?
Bob Woodruff, ABC anchor, was injured while he’s embedded — and of course all we got was how brave he was. We got just yards and yards and yards, miles of videotape on Bob Woodruff and whoever else was hurt and killed with him. We don’t know who these American soldiers are. They’re not worth enough to find out. They’re not worth hero status. It’s not worth it to CNN to find out who these men were and to follow their progress after being injured to maybe a hospital or an infirmary. Nope! Let it be a journalist, it would be an entirely different story.
It’s offensive and insensitive to say the least. But the arrogance and the condescension that they presented this is what blows me away. “No doubt the footage is disturbing. Our decision to run it has not been taken lightly. The story, shocking as you may find it, is one we believe needs to be told.” Really, the story that people die in war? The story is that the enemy kills us? It’s a story that’s news to you, and you think Americans ought to see it? For what purpose? Don’t tell me you people are so na?ve and ignorant that you just figured out that people get killed in war. I refuse to believe you’re that dense. 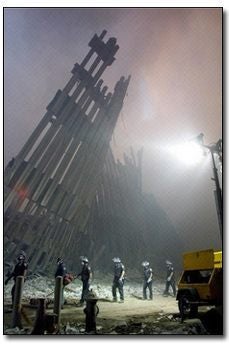 So you must have a political reason for showing this. There’s a political decision behind showing this. You think and you hope the American people will be so repulsed by seeing what happens in war that they will continue to demand that we get out or not support it and elect your buddies, the spineless, linguini cut-and-run crowd of the Democratic Party. That’s what CNN’s decision was totally based on. Let me ask you this, Anderson, if the US military, as an institution or an individual, sent you a videotape showing how we are killing insurgents and terrorists, would you show that, or would you not because you would have fear of inciting Muslims and Islamofascists?
I know you’ve shown videotape from a distance of a Jeep being blown up supposedly carrying terrorists, but would you give us the up close and personal view of an American sniper killing the enemy? How many of them have died, Anderson? Why don’t you look into that. This reporting is totally devoted to how many Americans have died, but you never give us the body count of on the other side. If you’ve got videotape that shows American snipers shooting insurgents, would you show it to us under the auspices of…? No, I don’t need to answer the question. The only video you’ll show are the still shots of what you think are torture at Abu Ghraib. Somehow the torture at Abu Ghraib is more offensive to you than this, the death of American soldiers. Here is a portion of the CNN correspondent, Michael Ware, and his report.
WARE: A sniper is watching these American soldiers. You’re looking at the unobstructed view from the sniper team’s vehicle. And they are waiting for their moment, as the soldiers mingle with Iraqi civilians. People are around them, the sniper spotter, he seems to be operating the video camera. Wants me to find another place? No, no, no, comes the reply. Give me a moment, and then — the soldier falls forward. You hear the sniper’s vehicle stop and then slip away. CNN obtained the graphic tape through intermediaries from the Islamic Army of Iraq, one of the most active insurgent organizations in the country. It is titled, “Latest sniper operations in Baghdad.”
RUSH: Isn’t that just cool? So CNN’s in league with the snipers, has a contact somehow. Do you think they would ever impart the information to the US military so that these guys could be dealt with? No, of course they can’t get involved. CNN cannot violate its cherished principles of journalism by choosing sides, it can’t do that. It is just there reporting what’s going on — and here is Anderson Cooper after the report.
COOPER: Just a production note. We dipped to black at points in that report so as not to show the moment of a bullet’s impact, and I should just restate that sniper video and the interview with the insurgent that you just saw are exclusive to CNN.
RUSH: Oh, good.
COOPER: Sniper videos have appeared on the Internet and elsewhere on Arab-language stations around the world, this video has not.
RUSH: Oh, good, Anderson, it’s for ratings! You want us to know that it’s exclusive to CNN. I’ll tell you what I take from that. The insurgents think they’re in bed with you.
END TRANSCRIPT