Now, people are telling me that they have seen Michael J. Fox in interviews and he does appear the same way in the interviews as he does in this commercial for Claire McCaskill. All right, then I stand corrected. I’ve seen him on Boston Legal. I’ve seen him on a number of stand-up appearances. I know he’s got it; it’s pitiable that he has the disease. It is a debilitating disease, and I understand that fully. Just stick with me on this. 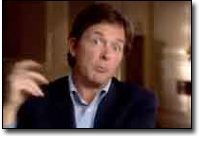 All I’m saying is I’ve never seen him the way he appears in this commercial for Claire McCaskill. So I will bigly, hugely admit that I was wrong, and I will apologize to Michael J. Fox, if I am wrong in characterizing his behavior on this commercial as an act, especially since people are telling me they have seen him this way on other interviews and in other television appearances.
BREAK TRANSCRIPT

Let me just say this about it. The reason I went and grabbed the audio from John Edwards, where he said in 2004 on the campaign trail, “If we can do the work that we can do in this country, the work we will do when John Kerry is president, people like Christopher Reeve are going to walk, get up out of that wheelchair and walk again.” That was about stem cells, and that was a misleading statement, and it didn’t work for the Breck Girl, implying that if it weren’t for George W. Bush and his stubbornness on stem cells that we’ve got a cure for spinal deterioration and injury, and we don’t. We do not have anywhere near a cure. We can’t we regenerate nerves yet, folks, and that’s what has to happen to cure paralysis in the spine. Stem cells do not promise any such thing, nor do they for Parkinson’s disease. So the reason that I went and got the Breck Girl to compare it to Michael J. Fox is because I think the intent here is the thing. I think, if I may be blatantly honest, brazenly so, I think this is much more offensive than Hillary’s Senate opponent implying that she’s ugly.
Michael J. Fox is allowing his illness to be exploited and in the process is shilling for a Democrat politician. In the process of doing that, creating an impression like John Edwards tried to do that is not reality. Michael J. Fox is using his illness as a way to mislead voters into thinking that their vote for a single United States Senator has a direct impact on stem cell research in Missouri. It doesn’t, and it won’t. So Mr. Fox is using his illness as another tactic to try to secure the election of a Democrat senator by implying that with her election, that we’ll be on the road to stem cell research her opponent opposes and people who suffer from Parkinson’s disease as he does will have a cure. It’s a negative ad, and negative ads work, and people criticize them all the time as I am doing to this one, but when you see it, there’s something wrong about it in the get-go. It’s the exploitation of someone’s illness. I wonder if this would become a trend and all kinds of illness were being exploited how people would end up reacting to it and feeling about it. So if this was not an act, then I apologize. I’ve not seen this type of appearance by Michael J. Fox before and that’s why it struck me the way it did. But despite all that, I mean it’s pitiable and it’s very sad anybody has this disease, because it is debilitating in ways that people that don’t have it don’t even understand. But to exploit it like this in misrepresenting the political agenda of a particular candidate, there’s nothing admirable about that.
BREAK TRANSCRIPT

I must share this. I have gotten a plethora of e-mails from people saying Michael J. Fox has admitted in interviews that he goes off his medication for Parkinson’s disease when he appears before Congress or other groups as a means of illustrating the ravages of the disease. So lest there be any misunderstanding, we talked about a half hour ago of the commercial that’s running for Claire McCaskill featuring Michael J. Fox on what appears to be when he’s off his meds. I have never seen him this way and I stated when I was commenting to you about it that he was either off his medication or acting. He is an actor after all, and started hearing from people, “Oh, no, I’ve seen him on TV this way, this is how the disease has affected him when he’s not on his medications.” Then the e-mails started coming in saying he’s admitted not to taking them in certain circumstances so as to illustrate how the disease affects people. All of which I understand, and I’m not even critical of that. Parkinson’s disease is hideous.
Let me just stress once again in what I said in closing this out, that I think this is exploitative in a way that’s unbecoming either Claire McCaskill or Michael J. Fox, because in this commercial for Claire McCaskill he’s using his illness in a way to mislead voters that there’s a cure for Parkinson’s disease if only Claire McCaskill gets elected, if only Jim Talent is defeated. And of course it’s all about stem cell research, which is a huge ballot initiative in Missouri anyway. I’m sorry, Missoura. He pronounced it Missoura. There are two ways to pronounce my home state, Missouri and Missoura. And Missoura, in certain sectors is the preferred pronunciation. It is a way to relate to certain Missourans. We never say Missourans, we say Missourians. But it’s a way to reach out, “I understand you, I know your state” and so forth. There’s a lot of politics in the commercial. But Mr. Fox was allowing his illness to be used as a tactic to trying to secure the election of a Democrat senator who is going to somehow, her election is going to lead to the cure for Parkinson disease via stem cell research because her opponent, Jim Talent, opposes it, which is not true. He may oppose embryonic stem cell research, does not oppose adult stem cell research or even cord blood, I don’t believe, research, umbilical cord research. 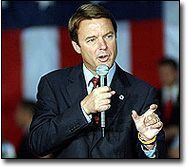 The comparison is obvious, and that is to the Breck Girl, John Edwards, who did the same thing by saying Christopher Reeve will walk again if only John Kerry is elected because we will do the work that needs to be done. And that kind of thing, when you start making false promises to people who suffer from diseases like this that are horrible and debilitating, when you start telling them that there’s a cure right around the corner if only somebody gets elected, you are misleading them, you are creating a creating a false-hope scenario, and that is cruel, if you ask me, that is cruel and it is mean to lead people to believe that we are much further along in research than we are. There’s nobody involved in the research who is saying we’re anywhere near any kind of a cure for spinal disease, paralysis, Parkinson’s, Alzheimer’s. In fact, the closest we are to Alzheimer’s is nicotine. I mean supposedly nicotine will limit or lessen the impact of Alzheimer’s down the road. And now they’re also saying it about pot, the evil weed.
So let there be no misunderstanding about this. I stand corrected, did not know and had never seen Michael J. Fox in the way I saw him in this commercial for Claire McCaskill. But people have and have seen him say in interviews that he doesn’t take his medications when he wants to make an impression to show people just how horrible the disease is. And it’s true of all Parkinson’s patients. At some point the medication will not work, and the condition will become permanent, and there’s nothing pleasant about it. It’s one of the most frustrating diseases one can have. Pope had it. It’s not pleasant in any way, shape, manner, or form, nor did I mean to implicate that one could easily act it out for the purposes of a commercial.
END TRANSCRIPT