RUSH: Ladies and gentlemen, it appears to me now that Michael J. Fox is actually an October Surprise being utilized by the Democrat Party. Let’s go to the audio sound bites first. Today on WFLD-TV in Chicago, at noon, anchor Pat Elwood reported that Michael J. Fox story and who he’s campaigning with there.

ELWOOD: Actor Michael J. Fox is getting involved in local politics on a grand scale. He will appear later today at a fund-raiser for Democratic congressional candidate Tammy Duckworth. Fox has Parkinson’s Disease, as we know, and now he is campaigning this fall on behalf of candidates who support embryonic stem cell research. In Missouri Fox has recorded a commercial endorsing Senate candidate McCaskill. The incumbent Republican, Jim Talent, opposes using human embryos for stem cell research [sic]. The issue is a big deal in Missouri this fall. It’s the subject of a referendum [sic]. The commercial of a PSA is getting lots of buzz and some biting comments from talk radio host Rush Limbaugh. He said Fox was — quoting here — ‘either off his medication or acting.’

RUSH: And I was right. He was off his medication in the commercial. But here again, you see how this stuff happens and gets spread? This is WFLD-TV in Chicago. This is totally misleading, and this reporter doesn’t know any different. This anchor doesn’t know what he’s talking about. He’s just reading the wire copy on this. I’ve seen the wire story. , which is what Fox says in his ad. That’s how this stuff boomerangs. Then there’s this, a little story from the website of KARE-TV, Channel 11.

‘A television ad for Democratic Governor Jim Doyle is the latest done by actor Michael J. Fox, who’s backing candidates across the country who support embryonic stem cell research. Fox has Parkinson’s Disease,’ blah, blah, blah. It goes on to report that: ‘Fox speaks directly into the camera, with his Parkinson tremors evident, is asking voters to re-elect Doyle. Fox says Doyle’s Republican opponent, Mark Green, has stood in the way of research that could lead to cures and new jobs. Congressman Green has voted against expanding federal funding for the research because days-old human embryos are destroyed to obtain the cells.’ 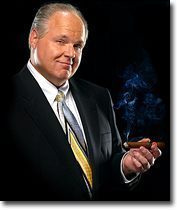 The dirty little secret is that George W. Bush authorized embryonic stem cell research with existing stem cell lines. Some are opposed to expanding them, but the stem cell research goes on! Talent doesn’t stop it in Missouri. This guy doesn’t stop it in Wisconsin. So it looks to me like Michael J. Fox is a Democrat Party October Surprise. Now he’s up there doing fund-raising for Tammy Duckworth, which, folks, is entirely okay. Do not misunderstand. I’m just saying that the extensive use of Michael J. Fox by the Democratic Party does not insulate him against criticism for the substance of what he says in these commercials.

It’s terrible he has the disease. It’s sort of riveting to watch him suffering the ravages of this disease. You wouldn’t wish it on anybody, but when you get down to what he’s saying, it doesn’t give him insurance against criticism for getting into the political arena, which is the point I made in the first hour. When you enter the political arena and you start stumping for candidates, and you start announcing things and making statements, if they are not true, you are opening yourself up to criticism, and just because you are a victim of a disease does not protect you or insulate you from that. But that’s the Democrat strategy. See, now the story is not what Fox is saying. The story is that Rush Limbaugh is criticizing Fox for his appearance in the commercial or what have you. Now, we’re monitoring these people. Inside Edition and all are doing stories. We’ll report on how they misrepresent all this.