This Is A Human Cloning Bill, Not A Stem Cell Bill in Missouri

RUSH: Let me tell you about Missouri. There is a couple that alone has spent $28 million on advertising to get Amendment 2 ratified and passed by the citizens of Missoura — Missouri — Missoura — Missouri. Twenty-eight million dollars. Now, some people are wondering, ‘Twenty-eight million dollars by two people to get an amendment to the Constitution passed?’ So there are people beginning to wonder, ‘Do people have a financial interest in this?’ I’ve always said, ‘Follow the money, and you will get to many answers to many questions that you ask,’ and I think the point’s a good one:It’s just like the environmental movement. The environmental movement wants us to believe that their only concern is us and the planet and cleanliness, anti-pollution, fresh water, plenty of animals, no extinct species, people living at one in happiness and in communion with each other. 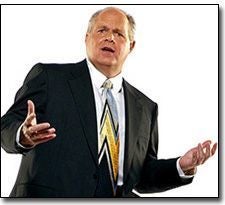 When in fact, everybody in the militant environmental movement is out there raising money left and right, flying around in their private planes, cutting down redwood trees for their backyard decks — they’ve got a financial stake in it. Plus they’re ideologues. They’re anti-capitalists, and they’re using this ‘environmental’ movement as an advancement of their anti-capitalist views. When it comes to stem cell research and embryonic stem cell research, precisely because there is no evidence it works — there’s none, folks. You can sit out there and have hope all day, and you can hope until the end of the world, and if there’s no evidence, your hope is going to be just that. I’ll draw a parallel.

In 1984 I was watching This Week with David Brinkley and all these global warming scientists are starting the fear-mongering, ‘We’ve only got 20 years! We can’t afford to wait! We don’t know if what we think is right. We’re pretty sure, but we have only 20 years. If we don’t act in 20 years, it’s all over. We’ll lose the ability to reverse the effects of greenhouse gases and climate control.’ Well, there never has been — I don’t care what anybody says — convincing, unassailable-with-empirical data that human beings are causing climate destruction. I saw a story the other day claiming global warming will cause floods, famines, earthquakes. Hell, folks, we have those anyway! Don’t we?

We have famines. We have earthquakes. We have floods. We have big thunderstorms. We have hurricanes — whether there’s global warming or not. It’s scare tactics. You can’t say that those are going to be the of global warming when they happen anyway. Now we’ve got embryonic stem cells. There’s no evidence (they cure anything). There’s no evidence! I’ll give you another analogy. The October Surprise, 1980. Remember when that was? Reagan supposedly sent George H. W. Bush in an SR-71 to Paris to talk to the Iranians. They cut a deal to keep those hostages in there until after the election. ‘We’ll make a deal with you. You let ’em out after,’ and that’s exactly what happened.

When Reagan was elected, the Iranians let the hostages go — but there was no evidence (of a meeting)! A Princeton professor, a guy named Gary Sick, wrote a book, it was all over television, “confirming” that Bush had flown in a plane or whatever, gone over to Paris to meet the Iranians. It wasn’t true! Tom Foley, speaker of the House, said, “Despite the fact there is no evidence, the seriousness of charge demands that we investigate.” So there was a long investigation by a “blue-ribbon panel” to find out if there was an October Surprise. what’s happening with embryonic stem cell research.
There is no evidence!
There’s evidence aplenty that other attempts, other types of research and techniques are showing promise. But no, no, no! We’ve gotta focus on embryonic! There’s no evidence, and yet people are investing $28 million trying to pass it. There’s a reason for this, folks. The argument with embryonic stem cells is over , because there is no venture capital going into the movement (venture capital meaning private investors, people like you and me with a lot of money), who are looking and saying, “Yeah, you know what? That looks promising. I want to get in on the ground floor of embryonic stem cell research, and I will clean clocks. I’ll make so much money!”
There’s none of that money going into it because nobody looks at it as anything other than a black hole! But if you can get funding, if you can tug at people’s heart strings, and if you can say that Jim Talent and if you can say that Michael Steele don’t people to get cured, that only Claire McCaskill and Benjamin Cardin do… If you want to tell people that the cure for disease resides in the election of Democrats, then you can do it — and you can lie through your teeth and you can mislead and you can cruelly misinform people, which is being done. There’s no evidence, and yet it remains the big push. So there’s gotta be some other things involved here, and it’s the desire on the part of these people to get limitless federal money, your tax dollars, to be spent on a black hole.