What I Mean By “I Feel Liberated”

RUSH: I’m probably going to make a mistake trying this because there’s not a whole lot of time in this segment. Sometimes even I am amazed. Yesterday I said on this program, in response to a question, ‘How are you feeling?’ this was not something I worked on the night before, a big monologue. ‘Okay, folks, I have a major announcement.’ I got a bunch of questions from people in the e-mail telling me how they felt. They were depressed and so they asked, ‘How do you feel, Rush?’ The first thought that came to my mind: I feel liberated. ‘What do you mean by that?’ 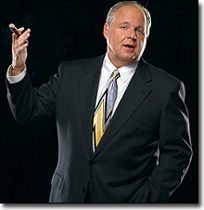 I said, ‘I’m tired of carrying the water for people who don’t deserve having their water carried,’ and from that, hell has broken loose. I was lying! I’m abandoning the GOP! I somehow admitted that I’m no longer going to read the White House talking points when I never, ever get the White House talking points. Some twerp on television last night said, ‘A-ha! See? The White House had this big meeting with conservative talk show hosts. They got in there and they got their marching orders and they went…’ I wasn’t invited to that! I wasn’t invited because they knew I wouldn’t go. I don’t do group things, number one.Number two: they know they can’t influence me that way, and now this. This is from Hampton Roads.com, our radio station in the Hampton Roads area is WNIS 790 and they’re running a contest there, a little survey today on, ‘What did Rush really mean? Is he leaving the GOP? Is he angry with President Bush? What do you think he meant? What effect, if any, could his comments have on the Republican Party?’ So I got an e-mail from a friend last night who totally understood it. ‘Rush, I loved your water carrying comment. It’s so true. I was thinking about just how awful presidential debates have been, well, forever. Not one minute of those debates would make for good talk radio. The fact is the best candidates the parties offer up can’t present their cases very well or don’t.

‘They’re desperate for help in making their arguments, neither side looks very good right now without the media. I was scared every time Bush had a debate, the Democrats were scared every time Kerry had a debate. I was scared when Ford had a debate. I was scared once when Reagan had a debate,’ and this is exactly right. What do they have after debates? They got zillions of people in, what? The Spin Room, and what does The Spin Room do? The Spin Room tells you what the candidates were trying to say but didn’t or couldn’t or botched, in the case of Kerry. In my case, this is probably as good a way as any to define this for you. I can’t think of any examples off the top of my head, but as you know, I’m a conservative. Conservatism’s home is the Republican Party.

I believe that conservatism triumphing over liberalism is the best thing for the country. Okay, so we may have some Republicans who are not conservatives, are not very good at articulating it, and they get slammed and they get criticized all over the place — and guess who rides to the rescue? Those of us on talk radio. We defend ’em, we say what they really think when they can’t say it or don’t want to say it or don’t have the guts to say it, and bail ’em out. Then it comes election time, and they still won’t say what they are. They still won’t be conservative because they’re afraid of it, and so I’m simply — if they’re not going to go out and articulate their conservatism, I’m not going to let ’em depend on me to get them over the hump.

They’re the ones running for office. I’m not. I’m a radio guy. If they can’t make the case, if they can’t carry the banner, then it’s their problem — and I’m not abandoning the Republican Party and I’m not joining the Democrat Party. I’m not doing anything of the sort. (sigh) Sighs of frustration. Carry the water. How complicated can something like that be made? Far more complicated than I ever thought. I actually believe, folks, that when you utter as many words as I do — I don’t have guests; I take some phone calls — it might be impossible to be taken accurately and in context, because so few people want to make the effort.

Do you realize how many words I utter in a ten-minute monologue? Probably three chapters of a book, or one. Whatever, it’s huge. Five hours of discussion on the Michael J. Fox issue, and one sentence and one four-second bit of video looped to make it look like it was 12 seconds or 15 becomes the story. All I’m telling you is if a conservative wants to be conservative and is a conservative and says he’s conservative, he’s going to have to be on his own from now on. I am not going to make sure it is understood that these people are what they are. If they can’t learn to express it, if they can’t overcome the fear and be who they are, then it’s their problem, not mine. It’s all I’m saying.