9/11 Wasn’t Enough To Wake Up Americans

RUSH: Flemington, West Virginia, Donna, nice to have you on the program, and welcome.CALLER: Oh, Rush, this is certainly a thrill. Oh, my goodness.RUSH: Thank you.CALLER: Remembering Pearl Harbor, could you give a little history on the great debate back in 1940-’41 and the isolationists in Congress which were stating that we should stay out of the European war, and of course the attack on Pearl Harbor killed isolationism and replaced this with a single-minded determination in this country to win the war. And, Rush, I have a son in the Marines, and I fear that this country will have to experience an even more severe attack than 9/11 before we wake up and unite together to win this war on terror. 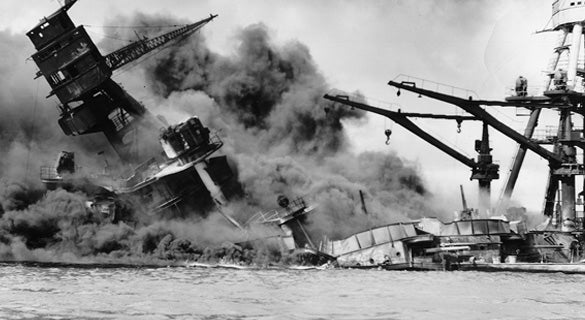 RUSH: Well, I do. I do. I understand it perfectly well. That’s why it’s frustrating, but I understand it perfectly well. We are a very rich, very affluent, mobile, upwardly mobile country with lots of economic opportunity and lots of opportunity for fun. We have more time and opportunity for pure hedonism in this country than has ever been known to exist outside of ancient Rome. And as such, people don’t want to get in the way of that.

(doing impression) “Come on. I mean, okay, so they blew up the World Trade Center, just a mere episode. Terrorism is a fact of life. We’re going to have to learn to live with it. Why are we going off to Iraq and off to Afghanistan? Why do we go off to war? We’re the United States of America. I don’t want to have to be bogged down with this. It’s troubling me and I don’t like all the discomfort I see on television every night. I hate these 30-minute sound bites in the newscast where I see a car blown up and a bunch of dead bodies and smoke. I don’t want to watch that. I just don’t want to watch. Can we just end it?”

People don’t want to be confronted with grim reminders of reality during periods of such affluence and opportunity, don’t want anything to get in the way of the good time.You couple that with the natural partisanship of conservatism and liberalism and the arguments between the two ideologies, and then you add to this recipe a little dash of Bush hatred and they don’t want any part of it. We’re going to eventually do the right thing. I’m optimistic, at some point, Donna, the people of this country are going to wake up. It’s going to take a lot more than 9/11 obviously. This no longer a theory, this is reality. 9/11 wasn’t enough. It’s going to take some more. At some point, something will happen, mark my words, of the equivalent of what you just described Pearl Harbor was on the American people, December 7th, 1941.You want historical parallels? I find it fascinating. People forget this. Why did we go to Iraq? Why did we go to Iraq after 9/11? Why, Saddam didn’t attack us. The Japanese hit us on December 7th, 1941. Where did we first enter World War II? Europe. We entered it in the European theater. When the Germans invaded Poland and Hungary, we didn’t do anything. It wasn’t until the Japanese attacked us that we said, “Uh-oh, we got a problem in Europe,” and we went to Europe and we dealt with the Japanese, not long after, but that was truly a global conflict. But whatever the commensurate event in the future of that will equal in terms of the impact on the American people Pearl Harbor was, I don’t know. It’s obvious 9/11 wasn’t it.