RUSH: Fascinating e-mail here. I didn’t know that Gallup conducted polls — I guess it’s not really a poll — it is and it isn’t, I guess — but I didn’t know they did this via Internet and via e-mail. I always thought they used telephone calls to people that they considered to be part of their qualified sample. But I got a note here from a subscriber at RushLimbaugh.com.
&lt;i>”Dear Rush: I just took a Gallup poll that came to me via e-mail. One of the questions this was: Regardless of whether or not you agree with him on the issues, please indicate if you ever consider the views of each of the following leaders when shaping your own opinions about various public affairs issues. The options were A, yes, I consider their view, depending on the issue. B, no, I never consider their view, or C, I don’t know this person. The people were listed in groups of five”&lt;/i> 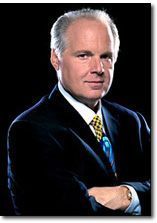 And I was in a group of five. There were more than five, but the group of five — and I don’t have everybody that was listed, but I do have the people in my group. In my group of five, Bill Gates, former President Bill Clinton, radio talk show host Rush Limbaugh, CNN newscaster Larry King, and entertainer/activist Bono.
Now, the guy that sent me the e-mail says, “I thought it was interesting they had you right below Clinton and right above Larry King. I’m not sure if we’re supposed to share these poll questions with you, Rush, but I thought you’d find it interesting and I’d keep a lookout for results in the near future. Merry Christmas.” This from Jacob from parts unknown. I’ll protect his identity here. Now, some might say, “Rush, you have just corrupted the poll.” Absolutely, ladies and gentlemen. This is a setup if I’ve ever seen one. Don’t know this person. No, I never consider their views. This is a setup. Be on the lookout, ladies and gentlemen.