RUSH: I’m a little hoarse today. I’m feeling great, feeling fine, no illness. I was up late last night consuming adult beverages, and for some reason — normally, not getting much sleep does not affect my voice, but — I’m just a slight bit hoarse today. I had a big meeting yesterday afternoon, and when I finished that, I went home, and before I went out to the thing I had to do last night, I watched Sylvester Stallone’s new movie, Rocky Balboa. As a powerful, influential member of the media, I am shown these things in private in my own home theater. Before I put it into the machine and watch it, I said, “What else is there to tell in this story? There’s been Rocky through Rocky V,” and I have to tell you, I was surprised. I was dumbfounded. It’s a great movie. 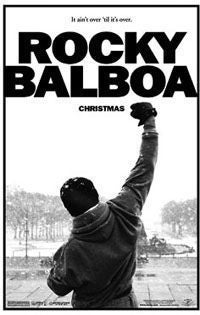 I’m not a movie critic and that probably is good. I just look at it as a normal consumer. It’s going to appeal to all demographics; it’s a great love story. There is a scene in this movie between Rocky and his son, and it’s really poignant because the son really doesn’t like Rocky because Rocky is so big. He lives in Philadelphia. Rocky is so huge that the kid can’t get out from under his shadow, he doesn’t think — and without giving away the plot too much, Rocky’s kid begs him not to do something that would put him more and more in the spotlight again.
“Come on, dad. It’s my turn. You had your turn. You’ve gotta let me out of your shadow.”
Now, in today’s age, the odds are good that a father would say, “Oh, oh! I don’t want to hurt my son. Okay, son, well, I’ll just slink away into the background, and I don’t want to get in your way,” you know, how we’re all touchy-feely like Barack Obama is portraying himself to be with his big ears. But Rocky — and this occurs on the street in the Philadelphia — Rocky just gives this kid an inspirational tongue lashing like you wouldn’t believe. It surprised me, given the movie climate and the Hollywood climate and the whole cultural climate that we are in today. It looks like all the other Rocky movies. They haven’t jazzed it up with a whole bunch of computer-generated bells and whistles and things like this. I was really surprised. What else can they tell in this story? But they have found something. Stallone wrote it, I guess, and directed it. It’s really good. I was surprised.