RUSH: Remember, I told you last week, broke the story that Bill Nelson, Senator from Florida, went over talking to Bashar Assad against the wishes of the White House. It’s typical: Democrats go meet with the enemy. He said that Assad was totally open to the Baker-Hamilton Surrender Group report talking about using help from Iran and Syria to alleviate our problems in Iraq. 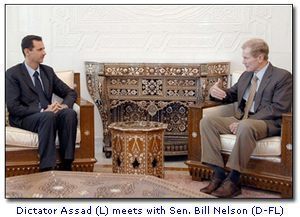 Well… “A state-run Syrian newspaper on Saturday criticized remarks made recently by Senator Nelson, accusing him of spreading a series of lies about his meeting with Bashar Assad. The newspaper said it was ‘strange that some US senators who visited Syria were very gentle, diplomatic, and attentive while in Syria, but immediately after they leave Damascus they turn upside down, start making up stories and tales that exist only in their fertile imagination.’ The state run newspaper said Nelson’s remarks are ‘strange’ and condemned them.”
All he did was basically say, “Hey, Assad said he was all for helping us out.”
So much for diplomacy.
Don’t you just love these guys? Senator Nelson decides the president can’t handle this; the president doesn’t know what he’s doing! We gotta get these people involved! We have to get out of Iraq! We’ve gotta get Iran, and we’ve gotta get Syria working with us. He’ll handle it. Arlen Specter is going. Kerry went. He meets with these guys! They go meet with dictators; they go meet with tyrants! The tyrants are nice; they look human, and tell the senators whatever these idiot senators want to hear. The senator come out, “I have brokered peace! Assad is willing to help,” and now Bill Nelson is being portrayed as a blithering idiot liar by the man he trusted more than he trusts George W. Bush.