RUSH: There is beginning to be a split in the Democratic Party. It’s becoming pronounced now and obvious — and, by the way, this is a See, I Told You So. I was able to predict after a presidential press conference that the Iraq Study Group, the Surrender Report, was doomed for the ash heap of history. I said, “If you ask me, I’m hearing from experts everywhere — military, civilian — we need more troops in Iraq.” Now Hillary’s come out opposing it; Dingy Harry’s come out in favor of a ratcheting up of troops. The president appears for it. Senator McCain is still making that a hallmark of his policy on what to do in Iraq. Teddy Kennedy has come out against more troops, saying he doesn’t agree with Senator Reid.
He has profound respect for Senator Reid, of course, but he doesn’t really agree with him about any of this. Let us go to the audio sound bites. This makes me wonder what the Democrat base, the kook-fringe base thinks now of the Senate majority leader in favor of a temporary increase, because you know how they’ll interpret that: “There’s nothing temporary in troop increases! Why, that’s going to be permanent! Why, we’re supposed to be getting out of Iraq.” Here’s Mrs. Clinton. She was on the Today Show today with Meredith Vieira, and she was asked if she thought we should send more troops to the region. 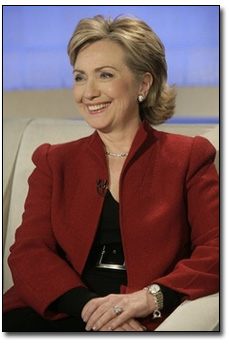 HILLARY: I am in favor of sending more troops to continue doing what our young men and women have been told to do, with the government of Iraq pulling the rug out from under them, when they actually go after some of the bad guys. I am not in favor of doing that unless it’s part of a larger plan. Let’s see the plan. You know, I’m not, um, going to believe this president again. I did that once. (fake laugh)
RUSH: A-ha-ha-ha! It’s time now to make the break, Mrs. Clinton. If anybody doubts that she is running, that’s it. That little bite right there is all I need to know that she is running. is a direct statement to the base of the Democratic Party. Fox News Sunday, Ted Kennedy. Chris Wallace says, “Let’s start with Iraq. The president reportedly is considering an option to send another 50,000 troops, as he wants nothing less than victory. If that’s what it takes to stabilize the country and protect us from terrorism, isn’t that worth it?”
KENNEDY: I don’t believe that that would stabilize, uh, the country, nor do I think it would bring victory. Since the Hamilton report has been issued, we — 40 Americans have been killed.
RUSH: So what? Hold it, hold it a minute. What does one have to do with another? Nothing! Here’s the rest of the bite.
KENNEDY: Our military has been in Iraq longer than World War II, World War I, uh, longer than the Vietnam War.
RUSH: Stop the tape. Stop the tape, sorry. Yeah, let’s see, World War II didn’t quite go as long as this war, but what was the total casualties, American casualties, deaths and so forth in World War II? I know the number. Does it just pop up into your mind? Try 300,000. It was a world war, Senator Kennedy, 300,000 Americans died. What’s the death count in Iraq? Because you guys are just keeping a score of this. You can’t wait. It’s around 2,954 but I don’t know if that includes the 40 that Senator Kennedy’s talked about died since the Iraq Surrender Goup’s report. We’ve fought in Iraq longer. We’ve lost basically 3,000 troops. Shorter period of time for World War II and what’s the point? This is meaningless. Is war a football game and the clock’s ticking and if you don’t get it done within a certain time frame you leave? Apparently so, to the Democratic Party. Uh, sorry, Democrat Party. Here’s the rest of this inane sound bite.

KENNEDY: On everything that they possibly could. This country is in chaos! There are now a hundred thousand refugees that are leaving Iraq every month. Uh, Jordan has sealed its borders. Lebanon has sealed its borders. Uh, they’re rushing into the Middle East. Uh, we have, uh… We have 700,000 refugees that are coming into Jordan. It’s like 30 million people entered the United States over the last two to three months!
RUSH: This is inane. These are non sequiturs. By the way, if Jordan has sealed its borders, how do 700,000 refugees get in there? If a hundred thousand refugees are leaving Iraq every month, then pretty soon there’s not going to be an Iraq — and that may be the way to win the policy. Drive everybody out of there go in there and take over the oil and establish Halliburton government and be done with it. I’ll tell you, these people are dangerous. Now here’s Senator Kennedy, The Swimmer, splitting from Dingy Harry. He was asked to comment on Dingy Harry’s remark which you’ll hear in a moment that he supports a temporary increase in the number of troops. 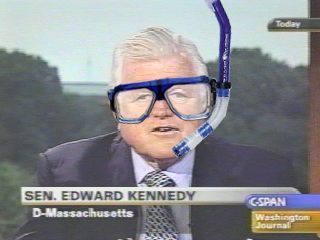 KENNEDY: I respect Harry, uh, Reid on it, but, uh, I — I — Uh, that’s not where I am. I, uh, agree with the generals who have appeared before our Armed Services Committee and think that what the — wooah — what an enhanced — just as we saw the enhanced troops in Baghdad didn’t quiet Baghdad down, the — the generals have testified before, uh, the Armed Services Committee think that we would add to being a crutch for the Iraqi civilian government in not making the right judgments, decisions.
RUSH: You know, there’s another way to look at this, and it’s just another way to look at it, but how long has this been going on? Three years, and the general consensus is even though there are arguments about this, the general agreement is that it’s chaos and we’re not doing well over there. We could have done much better than we’re doing. Now, the president has said throughout that he’s been listening to the generals, and it was the generals that came up with the policy, and the generals that said, “No, we don’t need any more troops right now. It was fine and so forth.” Could it be that maybe the generals have screwed up? I don’t know. Maybe it is time for a new direction. Maybe we’ve been listening to the wrong people for enough time now that changing strategery and changing policy might make sense, and you get some input from some different people. Not the think tank crowd! You don’t want that. Ted Kennedy, here’s a guy who the military but can’t wait to sign on to ’em when they happen to say something before his committee that he happens to agree with.
BREAK TRANSCRIPT
RUSH: All right, audio sound bite #10 just to wrap this up. This is Dingy Harry on This Week with George Stephanopoulos yesterday, and he was asked if he would oppose an increase in troops in Iraq.
REID: If it’s for a surge, that is for two or three months, and it’s part of a program to get us out of there as indicated, by this time next year, then sure I’ll go along with it.
RUSH: All right, well, it has caused some — I wouldn’t say rifts — in the Democrat Party, but let’s not be under any false illusion here that these clowns are totally unified.