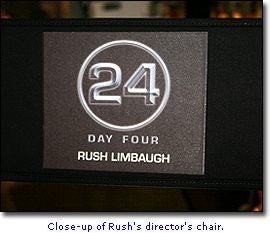 RUSH: So I watched The Nativity Story on Friday, and I told everybody that I would have my thoughts on it today. I’m going to be honest with you about one aspect of it. None of these releases that they send me — it’s interesting how they all do it. They imprint my name in a very faded, white font or graphic, fairly large, right in the middle of the screen. After awhile you forget it’s there. So when I was watching Rocky Balboa, he’s at the cemetery visiting the grave of his deceased wife, Adrian, and the frame put my name on the tombstone, and I thought, “My gosh, they’ve got me dying,” and I had to realize that it was the imprint.
Now, the reason they do this is so that if any people that get preview copies of these things make copies and run around and they know who did it and then all hell is unleashed on you. Another thing they do is that they put these movies on four-by-three letterbox form which means four-by-three is the standard TV size and then they make that a letter box so that it does not fill any screen you watch it on. I don’t care how big. I watched on my 15-foot high definition rear projection screen, and it showed up in a 16X9 letterbox format but it didn’t fill the screen. They do that also as a means of preventing copying. Sometimes they’ll take the voice track out of sync with the video. So they don’t send you a perfect copy. They do this on purpose, and I understand all this. They also do not closed caption these things. In the case of Apocalypto, it wasn’t a problem because that whole thing was captioned since all the dialogue was in Mayan.
So when it came to Rocky Balboa, I picked up quite a bit of it. I watched it twice. I picked up quite a lot the first time, even more the second time when I had familiarity with the scenes and what was coming. The Nativity Story, the accents that some of the actors have made it tough to understand the dialogue in the opening ten to 15 minutes of the movie, but remember when I talked to Stallone last week and I asked him how tough it was to get this movie made because it’s been 16 years since Rocky V, and he said it was very tough because everybody said, “The franchise has been cooked! It’s been milked for all it has,” and it took quite a lot of effort and time for him to get it made. I have to think… This movie, one of the companies behind this New Line Cinema and I happen to know that there are a couple of Rush Babies in the executive team at New Line Cinema, and their names are in the credits, and I have to think it took these guys a effort to get this movie made, and I think one of the things that succeeded in getting it made was probably the success of The Passion of the Christ. I don’t know how well it’s doing at the box office.

Here was my take on it. It is magnificently, beautifully done, and it tells a story that all Christians know. We know the story by having read it, and we’ve seen artists’ portrayal of the nativity scene, and we’ve heard, at Christmastime from the time we were children, the story of the three wise men and the bright star, and we’ve heard science say, “Ah, it wasn’t anything special. It was just probably some outer space phenomena.” Scientists try to apply all of these theories to explain what the ancients saw and what they were writing about and so forth. It starts out with a prequel and gives you about five minutes of life at present for those days, and then goes back one year earlier, and it tells the story of the year leading up to the birth of Jesus. Probably the last 20 minutes, 25, 30 minutes of the film, if I remember right, is devoted actually the manger scene and the three wise men arriving.
I have to tell you the way it effected me: I got a lump in my throat watching, because I’m a profound believer, a true believer. I got a lump in my throat watching the way this was portrayed on film, something that I have thought about my whole life, something that I have been taught, something that is part of every Christmas, at the least, the whole story. To actually see it portrayed with the best effort, I’m sure, to be accurate in terms of circumstances, life circumstances, dress and so forth at that period of time, I got a lump in my throat, a little tingle down my spine. It is… It’s… My descriptive powers fail me here because I know exactly how I’m thinking about this and what I’m feeling about it. It’s tough to put into words. There’s almost a mythical feeling.
I’m 55. All of these years, hearing the story read to me, seeing still pictures, artist’s renderings, when I was a kid my imagination running wild as I heard the story and so forth, there becomes a mythical, supernatural quality to it — and the movie doesn’t do that at all. The movie portrays this that these just average, normal run-of-the-mill people. There’s nothing special about them in any sense. It just tells the story as it was. When I say average people, what I’m talking about is in the crowd of people they live with there’s nothing particularly remarkable about them that set them apart from anybody else, any of their friends or associates — other than at the beginning of the movie when the word spreads that this birth is going to happen, the prophecy that it is going to happen, and that gets everybody all worked up and there are efforts made to prevent the birth from happening, as you know. King Herod is featured prominently in this movie trying to wipe out every newborn baby under two years old after this happens. It’s really, really, really well done. I think it runs about an hour, 40 minutes.
People have asked me, “Well, it’s PG. Can I still take my kids?” I would. If you’re raising them this way, I certainly would. It was compelling. It’s one of those things you know what’s going to happen. In your own mind you’ve created your own mental images. You know what’s going to happen and yet I sat there and watched it and enjoyed it, and I was more easily able to understand the dialogue as the movie progressed. (But that’s not their problem, that’s mine.) So I’m unable to share with you all of the dialogue, and some things I missed may have been profound in terms of the way the writers wrote it. So I don’t mean to make a problem with the movie because of that. I’m just telling you my ability to have heard all the dialogue was impaired, somewhat, and this happens, by the way, at every movie. If there’s dialogue during crescendo type music or so forth, I’ll have to ask somebody I’m watching with to hit the pause button and say, “What did they just say?” or turn on the closed-captioning if it’s available. You’d be surprised. You ought to turn on closed-captioning anyway (it doesn’t take you long to get used to it), and you’d be surprised what you miss, especially on shows like “24,” where much of the dialogue is whispered while the music is going and the bombs are exploding and this sort of thing. At any rate, I liked it. I was affected by it. It established, even more so, the Christmas season for me. That’s The Nativity Story.