Caller: I Did Not Scam You, Rush 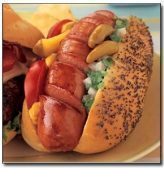 You remember the guy, Jeff from Solon, Ohio? He’s was the guy everybody thought was tricking me. His mother wouldn’t let him spend any money on Allen Brothers steaks, and so he called here, and everybody thought he was angling for a freebie, and people (and you know who you are) responded in an e-mail with sufficient anger, mad at me that I didn’t see this obvious trick and succumbed. Well, he’s been listening and he’s fed up with all of these allegations that have been made by some of you people.
His subject line here: “I Did Not Scam You — Rush, I’m the one to whom you generously gave a Rush PAC. I want to assure you I’m not a scamming liberal but a recently graduated high school student working to achieve my dreams. Thanks again, Jeff in Solon, Ohio.”
So he doesn’t say whether he’s liberal or conservative. Well, he says he’s not a liberal. He said he’s not a “scamming” liberal. He could be a liberal, but he’s not a liberal (laughing).