RUSH: Snerdley and I were discussing the NFL playoffs at the break here at the top of the hour. I asked him what he thought of his Cowboys backing in, sneaking in, and he says, ‘Ah, it doesn’t look too good.’

I don’t know. If Parcells can get the quarterback’s head turned around… Parcells says their quarterback there, Tony Romo, has an overconfidence program. He’s gotta rein him in. Seattle has a porous secondary. The Cowboy’s Terrell Owens and Terry Glenn could have a field day. You never know what’s going to happen, which reminded me that some strange things are going on in Philadelphia involving the Iggles. As you know, Donovan McNabb was hurt earlier in the season. Jeff Garcia has taken over at quarterback, and they won the NFC East. This has caused Mama McNabb, who has been made famous with the Campbell’s soup commercials to become concerned. This is amazing. Wilma McNabb actually wrote something on her son’s website, DonovanMcNabb.com. 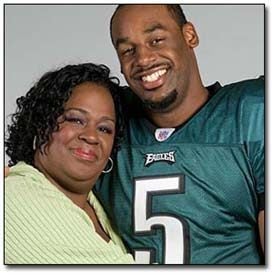 She said, ‘We want our team to win and even go to the Super Bowl and win it in Miami. But oh, oh, if they win the Super Bowl without my son [Donovan], what would be the real outcome with the fans? Will they crucify him? Maybe, then the trade talks would begin. Offseason madness, worse than last year’s fiasco. But guess what? I guess I’ll have to take the beating if it comes. I would have to hope that scenario of the madness would not happen or be that bad. Let’s wait and see.’ Could you imagine? You know, I love mothers and everything, but you gotta keep ’em away from the website. A mother putting on the son’s website that you’re worried the fans of Philadelphia are going to crucify your son if they go to the Super Bowl without your son as the quarterback? (Whistling.) And then, over the weekend, in the New York Times, there was appear article on McNabb that of course mentioned me, referred to me as ‘marginalizing’ McNabb way back, whenever the year was, during my ill-fated tour with the ESPN Pregame Show.

This story is all about McNabb’s thoughts on the plight of black quarterbacks. I think it’s Bill Rhoden, William Rhoden that wrote the story, and he concludes that Philadelphia will ‘lose its soul’ if it throws him over the side, throws him overboard for Jeff Garcia, who is the current Philadelphia quarterback who says, ‘Hey, I’m just trying to win. This is Donovan’s job. It’s not mine. I’m just trying to win.’ So what is all this talk about the pressure and the plight of black quarterbacks? I thought the media didn’t care about that and that’s why I was lambasted for pointing it out. But here how many years later, we have a story, and Mama McNabb even got her little blurb there on her son’s website, and everybody is concerned about the pressure McNabb’s facing because his team is winning without him. Philly may crucify him, may through him overboard. Now Bill Rhoden of the New York Times is talking about the pressures faced by black numbers in the NFL! I knew I was right all along, which is why I never felt the need to apologize.