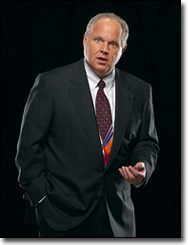 CALLER: I just want you to know where I’m coming from. I?m retired thirty-two years in the Navy, retired as a W-4 warrant. The question I wanted to ask you most of all, and let me tell you this, I voted for George the first time; I didn’t vote for George the last time. And the reason I didn’t is I was upset with the House and the Senate. And for six months you kept saying, ?Do you want Pelosi in the House? Do you want Harry Reid there? Do you want Pelosi, do you want Harry Reid.? For three months, you had my attention. I sat down and starting recording when I couldn’t be home and I watched these people. I watched the doctor on your side, or used to be my side, and I watched Hastert, and I got confused what the four were doing, and the more you kept doing that the more I kept watching them. To tell you the truth I’ve become an independent. I did vote for the Democrats this time. I’m hoping they’ll do a better job.
RUSH: All right, what are you saying here?
CALLER: You kept saying Pelosi —
RUSH: Frank, are you telling me that I made you vote for Pelosi and Democrats should be in power?
CALLER: Well, you made — well, they were going to be ahead of the party, and you made me change my mind, sir. I’m not saying I’m going to stick with this, but I started watching the four of them.
RUSH: I made you change your mind?
CALLER: You did.
RUSH: I had nothing to do with it.
CALLER: Well, you kept saying, every day, you almost said, do you want to see her —
RUSH: Yeah, but then you went and started paying attention, and what they did changed your mind, which would be an embarrassing thing for me to admit, but —
CALLER: Well, I watched the other side, too, sir, I watched the doctor, and —
RUSH: What doctor? Oh, Frist.
CALLER: Yes.
RUSH: You speak in code out there, Frank.
CALLER: Well, he’s stepping down, too, I noticed.
RUSH: Fine. So I told you, do you want Pelosi, do you want Reid? And you went out there and studied them and fell in love with them? I mean, you can’t blame me for that.
CALLER: I watched them for two months and I went back and started watching the doctor and Hastert, I watched them, I watched them, and I watched them, and they was not giving the other side time to even say what they wanted to say.
RUSH: I get it, so you’re calling here to gloat. You are telling me, ?You said, do you want these people? You thought that paying attention, Rush, would drive me away, and I ended up liking these people, so it’s your fault.? You?re calling to gloat for the fact that if it weren’t for me, you wouldn’t be happy today. Way to go, Rush. I can take it. No problem.
END TRANSCRIPT